The collection, called Princess Vera Wang, is an extension of the designer’s fragrance of the same name, which she introduced in 2006.

By Marc Karimzadeh and Evan Clark on June 21, 2012
View Slideshow 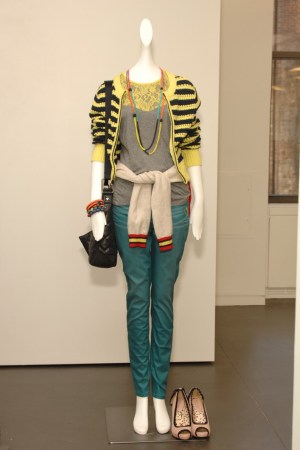 NEW YORK — For Vera Wang, shopping with her daughters Cecilia, 21, and Josephine, 17, is a favorite pastime. Wang learns about their generation’s style on those trips to Bleecker Street or Madison Avenue, and the experience is now proving to come in handy as she launches into juniors apparel and accessories under the Princess Vera Wang moniker.

This story first appeared in the June 21, 2012 issue of WWD. Subscribe Today.

The collection, which officially launches at Kohl’s next month, is an extension of Wang’s fragrance of the same name, which she introduced in 2006.

“It made sense to leverage the success of the Princess fragrance into a complete juniors collection,” the designer said. “For me, it is also my chance to express the inner youth of my creative head. I love the freedom to mix and match at will, to layer and color, style and express fashion with energy.”

The collection embodies a younger spirit than anything Wang has offered so far, and is based on several teenage archetypes, like rock princess, preppy princess and flower princess. Case in point: an ocelot printed top layered over an orange tank, plaid twill pants, cropped blazers and graphic printed T-shirts — the kind of clothes girls might need for back-to-school. There are also handbags and shoes in the launch assortment.

Mario Grauso, president of Vera Wang, said the Princess brand “has resonated for us in a powerful way, even internationally. Vera and I felt strongly about expanding it at some point, and talked about doing more of a lifestyle collection within the brand.”

The lineup, priced at retail from $12 to $84.99, will be exclusively available through Kohl’s, which, since 2007, has been selling the Simply Vera Vera Wang line. Kohl’s official launch date is July 9, though merchandise will start to trickle into a select number of doors as soon as Friday (the promotional department store needs to carry merch for two weeks before it can mark it down).

Overall, the new categories are estimated to have retail sales of $36.3 million for the fall season, with apparel being the largest category at $27.9 million.

For Kohl’s, the addition could lift its overall juniors business, which “has been tough for us the last couple of years,” admitted Wesley McDonald, Kohl’s senior executive vice president and chief financial officer, at the Jefferies 2012 Global Consumer Conference this week. “It continues to be tough in the spring.…We also, obviously, didn’t have as much of a color denim. That’s a big trend in juniors, so that’s been rectified for back-to-school. We’ll be a big player in that business. So just like any other year, there’s always some content issues that we can improve upon.”

Wang and Grauso see Princess expanding into a soup-to-nuts lifestyle brand with the same kind of breadth of Kohl’s Simply Vera line. Asked about potential categories, Grauso cited cold weather and home as areas Wang would like to explore for Princess.

For Wang, it’s not just an additional business but also provides a way to snag her future clientele at an early age. “That’s certainly something we hope for,” Grauso said, adding that once that customer is captured, “We can then give her an offering through her wedding and beyond.”