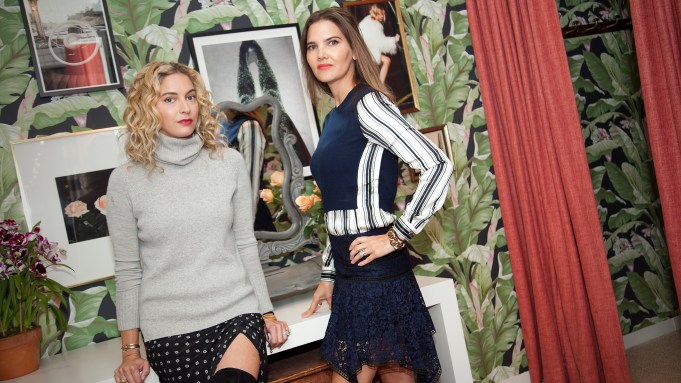 Those with a passing knowledge of the American contemporary label Veronica Beard might associate it with a few things, namely the dickey, which is its signature item, and the fact that the line is operated by two sisters-in-law, nee Veronica Miele and Veronica Swanson, who improbably married into the same, ready-to-brand name.

That aside, the contemporary market is crowded and it can be difficult to stand out on a department store floor. Thus the importance of one’s own retail holy grail, a freestanding store, the first of which the Veronicas, as they’re known, opened today on a prime piece of real estate at 988 Madison Avenue on the corner of 77th Street, formerly the Lisa Perry store.

“This is our moment to actually be in 3-D,” said Swanson Beard. “As much as you try on the web site — our content is creative; it’s new, and the imagery is all originally produced — there’s nothing like walking in a store.” Swanson Beard and Miele Beard made a point to create an environment that felt less like a store and more like an apartment, an expensive but homey one designed by Carolina de Neufville. The result is the opposite of the purely minimal white space of Perry’s day and a vivid depiction of how the Beards see their world. The interior doesn’t feel cluttered, but it’s full in a warm way, set with matching leopard print sofas, Turkish kilim rugs, antique mirrors and brass fixtures. One set of dressing room walls is painted in a black-and-white windowpane pattern; the other’s covered in rich botanical wallpaper that brings to mind the Beverly Hills Hotel. The a rotating selection of photography by Harry Benson and artwork by Voltz Clarke Gallery artists including Christina Burch, Holland B. Cunningham, Sara Genn, Natasha Law, Mary Nelson Sinclair and Elaina Sullivan, hangs on the walls and all of it is for sale.

The bulk of Veronica Beard is ready-to-wear, but “you have to have enough deliveries and enough product to open a store,” said Miele Beard. To her point, with the store comes the launch of a hat collection of fedoras done in collaboration with Gigi Burris with a “flair bar,” where customers can choose their own hat embellishment (feather, ribbon, etc.) They’re also stocking a mix of third-party vendors to flesh out the offering and rotate on a monthly basis: Bluemercury skin care and makeup, Active Argan facial oil, Vintner’s Daughter active botanical serum, By Kilian fragrances and candles, Corroon totes, Hunting Season handbags, Kate Young x Tura sunglasses, Anniel footwear, Commando undergarments, The Laundress fabric care, Assouline books, and Heritage Affairs fresh florals. There’s also jewelry from House of Lavande, Latest Revival, Mercedes Salazar, Paige Novick, Samantha Knight and Shebee.

“We always talk about lifestyle, and it’s the most overused word in the world,” said Swanson Beard. “But we want to create that for the customer so she really understands that you’re not walking into a white box with eight hanging racks and one beige sofa and a beige rug in the middle of the room. We want to wow you.” The Veronica Beard ethos is inspired by the Veronicas, both tall, attractive working mothers — they have eight children between them — who’s lifestyle is stylishly grounded yet clearly of means.

Today marks the official opening of the store, but Veronica Beard actually did a test run in the space for seven weeks between May and July, using the raw space left by Perry to open a summer shop. Originally they were going stock only spring and summer deliveries, but they added pre-fall to the mix too. “It was like gangbusters,” said Miele Beard. “We realized people always want new product no matter what the season is.” The temporary store closed July 16 for a design overhaul.

Miele Beard and Swanson Beard launched Veronica Beard in 2010 with the dickey jacket — blazers, jackets, puffers with one-size-fits-all, zip-in sweaters and hoodies — as their core concept. In 2013, they took on investment from Andrew Rosen, John Howard, Lew Frankfort and Khajak Keledjian. The following year they reduced their prices, originally set at opening designer, by 30 percent to enter the advanced contemporary market.

The business now stands at about $25 million a year. Veronica Beard is carried in 250 retailers, including 36 Neiman Marcus stores. “I was personally very instrumental in guiding them from the opening price point designer collection where they began to the advanced contemporary space where they are today,” said Neiman’s fashion director Ken Downing. “The Neiman Marcus customer responded immediately to their product.”

First-year sales projections for the store are $4 million and there are plans to roll out between five and 10 stores in the next two years. They mention SoHo, Los Angeles and San Francisco in reference to future locations, though no leases have been signed. “We’re not forcing it,” said Miele Beard. “Certain addresses you have to wait for. You have to pray on it for a year. It’s in the plan, but we’re not going to chase or rush this. Just like Madison took time, SoHo is going to take time.”