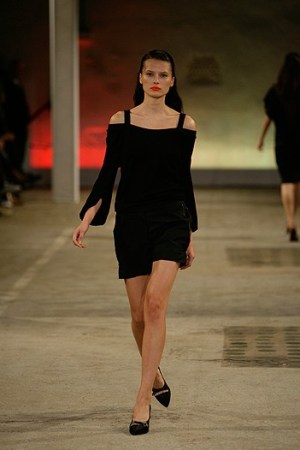 PARIS — Veronique Branquinho, one of Antwerp’s next generation of fashion stars, has succumbed to the recession and will close her 11-year-old fashion house, WWD has learned.

Her company, James NV, majority owned by Branquinho, is in court-appointed liquidation for a three-month period, according to a statement released in Belgium on Thursday.

Branquinho’s closure comes a day after Christian Lacroix SNC in Paris sought court protection from its creditors and underscores how vulnerable wholesale-dependent fashion firms are during the economic crisis.

Citing its intent to cease all operations, James NV blamed a sharp drop in orders for its fall/winter 2009/2010 collections, and a plethora of canceled orders and nonpayments for the past spring/summer season.

A court-appointed attorney is said to be supervising the winding down of the company, but it is not clear what will happen to collections in production, including the men’s fall-winter line.

Branquinho, which counted about 50 wholesale clients, operates one store on Nationalestraat in Antwerp, which remains open to clear out stock, the company stated.

The designer, 35, could not be reached for comment Thursday. However, it is understood she will devote her energies to her role as the new artistic director of the 180-year-old Belgian leather goods brand Delvaux and continue as a professor at the University of Applied Arts in Vienna.

Branquinho, subject of a 10-year retrospective last year at Antwerp’s MoMu fashion museum, burst on to the international fashion scene in the late Nineties alongside a pack of other Belgian talents, including Raf Simons, Olivier Theyskens and A.F. Vandevorst. Her first collection of billowing skirts and lacy sweaters made headlines and attracted the attention of top stores around the world.

Yet even more established Belgians like Ann Demeulemeester and Dries Van Noten weathered some tough times, especially in the aftermath of the 9/11 attacks in America and the formation of Europe’s big luxury groups. Fashion had also swung away from their strong suits — tailoring and sobriety — in favor of feminine frills and bling.

“It’s more difficult than it was in the beginning,” Branquinho told WWD in 2006, citing a decline in her women’s wholesale business. “[Retailers] used to be more loyal. Now it’s more about figures. They’re buying safer. They invest more in established brands.”

A graduate of Antwerp’s Royal Academy of Fine Arts, Branquinho was a guest designer at the Pitti Uomo trade show in Florence in 2004, a year after she launched her men’s collection. She has also designed for Ruffo Research, the 3 Suisses catalogue in France as well as costumes for theater and movies.