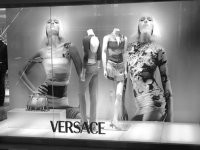 MILAN — Versace is looking at Column B.

After planting stores in key Chinese cities of Shanghai, Beijing and Hong Kong, the house is now expanding in secondary cities with an aggressive plan for growth in the world’s most populous nation.

Lured by China’s economic potential, over the past year, the company bought back its Chinese franchise, setting up Givi Hong Kong; renovated its existing stores in the style of Milan’s Montenapoleone model, and has registered a 10 percent increase in sales there.

This year, Versace is focused on a retailing strategy aimed at such cities as Harbin and Weng Szuù this spring and Guangzhou in the fall. Over the next three years, the company plans to open eight additional locations for Versace and 16 for Versus and Versace Jeans Couture in China. In addition to setting up a press office and showrooms in Beijing to control the brand’s alignment there, Versace has increased its advertising budget by 20 percent for the year in the area.

“China has the potential to become even more important than Japan, in terms of sheer numbers, with 10 percent of the Chinese population adding up to more of the total Japanese population,” said Santo Versace, chief executive officer, in an interview last Thursday, before prepping for the fall show, which will be held here today.

Versace attributed the growing importance of China to a political and religious stability and the people’s hard-working ways and passion for business.

“We opened our first store in Hong Kong back in 1980 and realized that the Chinese are commercially the strongest in the world and extremely fast-paced,” he said.

Daniele Balestrazzi, chief financial officer, added that Hong Kong’s handover to China did not hamper the expansion of the city.

“Actually, we saw a stronger development and a shift in consumer nationality, with more Chinese from the mainland who replaced the traditional Japanese customers,” said Balestrazzi. There are six Versace and two Versus boutiques in Hong Kong.

The company’s bold colors and patterns and strong fashion statements generate strong brand awareness in China. According to Far Eastern Economic Review magazine, in 2001, Versace ranked first in brand awareness in Shanghai, followed by Alfred Dunhill, and second in a survey entitled “Labels I want to buy,” after Dunhill.

Among bestsellers are Gothic DV items. “This line is very successful, [especially] the brights — the Chinese love colors and patterns,” said Versace. Watches and fine jewelry are also high on the list of bestsellers. Among the accessories, Versace said that a “rainbow buckle” handbag decorated with colorful watch straps for spring sold “extremely well.”

Balestrazzi said the company has an average 80 percent sell-through and that “women are very up-to-date” in China, especially in Shanghai and Beijing. “It is no longer a male-oriented society, and a large portion of women work today,” he said. Sales of the men’s wear collections account for 60 percent of total sales. “We are edging towards a 50-50 share.”

“This is an extremely successful boutique, and we finished the month of January 35 percent ahead of sales plans,” said Santo Versace. In January, the house opened a boutique in Shanghai. In that city, there are two other signature line boutiques that were renovated last summer as well as a Versus boutique. Last fall, the company also doubled the size of the Beijing Palace Hotel boutique and opened a Versace Collection store in Shenzen.

While China accounts for about 6 percent of company’s roughly $500 million in overall sales, or about $30 million, Versace said he projects a 20 percent increase in sales there.

Versace also said the craftsmanship and manufacturing capabilities in China are more qualified than one might expect, ranging from microprocessors to aerospace production plants. “We don’t produce anything there yet, but we are considering it,” he said. “The quality of sportswear is high.”