Launch of capsule collection coincides with the opening of the retailer’s latest store in Osaka. 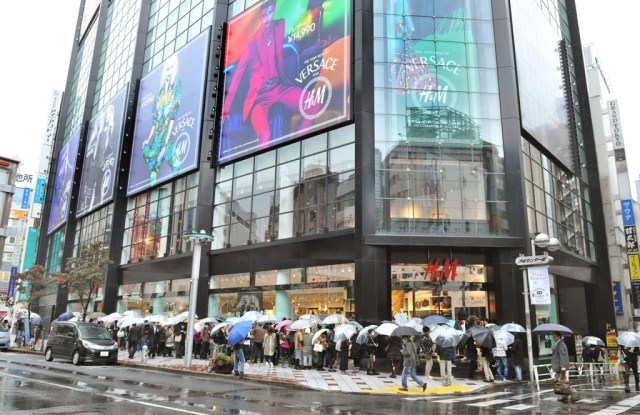 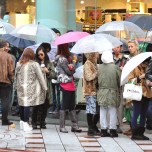 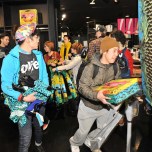 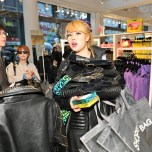 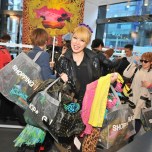 TOKYO — The Versace for H&M line launched in Japan on Saturday to coincide with the opening of H&M’s latest store in Osaka, the retailer’s 15th in the country. A prelaunch VIP party was held on Thursday evening, and while quantities were extremely limited, guests got a chance to snap up their favorite pieces before the official launch. On Saturday the Osaka store was due to open at noon, but staff members made the decision to open 30 minutes early due to the pouring rain outside. At that point there were about 400 people waiting to get inside, according to an H&M spokeswoman.

The reception in Tokyo appeared more muted and the incessant downpour of rain probably did not help matters. At Tokyo’s Shibuya store, about 250 people were lined up 30 minutes before the 10 a.m. opening time. A group of six students were first in line, having waited outside in the cold and rain since 6 p.m. on Friday. Many others in the line had only arrived shortly before the store’s opening.

“We’re here with other people so it’s not so bad,” said Juntae Kim, a 23-year-old student living in Tokyo. “We took turns eating fast food but we didn’t sleep at all.”

Kim said that once inside, he hoped to be able to buy the entire Versace for H&M collection, which he planned to sell to those who chose not to brave the crowds. “I’ve already taken orders and now I have to try to get as much as possible,” he said. Inside the store, he seemed to be successful, as he ran to the checkout with his arms laden with colorful pieces, even tripping on a dangling scarf and falling in the process.

But he seemed to be an exception. Most Tokyo customers appeared to purchase specific items rather than just buying anything they could get their hands on.

As of Saturday evening not long before closing, the H&M in Shinjuku still had an ample selection of dresses, handbags and shoes. A few blankets were all that was left of the home collection and a couple last-minute shoppers grabbed pillows. A small rack of pants — including the leather-studded variety — and long coats with leather sleeves were all that was left of the men’s collection.

“The men’s stuff sold really, really fast,” said an H&M spokeswoman. “The women’s did as well, but we were quite prepared for that. In particular the leather jackets were very popular — they’re completely sold out in Osaka.”

The line’s debut was a bit of a gauge for brand awareness of Versace in Japan. The Italian house made headlines in 2009 by closing down its stores in the country and revisiting its strategy. It has since tiptoed back into the market with a very limited presence in a few department stores.