Taking Them to the Cleaners: Vetements x Maxfield Event Draws Crowd, Sells Out of Merchandise

Vetements x Maxfield Dry Cleaning event draws 1,500 to view the installation, while selling out of limited-edition items in the store. 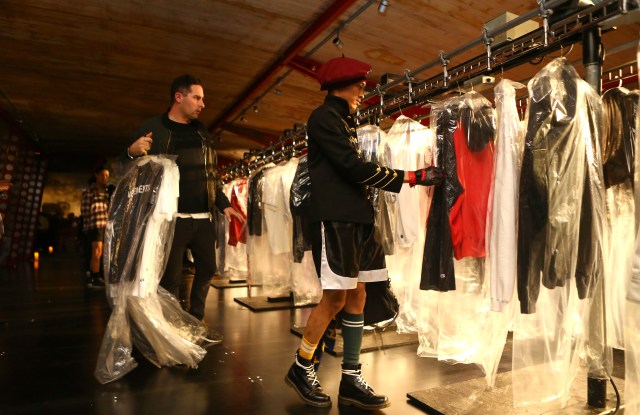 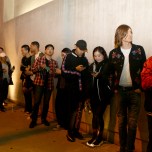 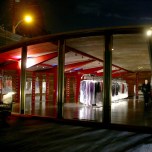 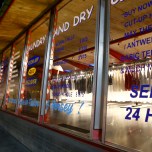 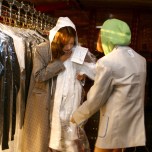 Vetements pulled off an event in Los Angeles the night of Feb. 9 that drew 1,500 people, and it had nothing to do with celebrities, a fashion show or a see-now-buy-now collection.

It was an open-to-the-public event at Maxfield, advertised on the company’s 1.4 million followers-strong Instagram feed, featuring a fashion-as-art installation and exclusive merchandise, plus regular collection pieces that won’t hit other stores for six months, along with current Vetements inventory, for sale from 8 p.m. to midnight.

The windows of the Jean Prouvé house were decorated to look like a dry-cleaning shop.  Katie Jones/WWD/REX/Shutterstock

“For me, it’s not about selling,” said Vetements chief executive officer Guram Gvasalia, on hand for the event. “I don’t like the wording of see-now-buy-now. It’s not where we are going, but I think it’s interesting to give people an opportunity to get something before everyone else can.”

To that end, there were limited-edition T-shirts and hoodies emblazoned with a colorful “Beverly Hills” logo and priced from $330 to $875. There were also select pieces from the Vetements collection currently in the Paris showroom, only 50 of each stockkeeping unit, on offer for one night only. Among them was a T-shirt screen printed with what looked like old movie poster images. Also for sale, the “Staff” T-shirt originally made as a Christmas present for Vetements staff, for $150. “There are always pieces we do without margins, like the raincoat last season, so that younger kids can afford them,” he said.

These coveted items went to those who began lining up at 5 p.m. in a queue that snaked around the block-long store and parking lot. For those who came simply for the spectacle, there was no line to step inside the emptied parking lot, where Maxfield owner Tommy Perse’s prize Jean Prouvé glass house was transformed in to a high-end dry-cleaning store, complete with a motorized rack imported from New York, displaying current-season merchandise. The actual for-sale merchandise was inside the store, but hundreds more crowded into the glass structure and courtyard to ogle, chat and sip beer and wine served in red plastic cups.

If the vibe was strangely college-kid-meets-high-end-shopper, that’s because the cult brand has managed to attract a loyal international following that often times, is both.

Student Jere Sher, from Eastvale, Calif., was the fifth person in line at 5 p.m. and was just paying for his “Beverly Hills” T-shirt at the counter close to 9 p.m. “I just like their designs,” he said.

“I think this kind of experience, even if you wait, creates a certain pleasant memory, and it’s very different from clicking a button and putting in your credit card number,” said Gvasalia, who sat earlier in the day to chat over a Coke while the pieces were being installed.

“We did an event a few months ago in Korea outside of Seoul. All my Korean friends laughed and said no one would travel one-and-a-half hours from the city. But people came 17 hours before we started and there were crowds outside wearing $6,000 jackets sleeping on the ground. In 15 minutes we sold out of 5,000 pieces,” Gvasalia described. “It was not like Black Friday in the U.S. Everyone gave each other space. It was such great energy to see all these people who actually wear the brand buying pieces.” He recalled waiting in line for 12 hours as a student in London, to buy ticket for a Leonardo Da Vinci exhibition. “These 12 hours you never think about anymore, but you think about the exhibit you saw.”

Gvasalia, who runs the company with his brother, creative director Demna Gvasalia, and no outside investors, spent five weeks in the U.S. last summer just to study department stores and outlets. “It’s a very scary reality. You feel physical stores aren’t selling as well as you think they are. Fashion is always portrayed as this dream world but actually it’s a very real world. It’s a normal job with certain tasks that need to be done.”

Shoppers wait in the courtyard at Maxfield for a chance to get inside and shop.  Katie Jones/WWD/REX/Shutterstock

Of today’s numbers-driven climate, he said, “It’s all about growth and ‘growth’ is a such a dirty word to me. I read the trades and they all speak about 17 percent here, 10 percent there for internal growth — no one speaks about profits — but I look at our company as a baby and I feel after a certain age the baby comes to a certain height and needs to stop growing. All these companies are trying to jump over their own heads.”

Vetements produces in limited quantities partly to make a statement about overproduction in the clothing industry. “We all have too many clothes anyhow. We don’t buy because we need it. Then it’s just about multiplication of this production, and most companies don’t care what’s happening with their clothes. You just click a button if you want it; you go to a store you if you want a physical experience. This is what we are trying to create with an event. It’s not just about buying, it’s about being together and having a certain connectivity and memory.”

To drive the point home, Maxfield’s windows were filled with 30-year-old inventory that the store later donated. “In Korea, we took all the waste from the production and put it in the entrance. Same here to show that yes, we are selling clothes but at same time there’s so much in the world. So ask yourself, ‘Why do I need it?’ and if we decide not to buy this is not a bad thing. The world will start going in the direction of slow fashion. My mom still has Margiela pieces from the Nineties that she wears.”

To satisfy the appetite for both the new and the beloved pieces, Vetements will begin producing core pieces, or perennials. “Before the concept was to do a show and sell everything. But today shows are tricky because if you do what people expect you to do, everyone thinks you didn’t try enough and it’s all safe. If you do something completely different, people say they want to buy those pieces they bought previously. So you show the new ideas, and you also start understanding what the loyal customer wants. We’re creating a commercial line giving you this security that you can always find certain items like a Macintosh coat.”

Of his brother’s design ethos, he said, “It’s his vision and I don’t think anyone has the right to tell him what to do. I think this is why the company has been so successful so quickly, because we let each other do the job. Without any investors or partners you can be very free. It’s missing in the big groups. Sometimes they say something not because they think it’s the right thing but because they are getting a paycheck and they need to say something.”

In order to get away from the noise, Vetements is moving the 40-person company slowly to Zurich. Through a friend, he rented a four-story, 15,000-square-foot building (a former Philipps factory) in which one floor will be devoted to an archive.

“I needed to move out of Paris for personal reasons. But also my French is not great and to run to a lawyer every time to ask questions is just too expensive. I have a law degree from Germany where I grew up, so I wanted to be in a German-speaking place. What I love about Switzerland is the air and the people are amazing and you also feel very safe. I also think our team came to a stage where we all needed a clean slate,” he explained.

Gvasalia owns three black iPhones, one of which he uses to manage Vetements’ Instagram account. A quick look at his stats screen shows 9 million impressions this week, 62 percent women, 39 percent men. The top cities by market are Seoul, London, New York, Paris and Hong Kong. But by far the greatest number of followers is in the U.S. “If you add cities two through five together that’s the same as the U.S.,” he said.

“The sales here in particular the last couple of months have been crazy. I get calls from our p.r. saying this person is wearing it and she’s not the right representation. But if the person went and bought it, it means she understood it so let her wear it. Be nice to people because Karma is a bitch,” he laughed. While he didn’t specify who the person was, Paris Hilton is a known fan and shopper.

Maxfield’s buying director Sarah Stewart, who presided over the event, said, “We had wanted to do something with Demna for a while and when he came to look at the spaces, he just fell in love with the Prouvé house. Guram had some ideas floating around too, so you just wait for the right opportunity to plop that idea into a real place.” Of the crowd, she noted, “It probably hasn’t been like this since our Apple Watch launch event.”

Inside, Patrick Hsu and a band of friends had taken over an empty display pad with piles of merchandise, each item sheathed in a plastic dry cleaning bag with a claim ticket instead of a price tag.

“I’ve been following Vetements for maybe two years. It’s cool because they basically make basic stuff not basic anymore. It looks basic but when you wear it, it goes well with how you want to express yourself. They are literally printing stuff on blanks and making it look a lot better,” he said.