By Jessica Iredale and Aria Hughes on September 10, 2015
View Slideshow 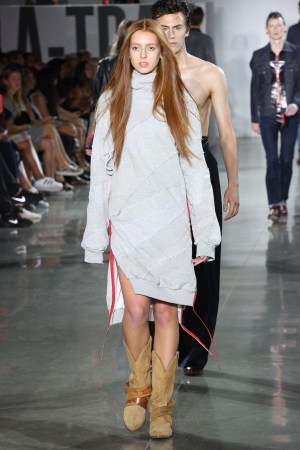 The VFiles runway functions a bit like a Gen Art, Project Runway or CFDA/Vogue Fashion Fund show, but for a different demo. Also, there’s no winner — everyone who participates is a winner in this fashion fringe-fest. It’s less Vogue, more V, from whence VFiles, which is a media/Internet/e-commerce/bricks-and-mortar operation, descended. If you are not familiar with VFiles, you are likely not its audience, who appeared to be going to or from a rave. If you didn’t feel at home in the crowd, you also might have experienced feelings of rapid aging or radical conservatism during the show.

The energy and enthusiasm were as high as the jumps and aerial stunts performed by professional BMX rider Nigel Sylvester, one of the three entertainment acts that broke up the traditional — er, that’s not the right word — runway proceedings.

First up was Kozaburo by Kozaburo Akasaka, the most classic of the five designers chosen by the VFiles community to participate in the show. His take on Western included patchwork jeans with Swarovski rivets, tailored denim jackets with zipper closures and duct tape panels, and high-waisted wide leg trousers. The most singular look was a Yetilike, faux fur ensemble adorned with red zipper tape.

Moses Gauntlett Cheng, a collection by a trio of designers, was billed as clothes made “as a response to the city in which [the designers] reside — borne [sic] out of a necessity to challenge the status quo” in the program. Surprise: It was a gender fluid lineup modeled by gender fluid models, almost all of whom were bearing his or her nipples, newly developing breasts, and bulges in clothes that looked like they were outtakes from the late Nineties Victoria’s Secret catalogue’s swim and lingerie selections.

Points to Namilia for its quick-burn giggles and creating the fashion equivalent of GIFs. One memorable look featured a halter top with cups shaped like penises and a heart-shaped, pool float of a contraption decorated with the emoji euphemisms for sex: peaches, grapefruits, bananas, etc.

Feng Chen Wang literally pumped up the volume on pieces typically associated with hiking. A parka decorated with several zippers was cinched at the waist and hit the ankle while a shiny black bubble coat seemed to be inspired by the Michelin Man on steroids. The lineup ended with a series of models wearing layered parachute pants with zipper details. It brought to mind Hood by Air.

Finally, David Ferreira closed the show with grand, structural gowns and capes covered in furry material and ruffles. Everything came in a bumblebee pantone of black and yellow. His shapes were interesting and fairly well-executed by the standard of, say, a Central Saint Martins grad with promise.

What these designers’ aspirations are is anyone’s guess. One is inclined to say that scaling to a real level would be impossible given the very niche market, but then again, the room was filled with highly excited people who looked like they would be happy to own the merch on display.