VICENZA, Italy — Propelled by a reinvigorated Christmas season, fine jewelry makers at the Vicenzaoro show predicted a sparkling year ahead for business.

Company executives cited a number of factors to support their upbeat outlook, such... 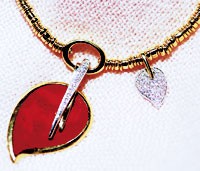 VICENZA, Italy — Propelled by a reinvigorated Christmas season, fine jewelry makers at the Vicenzaoro show predicted a sparkling year ahead for business.

Company executives cited a number of factors to support their upbeat outlook, such as the trend for more formal and one-of-a-kind jewelry that emerged during the holiday season, fashion’s fascination with girly and color-filled looks that typically helps drive jewelry sales and a push to raise creativity and innovation to new heights.

Trends included combinations of black and white with diamonds or stones such as onyx and kogolong, nature-inspired shapes like flowers and leaves, dashing colored stones, graphic shapes with an urban edge and leather or silk combined with gold and stones.

“It’s great to see such a variety of trends…feminine, street chic, edgy, ingenue, something for all,” said Lauren Kulchinsky, vice president and fine jewelry buyer at Mayfair Diamonds & Jewelry, who cited the yellow gold floral pins at Orlandini and Antonini’s diamond button earrings as standouts. “Women who have their big diamond, their diamond rivières and their string of South Sea pearls are eager for something new and fun.”

Sue Ann Newberg, vice president and divisional merchandise manager at Saks Fifth Avenue, said: “There is much more congruency between what is happening in fashion jewelry and what is happening in fine jewelry now. Color is still very strong, particularly pink, and a lot of designs had movement to them. There were also a lot of longer lengths that you can wrap around the neck or wrist.”

Newberg added that in gold jewelry, the more fashion-driven lines have gathered momentum in recent months, and Saks has done well with lines such as Marco Bicego, Gurhan and Chic ’n Shine from Roberto Coin.

“Our goal in Vicenza was to find more of these gold fashion looks — fun and not so serious,” said Newberg.

Overall, vendors and retailers praised the growing correlation between fashion and jewelry at the show.

Designer Roberto Coin is finishing a new collection called Haute Couture, that will bow at the Baselworld Watch & Jewelry Show in April.

“It’s important to keep changing and to keep searching for beauty, since jewelry is becoming more complementary to fashion,” Coin said.

The increasing competition prompted designers to further push the envelope creatively with unusual designs, combinations of materials and stones.

“We’re concentrating on the uniqueness of shapes and innovative materials to make an original product that stands out, is hard to copy and helps weather competition,” said Stefano Nicoletti, general manager at Gavello.

Nicoletti added that he expects a 30 percent sales increase this year. In 2003, Gavello started distributing to jewelry stores outside its four directly owned shops in Italy and Greece.

Other jewelry firms also stepped up their creative efforts to be a step ahead of the competition.

Calgaro, cofounded in 2000 by jeweler Giuseppe Calgaro and his companion, Monica Fin, a textile designer, best represents innovation. After five years of research, they launched a product that consists of multiple threads of gold, spun as a yarn to form crocheted, fabric-like necklaces, earrings and bracelets. At times, they are enriched with beads of turquoise, onyx, quartz and pearls.

Most executives agreed that the emerging markets in the production of jewelry — China, Turkey and Malaysia — have upped the quality level, but still lag behind when it comes to ideas and image. Many cited Russia as the new market for future growth. Fope, for example, is in talks with distributors there and the company hopes to implement its presence with 100 points of sale.

The prolonged strength of the euro against the dollar isn’t as concerning for jewelry houses as it is for luxury goods groups and fashion houses, partly because stones and gold are paid for in dollars. That said, most companies are absorbing any price increases by pruning company costs.

Federica Chimento, president of Chimento Corp., the company’s U.S. branch in Miami, noted that the weak dollar has led many Americans to buy domestically.

“The weak dollar hasn’t penalized us because Americans are traveling less, hence spending more nationally,” said Chimento, adding that the U.S. share of Chimento’s business will jump from 5 percent to 8 percent this year. Chimento sealed 2003 with overall sales of $64.1 million, translated from the euro at current exchange rates.

Chimento is celebrating its 40th anniversary with its first watch collection, which is available in a limited edition of 1,200. Available in date watch or chronograph, it features a battery-operated movement in a steel case and bracelet with titanium inserts.

Valeria Verlato, marketing manager at Fope, said U.S. clients would continue to buy Italian jewelry despite the unfavorable exchange rate because they appreciate its image and brand support.

This year, Fope is celebrating the company’s 75th anniversary with Abissi, a full-range collection made with a tubular chain in either solid gold or three-color gold mixes and with or without diamonds.

Attendance was up 1.6 percent, as 22,031 visitors shopped the weeklong fair that ended Jan. 18, while foreign attendees increased 5 percent to 9,636.