The Vicenza jewelry trade fair was a boon for brands that are proactive in research, innovative design, special workmanship and top-quality stones. 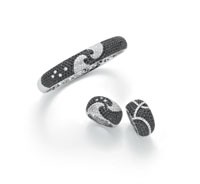 VICENZA, Italy — The Vicenza jewelry trade fair was a boon for brands that are proactive in research, innovative design, special workmanship and top-quality stones.

Those qualities enable companies to better weather on-and-off market conditions caused by unsteady exchange rates, lackluster consumer spending and higher gold prices. Most exhibitors showing at the weeklong trade fair that ended on Jan. 21 said they were upbeat about business this year.

In the first nine months of 2006, exports of Italian jewelry were essentially flat, registering a 0.4 percent increase against the same period in 2005. The most significant growth came from Poland, up 75.3 percent, followed by Russia, which rose 31.5 percent, and Hungary, with a 13.2 percent jump. China rose 10 percent, while the U.S., which continues to be the number-one export market for Italian jewelry, dipped 5 percent.

“We need to be optimistic because there’s always something that dents into business: terrorism, high gold prices, exchange rates,” said Pilar Coin, marketing manager at Roberto Coin. “But if the price and design are right, then clients come back for more.”

Evelina Hristozova, marketing manager at Calgaro, concurred: “If companies invest in research to offer the right product at the right time, the market will always be stimulated.”

In terms of trends, rose gold is the new white.

“It shouldn’t be too red, but if it’s subtle, then it’s versatile and elegant,” Valente said.

Chains of various lengths and widths are still popular, together with voluminous earrings and rings. Shapes continue to be on the romantic side, as is the palette of fruit-salad color stones, for which orange sapphires, green amethysts, kogolong, lemon quartz, moonstone, topazes and rubellites are combined liberally.

Many manufacturers cited retail expansion as a priority, especially in China and the Far East or in smaller countries such as Ukraine and Lithuania. And many jewelers are channeling money into their own stores or in-store shops.

“There’s nothing like having your own store for marketing the product range and image without filters,” said Maria Luisa Pianegonda, marketing manager at Pianegonda. “We sell a philosophy and it needs to be experienced in the best way possible.”

Last year, Pianegonda cut the ribbon at six outposts in China, Taiwan and Hong Kong, and is looking for space in Los Angeles and New York.

Valente just signed deals to open stores in Shanghai, Macau and Bei­jing, as well as in Seoul and Ukraine, all in 2007, and Fope is to launch a shop

in Shanghai by yearend.

Coin’s retail agenda includes the opening of its first stores in Dubai in May and Macau in September.

In March, Antonini will open in Fukuoka, Japan, with its new store concept — a Louis XVI table surrounded by matte steel showcases, high-tech Flos lamps and a white carpet — that was unveiled in the brand’s new Tokyo store in the fall. Antonini is also in negotiations with four independent U.S. jewelry stores to open in-store shops with the new look.

Antonini’s new collection is called Biarritz and focuses on matchstick earrings and pendants that fan out in a circle. Available in pavé diamond white or rose gold, they are matched to either a white kogolong or peach-colored moonstone.

Pianegonda worked the color element via silver or yellow gold rigid chain rings and bangles with sprinkles of emeralds, rubies and sapphires, or with pendant earrings and charms with red and ivory enamel hearts. Its trademark oversized stones set on silver were also bestsellers.

Together with Rosato and Facco, Mariella Burani Fashion Group acquired Valente in December to form a company called Gioielli d’Italia.

“We think that the synergies in terms of retail growth and new markets will be very important,” said Annamaria Barzan, marketing manager.

The acquisitions wind also blew over La Nouvelle Bague, acquired this month by Stefan Hafner Spa, which is controlled by Dubai-based Damas.

“This will allow us to boost sales, invest in marketing and raise brand awareness,” said co-owner Leopoldo Poli. “We feel comfortable with this acquisition because the new management isn’t interested in tweaking the brand’s identity.”

The house’s specialty — enamel-adorned gold pieces with diamonds — continued to be a priority for buyers. This time, Indian-inspired pendants, rings and bangles came with accents of prune and pepper red alongside black-and-white combinations.

Calgaro continued to push the envelope and refreshed a perennial classic — pearls — by using both pink and white versions threaded on multistrand burnished silver-spun necklaces. At times, the styles were completed by drop-shaped semiprecious stones and silver discs.