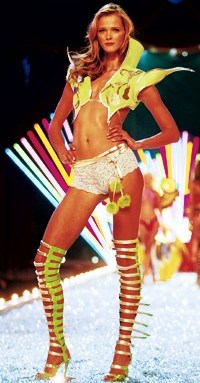 NEW YORK — The novelty of the world’s top models strutting down a catwalk in sexy lingerie in prime time hasn’t worn off after four years.

That’s because Victoria’s Secret, the $3.59 billion retail phenomenon, never ceases to push the envelope a little bit further. At a time when Britney Spears and Christina Aguilera flaunt their sexuality as pop stars, and “Sex and The City” crosses generations, Victoria’s Secret keeps ahead of the pack with a steady stream of cutting-edge lingerie in its 1,014 stores, its “Very Sexy” marketing campaigns and its annual fashion show.

This year was no exception.

Billed as the “sexiest night” on TV, “The Victoria’s Secret Fashion Show” is scheduled to air Wednesday on CBS at 10 p.m., after the kids are tucked away in bed. The live onstage affair was staged Thursday at the New York State Armory in Manhattan.

Victoria’s Secret is upping the ante for its second season on CBS. The ratings for last year’s show dropped from 12.4 million to 10.4 million after going head to head with the finale of “The Bachelor.” Those numbers were good enough for 44th place that week.

The show, which was presented as an entertainment vehicle similar to a Broadway musical with a Cabaret-style vignette, was laced with live performances by Sting, Mary J. Blige and Eve. There also was a side show of celebrity guests that included P. Diddy, Denzel Washington, Damon Dash, Chris Noth, Ahmad Rashad and Tommy Lee.

It cost $6.5 million, up from the $5 million and $6 million spent on the last two shows, respectively.

“It’s the most expensive fashion production in the world, it’s the most-watched fashion show in the world and it’s the only fashion brand that has its own network television special,” said Ed Razek, Victoria’s Secret chief creative officer. “How do you top yourself? Well, that is the job, isn’t it? The sets and the costumes have to get bigger every year. You don’t want to repeat yourself.”

But there are still only so many scantily clad combinations to send down the runway. The show exploded into national consciousness four years ago as an Internet phenomenon — the 1999 streaming-video show crashed under the weight of the traffic — and has settled into being a regular feature of the November sweeps period.

CBS declined to comment on both the price of spots and about this year’s advertisers. Last year’s mix skewed heavily toward movies and other categories not aimed specifically at the men, the result of about a 50-50 male-female split in the audience, Razek said.

“The notion that it was the 44th most-watched show of the week was negative spin,” Razek said. “The fact is, an enormous amount of 18 to 34s watch it and it draws big numbers overall. If it was an infomercial,” as some of the show’s critics have claimed, “then CBS wouldn’t broadcast it and major sponsors wouldn’t advertise on it.”

The biggest advertiser is Victoria’s Secret itself, which bought five spots last year and will air another five on Thursday. While Victoria’s Secret executives are vague about the show’s exact return on investment (chief executive officer Grace Nichols said two years ago that the 2001 broadcast boosted store sales by about $10 million), it’s still a marketing home run for the brand, even if it’s one with gradually diminishing returns.

“There’s a direct correlation [to a boost in sales] in terms of kicking off the holiday season with a major piece of momentum,” Razek said. “This is very efficiently spent marketing dollars.”

Victoria’s Secret took no chances this year and staged two fashion shows, one in the afternoon and one in the evening, to get the perfect cut for TV. Officials decided to make the extra effort, as well as additional spending for the multimillion-dollar extravaganza, following last year’s fur protest from the People for the Ethical Treatment of Animals. PETA was protesting Brazilian model Gisele Bündchen’s contract to promote Blackglama mink.

This year’s show went uninterrupted, giving lingerie voyeurs a gander at what trend direction the innerwear specialist is taking with its merchandise and marketing message. Surprisingly, unlike other Victoria’s Secret shows, which focused on overly endowed figures, this year’s rendition offered girlie looks with lots of bras and panties for the young, contemporary set.

It appeared to be a clear-cut message that Pink, a subbrand launched by Victoria’s Secret in 2002 and aimed at 15- to 22-year-olds with smaller proportions, is clicking at the chain. Pink was introduced to 15 stores, expanded to more than 50 doors last spring and is expected to be rolled out to another 150 to 200 doors in 2004.

While cleavage remained a key focus, anything that decorated the derriere was key with novelty thongs — and garters were a big idea.

This year’s show outdid all the others in terms of glitz and a media feeding frenzy. The shows began in 1996 at the Plaza Hotel, moved to Wall Street in 1998, the Cannes Film Festival in 2000, Bryant Park in 2001 and the New York State Armory in 2002.