The show will bow March 14 and will showcase more of the designer’s early work. 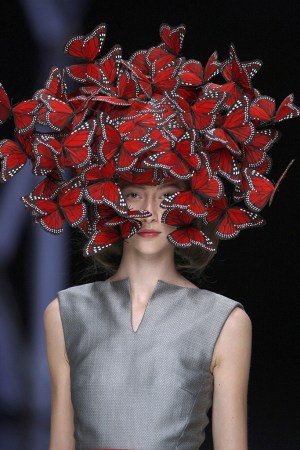 LONDON — When “Alexander McQueen: Savage Beauty” opens at London’s Victoria & Albert Museum on March 14, following its sellout run at New York’s Metropolitan Museum of Art in 2011, it will be an “edited and expanded” show, the V&A said Thursday. The London exhibition will showcase 30 additional garments and a new section that looks at the late Lee Alexander McQueen’s early, often controversial shows that he put on in Nineties London. Such is the anticipation for the show that 16,000 people have already bought tickets ahead of its March opening, according to the museum.

Claire Wilcox, senior curator of fashion at the V&A, said at a preview of the exhibition Thursday that the London section “situates McQueen in his home city.” “The early days were full of raw energy and creativity but no cash, and McQueen was thought pretty hard-edged,” said Wilcox, who noted that stylist Katy England, McQueen’s long-time collaborator, advised on the section, which will include pieces from the designer’s notorious “Highland Rape” fall 1995 collection. But pointing to McQueen’s Savile Row training, Wilcox added that while “his style may have been subversive…it was entirely underpinned by exceptional skill.”

This story first appeared in the October 10, 2014 issue of WWD. Subscribe Today.

Speaking after the preview, Alexander McQueen’s creative director Sarah Burton said the London section will showcase “in a way, more raw-er pieces — when there was no production and [McQueen] was making a lot of the pieces himself,” she said. But even early in McQueen’s career, Burton said his design signatures are evident. “When you look at Lee’s graduate portfolio…in those sketches there was so much information that he used again and again and re-worked,” she said. “It’s maybe a different period, but it’s not a different hand. That’s what’s interesting, it was all there at the very beginning.”

Another aspect of the exhibition that has been significantly expanded for London is the show’s Cabinet of Curiosities, which will display designs that McQueen created together with jeweler Shaun Leane and milliner Philip Treacy. The pieces will be shown alongside film footage of McQueen’s dramatic runway shows.

Martin Roth, director of the V&A, called the exhibition’s arrival in London a “homecoming.” “We know that studying at Central Saint Martins, [McQueen] spent many, many hours here at the V&A, in the gallery and in the archives,” said Roth.

Jonathan Akeroyd, chief executive officer of Alexander McQueen, said that the house views its archive as particularly important as for McQueen it was “a working archive.” “[McQueen] would often use pieces from the archive, cut them up and use them for research for new collections [and] would often give pieces away to his closest friends,” said Akeroyd, who noted the significance of bringing the exhibition to London. “With London being Lee McQueen’s birthplace, as well as where all his incredible work was created, the [exhibition] will be a true celebration of his genius and influence,” he said.

Wilcox is the London exhibition’s curator, while Andrew Bolton, curator of the Costume Institute at the Metropolitan Museum of Art — who curated the original exhibition — is consultant curator. Sam Gainsbury, the show’s creative director and Joseph Bennett, its production designer, will both re-design the exhibition for the V&A, together with consultant producer Anna Whiting. All three worked together on the original New York exhibition.

The London exhibition, which will run from March 14 through July 19, is in partnership with Swarovski and supported by American Express, along with further support from MAC Cosmetics and the co-operation of Alexander McQueen.  And to coincide with the V&A’s exhibition, London’s Tate Britain will show photographer Nick Waplington’s images documenting McQueen’s working process in creating his “Horn of Plenty” fall 2009 collection, an exhibition that will run from March 10 through May 17.