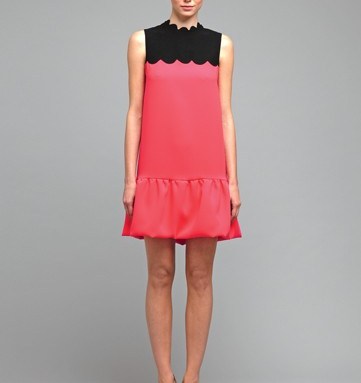 As anyone with a passing interest in the tabloid side of celebrity knows, Victoria Beckham is about to have a baby. Though prior to gender confirmation she was loath to admit it, this mother of three gorgeous boys was, understandably, rooting for a girl this time. Now, the baby’s sex long confirmed, Beckham floats the notion that her daughter has already influenced her work, hormonally speaking.

The designer muses about a possible impact of the pregnancy on Victoria by Victoria Beckham, her new don’t-call-it-a-secondary-dress-collection due for fashion delivery for spring 2012. The two projects have been in the works for about the same time, give or take. Beckham recalls that early on when she informed her staff of her baby news after first being told she was having a boy, “One of my team said, ‘It would be funny if you found out you were having a girl.’ Because this is the most girly collection I’ve ever created.”

The girliest, youngest and, set to retail primarily in the $550 and $900 range, most accessible. Beckham characterizes the new dress line as representing her “other side,” the alter ego to her more glam self as manifested in the Victoria Beckham line, now in its sixth season. Her de facto chief executive officer, the charmingly untitled Zach Duane, refers to the launch in more concrete terms. “We had to do something,” he says, “or we’d be a niche brand forever.”

Inspired by the cartoon character Emily the Strange, an edgy adolescent often followed by four cats who dresses on that line where cute meets chic (and who has her very own brand), this collection centers on a loosened silhouette. “These are the kind of dresses I’ve been searching for,” notes Beckham, who admits to being her own archetypal customer. If she won’t wear it, it doesn’t make the line. “The perfect little summer dress, something that was fun, something that was girly, something that was easy to wear, something that would take you from day through the night.”

The girlishness and whimsy come through in the clean, vaguely Sixties shapes; vibrant colors and design details, such as scalloped edges and pleating; they should show up as well in a series of not-ready-to-shoot conversational prints. These include clouds, moons and, in the spirit of Emily, two of the kitty variety, one “Victoria Cat” and the other, “Cutey Cat.”

“Where I am currently, I like a more modern attitude,” Beckham explains. (In her main line, as well, she has in recent seasons introduced alternatives to her signature hyper-curvy shapes.) “Also, it means that I’m opening these designs to women and girls of all different shapes and sizes, people who maybe want something less tight and clingy and structured.