By Marcy Medina and Kari Hamanaka on February 5, 2017
View Slideshow 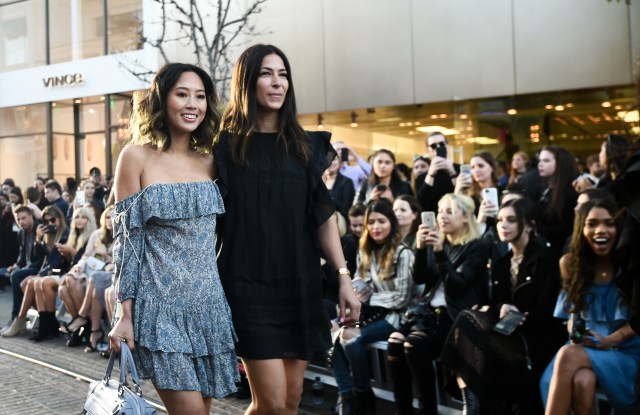 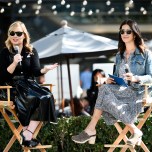 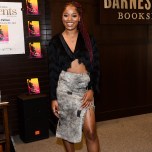 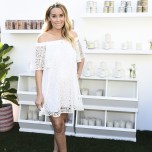 Sunshine, starlets, social media influencers, sales. All are key to what Los Angeles has to offer as an alternative fashion show locale.

Rebecca Minkoff took full advantage of these elements for her first L.A. (and third overall) see-now-buy-now fashion show on Saturday, racheting up the experiential consumer element by choosing to show at what is arguably the city’s most visible and buzzworthy retail center, The Grove.

While the runway show itself had similarities to the fall 2016 event she mounted in the middle of Manhattan’s Greene Street last September — 500 seated guests lining a public, cobblestone street while hundreds more looked on as social media influencers and models walked in new current-season outfits that were shoppable immediately afterward — the L.A. show was actually the finale to an entire day’s worth of events, from an outdoor yoga class to meet-and-greets with other celebrities, all of which were open to the public.

“This is by far our largest show we’ve ever done in terms of who we are expecting,” Minkoff said before the show. “We have 500 seats, but we’ve invited the entire world, basically. We have nine influencers walking the show, and they have invited all of their fans, so I expect this place to be mobbed.”

Indeed, The Grove on any sunny Saturday is always a bustling place, with a tenant mix that attracts shoppers, diners and moviegoers, and a Disneyland-like ambience from the dancing fountain, lush green lawn and trolley that runs up and down the car-free cobblestone lane. The 500 seated guests included members of the West Coast press and celebrities such as Erika Christensen, Camila Alves McConaughey, Laura Marano, Angela Sarafyan, Jessica Szohr, Emmanuelle Chriqui, Cameron Richardson, Katie Cassidy, Taissa Farmiga and AnnaLynne McCord, whose presence helped draw the 1,000 more standing room looky-loos, not to mention those who looked down from the second floors of Barnes & Noble, Cheesecake Factory, Tommy Bahama, J. Crew and the other stores lining the brick road.

Minkoff seemed calm amid the backstage fray. “I think now we have gotten it down to a great system. We know what the buyers have bought. We know what the press has pulled and liked because we still do our appointments on the old timeline. So we can go into this week being smart about all the purchasing. We send the looks to all our retailers, and everyone has the most amount of information that allows them to mimic it in store, market it differently, to have it on their homepages. Leading up to the show, we know which influencer moves the most product, versus someone who just has a lot of followers. The show is the true culmination of a year versus the beginning of a cycle.”

Blogger Elaine Daneshrad, clad in a Rebecca Minkoff dress, had been at The Grove earlier in the day for the pop-ups and then later watched the show. “I go to New York Fashion Week a bunch and so I love that they’re doing creative and different things in L.A. and Rebecca Minkoff has become a trendsetter because she did a show in New York that was in the streets with influencers. So I feel like she’s really getting ahead of the game,” Daneshrad said.

While many watching were fans of the designer, some came as followers of myriad other influencers and celebrities on hand for the event. Those who walked the show included Coco Rocha, Jamie Chung, Aimee Song, Victoria and Maddy Justice, Natalie Suarez, Chriselle Lim and Pyper America Smith, who have a collective Instagram following of no less than 25 million.

Priscilla To, a Los Angeles area college student, came to The Grove with her two friends specifically to see Victoria Justice walk the runway. “I’m not going to lie — I didn’t care about [seeing] Rebecca at all but now I would maybe buy,” said To, who was enamored with Minkoff’s mix-and-match pieces and sandals that were sent down the runway.

Uri Minkoff discussed the company’s disruptor mentality as also a means of survival amid the ever-shifting retail landscape. “From a business perspective, it’s been a whole thing of, ‘Are malls dying? Is retail dead?’ So we thought, what if we could go to the most amazing experiential mall in the country and have an event that’s the crescendo of the day’s experience of other brands aligning and each person bringing their own guests where you pack the mall with an experiential day that ends in a fashion show with a see-buy-wear mentality. Can you rebirth retail in some way? That was the larger idea.”

The day began at 10:15 a.m. with a Nordstrom and Zella activewear-sponsored yoga class on the lawn, then Essie was on hand for manicures like the ones models sported in the runway show, while Glamsquad provided hair and makeup touch-ups. That was followed by an early afternoon Q&A with Rebecca Minkoff and Clique Media Group cofounder Hillary Kerr, in which they discussed why
all-day events such as Saturday’s can help keep shopping centers relevant.

Pre-show yoga at The Grove.  Buckner/WWD/REX/Shutterstock

“That’s what Millennials are interested in and Gen Z,” Kerr said. “They want that IRL experience and [Rebecca’s] making this an event that you really have to go and see and be a part of and participate in. With all the FOMO of social media now, too, it really inspires people to show up and turn up because they want to participate in that moment.”

Lauren Conrad and Keke Palmer each generated their own buzz later in the day. For Conrad, it was a small pop-up on the lawn selling wares from The Little Market, her three-year-old home and accessories company that sources fair-trade merchandise from 16 countries worldwide.

“Rebecca invited us to be a part of today. I read about this event a ways back, and I think it’s such a cool inventive way to show the show-now-shop-now model,” she said. “I think a lot of people are here for Rebecca, but any opportunity to get a new customers’ eyes on our company is really amazing. We’ve been meeting a lot of people who aren’t super familiar with the brand, which is one of the reasons we do an event like this.”

While Conrad said most of her fans — like Becky Donoso and Anne Gibbs, who learned about the event through her social media posts — turned out for a photo op with her rather than shopping, she was still happy to be able to show off new categories like totes and clutches.

Palmer, meanwhile, generated a crowd of more than 100 seated and standing guests to hear her field questions about her career and debut book “I Don’t Belong to You: Quiet the Noise and Find Your Voice” on the third floor of Barnes & Noble.

Specific statistics on sales and traffic for the day were not immediately available, so the jury’s still out on whether retailers at the center overall enjoyed a sizable jump in performance for the day.

But The Grove owner Rick Caruso was beaming post-show. “It was a great show. I love the fact that L.A. out-positioned New York for Rebecca’s show. And the crowds are fantastic. I think sales are going to be off the charts today and tomorrow, and over the week.”

As for the ROI on the marketing dollars spent mounting the events, he said, “To me the return is unlimited. It’s just the best investment we can make. It draws a great customer to the property and with just the influencers, the tens of millions of impressions we are going to have today, tonight and tomorrow are priceless.”

He added, “Now the fashion show’s done and people are walking around, they can go shop and hang out and eat and that’s what it should be. It just broadens the whole event instead of just having a fashion show and then it’s over with.”

But Minkoff’s day didn’t end with her runway bow. The designer and her model influencers returned to the lawn for a meet-and-greet with fans, which she worked for an hour until it was dark and chilly outside.

She then went inside the adjacent Nordstrom for another, two-hour, meet-and-greet, this one reserved for customers who had purchased items at the store or in the pop-up. Nordstrom’s Minkoff spring 2017 merchandise was moved from its normal second-floor home to the center of the bustling first-floor accessories department. About 35 women were waiting in line, sipping wine and mineral water, by the time the designer arrived. Some also had their purchases monogrammed by an on-site artist.

Stylist assistant Tori Melendez had caught sight of an in-store sign advertising the event while she was making a Nordstrom’s return for her boss a few days ago. “I thought, ‘I have to come to this,’ because I adore her. Getting to meet her will make my whole night.” Earlier, Melendez had purchased a pink quilted cross-body bag in the pop-up store.

Minkoff nailed it on the virtual see-now-buy-now with a hard to miss landing page on her web site for all 40 looks, of which almost all were immediately available for purchase (only a few pieces were on pre-order and not shipping until as late as March 30). Sizing was ample and in keeping with Minkoff’s full embrace of social media, images of the looks could be easily shared across social media platforms, from Facebook and Pinterest to Tumblr and Weibo. Models and influencers also shared their runway looks through Like to Know It, which sends purchase information to a user once they’ve liked a picture.

Select pieces — such as the drop waist, pebble print minidress and California Sunset Sweatshirts — were also available on the Nordstrom web site. However, the spring merchandise was sprinkled in with the old and, without the full looks pictured, didn’t seem as inspired as shopping on Minkoff’s site.

As Uri Minkoff carefully observed each element of the day, he offered his thoughts on creating a larger movement. “If this show is the peak of it in Los Angeles, how do you get a local community and retailers and restaurants to align together to create experiential days on a property to get a consumer motivated? And what if that started to happen more regularly? Would that spur something? We started the see-buy-wear last February and now you are seeing other brands doing it, so how do you set a template for others to follow? Rebecca and I want to be that brand.”

While Rebecca Minkoff will be back in New York come September, he said, “I’m not saying we are always going to play with a warm weather place in February, but it’s an interesting idea. We are always looking to see what is that next thing.”