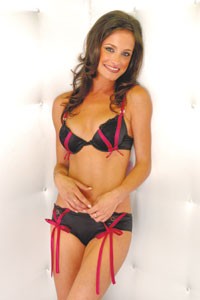 New Lines from Down Under
SYDNEY — Victoria’s Secret has a new Australian secret.

After being the exclusive U.S. outlet for high end, Sydney-based intimate apparel label Pleasure State the past three seasons, Victoria’s Secret has struck a deal with the company to design and produce two diffusion lines.

The first, a cobranded line called Pleasure State for Victoria’s Secret, is to bow in 50 Victoria’s Secret stores for the holiday season, the first phase of a planned 200-store rollout over the next two years.

The 25-piece collection of nylon, Lycra spandex and jacquard lace has a plethora of detailed crystal and ribbon trims, and is priced from $38 for a thong to $98 for a camisole. Bras retail at about $78. Pleasure State’s premium line, which is being sold in Victoria’s Secret’s top 30 doors this season, ranges from $50 for a pair of silk knickers with Swarovski crystal buckles, to $115 for a silk contour bra with Leavers lace trim and $250 for a fully-boned silk corset.

Also hitting the sales floor for holiday selling is Glitter Lace, the first private label line designed and produced by Pleasure State for Victoria’s Secret. With deliveries slated every six weeks, Pleasure State will be distributed to more than 800 stores, said Kay Cohen, founder, designer and co-director of the line.

The expanded program with Victoria’s Secret is the latest coup for the Sydney lingerie start-up, which has experienced strong growth since launching at Mercedes Australian Fashion Week in May 2004. For fiscal 2006 — in effect Pleasure State’s first full year of trading — the company’s wholesale turnover will exceed $10 million, said co-director Justin Davis-Rice.

Cohen was a fashion designer in her native New Zealand before spending the next 20 years working for some of Australia’s and New Zealand’s biggest intimate apparel manufacturers, including Triumph, The Berlei Group and Bendon. As Bendon’s group general manager, Cohen spearheaded the development of its Elle Macpherson Intimates line.

With Pleasure State, Cohen said she wanted to launch a lingerie range that offered fit and fashion. She introduced her first collection of silk contour bras, boy-leg knickers, and corsets with unconventionally wide straps and contrast ribbon banding at a Fashion Week runway show, Australia’s most high-profile fashion event, and was discovered by a Victoria’s Secret scout who was in town for the week.

“At the time, I didn’t know that Victoria’s Secret was bringing in other brands, like Chantal Thomass and Spoylt,” Cohen said. “We were just lucky. We got in at the ground level and it’s worked for us.”
— Patty Huntington

A Splash from Paris
PARIS — After skipping a season, upscale French lingerie brand Vannina Vesperini is planning a fall 2006 collection to be presented in Paris in January, as well as a new holiday line dubbed Mon Amour by Vannina V.

The line is being launched for holiday 2006 selling at 300 Victoria’s Secret doors in the U.S., said Vesperini.

The line, split into three themes — Precious, Senzo and Secret — will feature girly looks and femme fatale styles that will retail at a suggested $58 for a bra to $178 for a silk cocktail dress with a lace capelet.

“Today, big distributors have taken on such a force, but compared to luxury brands, they’ve lost their way when it comes to having an identity,” said Vesperini, who compared the deal with H&M taking on designers such as Karl Lagerfeld or Stella McCartney.

She added that the holiday line, which features crystal studs and ribbon embellishments, also marks her first foray into men’s wear with silk boxer shorts.

“The line is destined for couples, with a spirit of tenderness and gift giving,” she said.
— Katya Foreman

Teaming Up with Intimissimi
MILAN — Victoria’s Secret has partnered with Italian innerwear and hosiery company Calzedonia to introduce the Intimissimi label in the U.S.

Under the agreement, Intimissimi brand boutiques will open within Victoria’s Secret stores and the chain will help develop a line of beauty products and body creams under the Intimissimi label.

The first Intimissimi store opened at the end of October at Easton Town Center in Columbus, Ohio, and 26 freestanding units have opened since then.

For 2006, Victoria’s Secret will open 135 additional in-store Intimissimi shops, followed by another 20 by the summer of 2007. Fragrances and body products under the Intimissimi brand will be available next year. The brand currently lists a network of 135 company-owned stores and 610 franchised units.

Intimissimi was launched in 1996 and is known in Italy for its quality products at affordable prices and its young image. Parent company Calzedonia, based outside Verona, registered sales of about $478.6 million last year. Consultant Pambianco Strategie d’Impresa ranked Calzedonia in the top spot out of a sample of 42 Italian companies in the same category. Calzedonia did not provide a breakdown for Intimissimi, nor sales projections for the U.S.

Intimissimi caters to target customers ranging in age from 15 to 50 and offers a more fashion-oriented product.

“We are very pleased with the expansion of Intimissimi in the U.S.,” Leslie H. Wexner, president and chief executive officer of Victoria’s Secret parent Limited Brands, said in a statement. “Intimissimi complements our collections and is perfectly in line with Victoria’s Secret’s image of seduction and charm.”

Sandro Veronesi, chairman of Intimissimi, said in a statement that he was “entirely sure” the agreement “will allow both companies to develop an unlimited potential in the American market.”

Intimissimi’s store concept will be replicated in the U.S.: a minimal and clean design, large and luminous spaces in a delicate white and cream color palette.
— Luisa Zargani