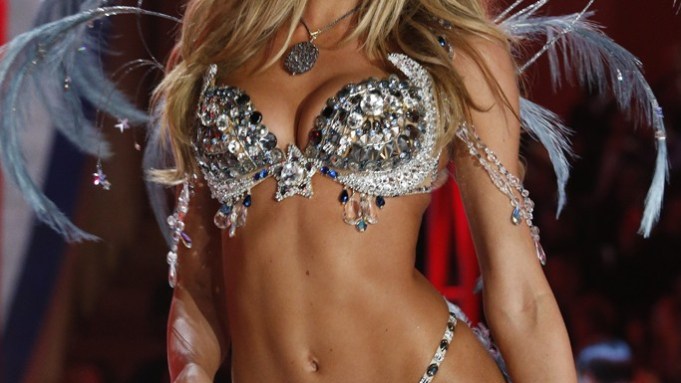 Victoria’s Secret staged one of its best fashion shows in recent years Wednesday at the 69th Regiment Armory in Manhattan. This year’s multimillion-dollar talent headlining the show hit the trifecta, especially with Rihanna who — dressed in a long black gown with a high-cut slit that exposed sexy black garters and stockings — shimmied her hips and thighs in come-hither fashion in the Dangerous Liaisons segment as she sang her single, “Diamonds.” The singer later performed “Phresh Out the Runway,’’a sultry number for which she wore a see-through pink chemise with a burn-out floral pattern, wrapped with a knit activewear top around her hips. For the Angels in Bloom venue, Rihanna also wore what appeared to be a soft, custom-made sports bra underneath the peekaboo silhouette and pale pink suede ankle boots. At the preshow fitting earlier this week at the Victoria’s Secret offices in New York, a designer told WWD that Rihanna would be wearing her personal wardrobe while performing at the show.

Meanwhile, Bieber, decked out in a white zip-front plastic vest, shimmery silver tank and white zouave pants, struck a chord with young girls — and grown women — in the audience with his “As Long as You Love Me” ballad. This was followed by one of his frenetic routines as he danced in sync with about a dozen dancers, singing “Beauty and the Beat,” as Angels pranced by in the collegiate Pink Is Me segment.

Like Rihanna and Mars, Bieber also sang at the afternoon show, where it was apparent a few kinks needed to be worked out before the evening session. A cushion prop in the Pink segment almost toppled as Bieber was mounting it, and a gymnast in the Circus opener — which featured acrobats and Cirque du Soleil-inspired aerialists and oversize scorpions and spiders on stilts — cut his head while performing with a large metal ring.

Mars took the audience to a nostalgic level with his rendition of “Locked Out of Heaven” during the most elaborate show segment, Silver Screen Angels. Swathed in a crush of Swarovski Elements, retro-looking costumes had the glamour of Old Hollywood and echoed the drama and romance of screen sirens such as Jean Harlow, Greta Garbo and Marlene Dietrich.