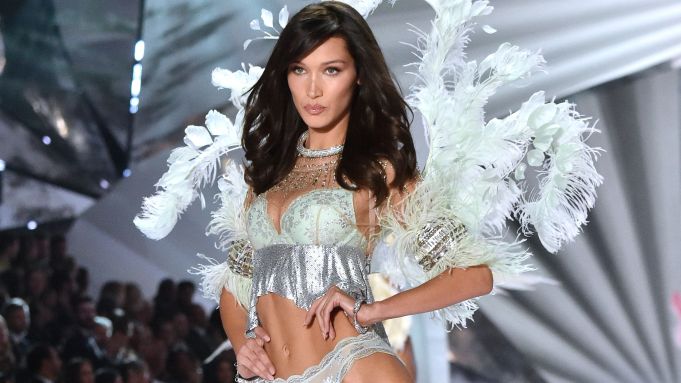 “The Victoria’s Secret Fashion Show is unlike any other in the world,” an emcee said over the microphone just before the show was about to begin. The brand made their return to New York after two years abroad for its annual runway spectacle — which it declared the “Super Bowl for supermodels” — with two tapings held at Pier 94, which will be televised on ABC on Dec. 2 at 10 p.m. EST.

Leading into the show, many wondered how — or if — the VS show would adapt in a post-#MeToo, post-Kavanaugh, post-midterm election climate. The brand seems content with doubling down on its usual branding of sexiness, which might have struck a chord in years past but was tinged with a dated quality come Thursday.

The show did offer moments of conversation, particularly at the beginning. Prior to the first set of looks, a video montage was shown of various models speaking on the topic of womanhood and girl power. “It’s difficult being a woman, and other women understand that,” one said, while another voiced “It’s fun to be a woman and I think we should own that.”

Categories for this year’s show included: Glam Royale, Golden Angel, Flights of Fancy, Team Pink, Floral Fantasy, Downtown Angel and Celestial Angel. Taylor Hill opened the show to the live performance of Keala Settle’s hit from “The Greatest Showman,” “This Is Me” in a punky tartan-plaid teeny mini-skirt with feathered, bright red wings and matching bra to introduce the Glam Royale section. Models such as Gigi Hadid, Kendall Jenner and Cindy Bruna took their first walk of the night clad in tartan capes, feathered wings, and plenty of lacy lingerie in knee-high lace-up pumps. Candice Swanepoel then opened the Golden Angel section, which included plenty of pretty brocade bustiers, corsets and floral wings, as The Chainsmokers and Kelsea Ballerini performed alongside.

See Every Look from the Victoria’s Secret Fashion Show

There was an homage to Adriana Lima, the brand’s longest-running Angel, who took the runway for a solo walk to celebrate hanging up her wings after 19 years followed by a performance by Halsey during the Flights of Fancy section. Models such as Bella Hadid, Winnie Harlow and Devon Windsor emerged clad in feathered wings and shoes and embellished bodysuits over shimmering lingerie; Elsa Hosk closed the section in the Atelier Swarovski-designed $1 million Fantasy Bra.

Outside of fanciful lingerie and theatrical wings — from feathered to crystal-encrusted — the “fashion” at this year’s Victoria’s Secret Fashion Show was more attainable. The brand’s collaboration with designer Mary Katrantzou, presented during the “Floral Fantasy” section, included brightly colored floral- and stripe-printed leggings and cropped tops, tulle dresses over bodysuits, high-waist briefs and bras as well parachute pants. Katrantzou added her playful touch with larger-than-life parachutes in place of wings. The “Team Pink” section proved another fully flushed, commercially friendly and more covered-up section than before with silver lamé athletic shorts and jackets, cropped hoodies and sweatpants and sporty intimates covered in the Pink logo.

Related: Mary Katrantzou on Her Unlikely Collaboration With Victoria’s Secret

Rita Ora then took the stage as the Downtown Angels — Stella Maxwell, Barbara Palvin, Josephine Skriver and Martha Hunt, to name a few — strutted out in black and white strappy lingerie styled with cropped puffer jackets, athletic shorts and bodysuits, “Angel” graphic T-shirts and even a black puffed “wing” with “Victoria’s Secret” spray-painted red on the front and back (the appeal was a bit sinister and riot-y). But the Victoria’s Secret show was not about to end on anything other than a peppy note. The show finished out with the Celestial Angel section — featuring Romee Strijd in Swarovski’s look for the season — where top Angels and models took the runway in signature sparkling lingerie and thigh-high boots, complete with 3-D celestial moon and star wings (to the tunes of The Struts) before all of the 44 models of the show took the stage for their final, cheery bow.

For a production that claims predominantly women as its televised viewers, the live audience on Thursday was male-heavy. There were a handful of appearances from designers — Alexander Wang was in attendance, as were Mr. Valentino, Prabal Gurung, and Mary Katrantzou — but the audience felt far from a typical fashion show’s and more akin to an after-work downtown bar beloved by the bro-y finance set. The front row, too, was largely male: Future, who killed time pre-show by alternating between the two phones in hand, and watched expressionless from behind aviators throughout; The Weeknd, Diplo, Trevor Noah, Wiz Khalifa, Dylan Sprouse, Luka Sabbat, Zedd and Miles Richie.

Laverne Cox, one of the few women in the VIP front row section, was in good spirits ahead of her first VS show. “It seemed like a lot of fun — it’s quite a spectacle always, it’s a melding of music and fashion, with the most beautiful women in the world. This job changes careers; it’s interesting thinking about people’s dreams coming true, and that is a reality for a lot of the models walking tonight — which I think is kind of awesome.”

“They e-mailed me and were like do you want to come and I was like ‘of course,’” said Sabbat as to how he found himself at the VS show. “Because a bunch of my friends are walking the show. It’s the squad, it’s the gang. It’s a big moment for these girls, it’s a big stepping stone for a lot of these girls’ careers. I don’t know anything about this part of fashion; I know about women’s fashion, but then there’s lingerie, which is like a particularly different tier. I’m not tapped in — I don’t wear lingerie.” Never say never though: “Who’s to say what the future holds?”

When asked about the lawsuit surrounding his failure to promote Snap’s Spectacle glasses, he seemed genuinely confused. “What? I don’t know what that is,” he said.

There were moments of cuteness throughout the show, mostly when the women’s cheering squad lit up when they walked. Adam Levine leapt to his feet for wife Behati Prinsloo’s two walks; The Weeknd sat with Bella Hadid’s mom Yolanda and clapped for his girlfriend as she came down the runway; Dylan Sprouse, in an all-white suit, stood with his hand over his heart as girlfriend Barbara Palvin walked the runway, in a strange (but sweet?) pseudo pledge of allegiance. Wiz Khalifa stood and showed love for girlfriend Winnie Harlow, who made history as the first model with vitiligo to be cast in the show.

Cut to the after party and it was a different vibe. The models, having changed into cocktail dresses, posed on the pink carpet and walked through the crowd en route to a VS photo station; men in suits and slicked hair stopped them for selfies, gave them high fives and took videos on their phones as the women were escorted through.

Word throughout the fashion community was that several usual attendees had opted to sit this year out, in favor of other events happening in New York that night. What the VS show will look like in 2019, then, remains to be seen.