The runway show on Wednesday evening was infused with a renewed energy that combined the synergies of music, fashion and sex appeal. 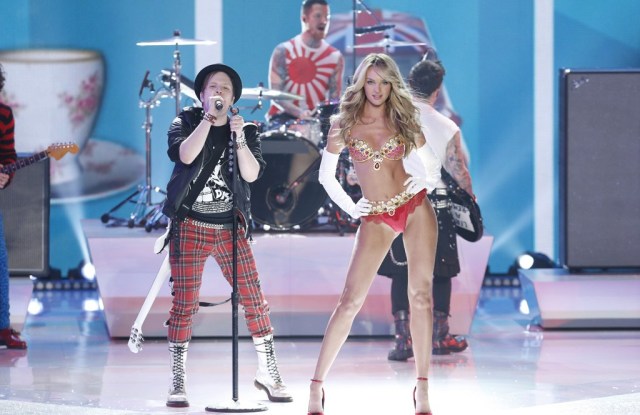 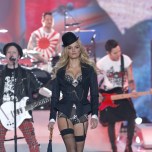 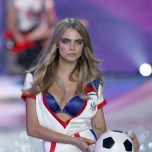 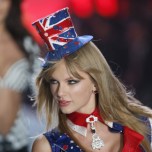 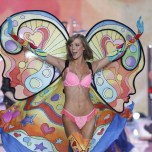 The much-anticipated Victoria’s Secret Fashion Show on Wednesday evening was infused with a renewed energy that combined the synergies of music, fashion, pop culture and yes — sex appeal.

All things British underscored the opening segment that included Angels ranging from Candice Swanepoel parading as the “crown jewels” to Behati Prinsloo decked out as a Queen’s guard. Entertainment diva Taylor Swift, swathed in the Union Jack, sang a riveting duet with Fall Out Boy titled “My Songs Know What You Did in the Dark.”

The Snow Queen finale culminated with thousands of faux snow flakes released from the ceiling of the great hall of the 69th Regiment Armory that literally turned the show into a winter landscape.

Earlier Wednesday afternoon, Swift belted out a preview of the presentation, which included the show’s finale, titled “I Knew You Were Trouble.”

At the same time, the global media was ensconced backstage where 40 Victoria’s Secret models — including some 10 Angels such as Adriana Lima, Lily Aldridge, Alessandra Ambrosio, Karlie Kloss, Doutzen Kroes and Swanepoel — blew kisses at photographers as they primped in Victoria’s Secret signature pink satin robes during hair and makeup rotations.

Razek described it as a serendipitous twist of fate that led Victoria’s Secret to Swift, who will headline the show’s entertainment with A Great Big World and British group Neon Jungle.

“I was having dinner with Lily Aldridge and told her it would be great if Taylor Swift would do the show. Lily said, ‘We both live in Nashville and we’re friends.’ I was incredulous, like you are friends with Taylor Swift? That’s like something imaginary, like you’re friends with Harvey the Rabbit. Lily sent her a note, and Taylor Swift said she would love to do the Victoria’s Secret show,” said Razek.

Meanwhile, more than a dozen fresh, new faces — and figures — will grace this year’s catwalk for the first time. But Razek said Angels such as Lima will continue to lead the glamour and excitement on the VS runway.

“Some of these Angels have walked nine, 10 or 12 shows, and to be able to do that you have to be in top physical condition.…Angels like Adriana train throughout the year, just as any world-class athlete would. The Summer Olympics has 10,500 athletes, the NFL has 1,760, MLB has 600 and the NBA has 400. Victoria’s Secret, which is the hardest show in the world to get booked for, has 40 word-class models who are also athletes,” stated Razek.

The vetting process to be a Victoria’s Secret model — and hopefully earn Angel wings — is “extremely tough.

“It’s not an easy task.…John Pfeiffer [bookings and casting director for VS] attends fashion shows worldwide, and whittles it down to the top 100 models in two days, and maybe, just maybe, a dozen girls might make it to a show. It’s not an easy show or an easy walk,” explained Razek.

Regarding the angelic look of this year’s models, lead hair stylist Orlando Pita described it as “tussled, but also very glossy.”

“A bed head is a little matte and less shiny. I have to keep it underdone, silky and in pieces, but not overworked,” commented Pita, as he brushed Kloss’ tresses. “It has to look shiny and beautiful.”

“It’s all about looking healthy and sexy. I add a very sheer, dusty red lipstick to the cheeks, nose and lips. The girls are walking around in bras and knickers — they have to look healthy and sexy,” quipped Dick Page, lead makeup artist.

RELATED STORY: Crushing on Angels at the Victoria’s Secret After Party >>