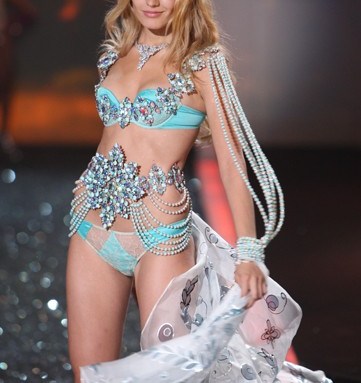 The sour economy was sweetened briefly on Thursday when the Victoria’s Secret Fashion Show returned to New York after a four-year hiatus.

CLICK TO SEE ALL FULL-SIZED IMAGES FROM THE RUNWAY SHOW>>

The $5.6 billion specialty retailer served up all of the hoopla it could muster at the 69th Regiment Armory, where 35 models, including host Heidi Klum and five Victoria’s Secret Angels — Alessandra Ambrosio, Doutzen Kroes, Marisa Miller, Miranda Kerr and Behati Prinsloo — showed off sexy little nothings for holiday gift giving.

Miller wore the star piece that will be sold in the Victoria’s Secret catalogue for Christmas: a $3 million Harlequin Fantasy Bra designed by Damiani featuring more than 2,300 brilliant-cut white, champagne and cognac-colored diamonds totaling nearly 150 carats.

The-over-the-top opulence of the event, which had an estimated budget in excess of $10 million, featured two shows, each staged before an audience of 1,034 guests with runway performances by the Black Eyed Peas. The event will be shown on Dec. 1 at 10 p.m. on CBS. Also included on the catwalk were the two finalists of the Victoria’s Secret Model Search, Kylie Bisutti and Jamie Lee Darley, who won out against several thousand competitors in an online poll on vsallaccess.com. The voting will continue throughout the airing of the TV show until about 75 percent has aired, and the winning contestant will be slid into the footage, said a spokeswoman.

This being Victoria’s Secret, nothing about the event was understated. The runway show featured five vignettes — Star Trooper, All Aboard, Pink Planet, Enchanted Forest and Romantic Journey — replete with a laser light show with fluttering butterflies, a train, dancers, balloons, feather wings, Calder-inspired plastic accessories, floating fake birds — and a choir. A recurring trend for Christmas was anything that had shine, from sequins and ciré affects to Swarovski crystals in a rainbow of colors.

Several celebrities were spotted among the turnout, including Russell Simmons, Richard Bramson and Harvey Weinstein, and stylist Patricia Fields.

Asked when he thinks a woman is at her sexiest, Simmons replied, “In lingerie. Lingerie’s a good choice.” But he added, “My girlfriend is a Sports Illustrated girl. She wears just boxer shorts.”

“It’s less nerve-racking because of the way Victoria’s Secret does it,” said Klum, who only made one brief appearance on the runway because she did, after all, have her fourth child just five weeks ago. “When I do my top model show, it’s outside in front of thousands of people so it’s more nerve-racking. But when I kind of do the [VS] wraparounds backstage and have a Teleprompter, and if I mess it up, I can do it again and again and again. Then I’m not that nervous.”

Discussing the show’s history, Sharen Jester Turney, president and chief executive officer of Victoria’s Secret, said, “First of all, we take a long time to plan it, and I think we’re the first ones in the lingerie arena to actually do a fashion show. When it started back in 1995, it was in a very small venue, and this is one of the first fashion shows to be broadcast on national television, as well as worldwide.”

Regarding the outlook for the holiday season, Turney said, “I think the show will lift people’s spirits, as well as business, especially with all of the people who watch the show on TV and the international reach [90 countries] that Victoria’s Secret has. We are prepared and have taken a lot of incentives. I believe we’ll have a good holiday.”