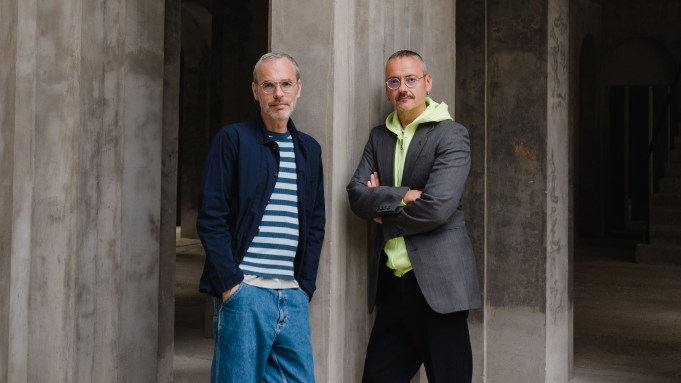 BARCELONA, Spain — “Barcelona is like the Paris of bridalwear.” So said Viktor Horsting of Viktor & Rolf ahead of the brand’s runway show parading the spring 2023 Mariage collection on Wednesday night here.

The Dutch duo was invited as special guest of Barcelona Bridal Fashion Week, running through April 24 and combining a host of runway shows and a trade fair. “We were invited already for 2020 and we’re very happy that today it’s possible to have this presentation,” said Rolf Snoeren, noting that the show would mark a one-off showcase of their bridalwear collection.

The show included a selection of archival wedding gowns, highlighting the line’s blueprint over the years. The Mariage collection was officially introduced in 2017, two years after the duo halted ready-to-wear, but their love affair with the category commenced even earlier.

“Even before, we would always include wedding gowns, two or three, in our ready-to-wear collections because it’s an iconic part of the fashion show, traditionally,” Snoeren explained. “We’re drawn to wedding dresses for their symbolic meaning, it’s an iconic moment in someone’s life. There are few garments that have such a strong meaning for people, so to design [clothing] for the most important day, hopefully once in a lifetime, it’s quite significant,” he added.

Horsting cited the custom wedding dress created in 2004 for Princess Mabel van Oranje of the Netherlands — an eccentric, bow-festooned gown that caused a sensation — as an epiphany.

Although the duo won’t share sales figures for bridalwear, they acknowledged that the category is performing well and has also triggered their creativity in unexpected ways.

“It’s funny because we design couture twice a year, but sometimes it can be a struggle because we can do anything, and you always want to have an idea, to be new and original, all of that. The great thing about wedding dresses is that there are a lot of restrictions and it’s great to design with restrictions [because], within those restrictions, there’s a lot of freedom,” Snoeren mused.

For the Barcelona show, the designers had booked the Xavier Corberó Center for Research and Artistic Activities, a labyrinth of arches, niches and nooks that was once home to artist Xavier Corberó, on the outskirts of Barcelona. Unfortunately, a downpour scuppered their plans and the show was hosted at the fairgrounds overlooking the city’s Plaça d’Espanya.

The 37-look collection epitomized the house’s edgy take on haute fashion, imbued with surreal touches and off-kilter details, from the short, dotted or crystal-encrusted veils covering only the face and knotted like handkerchiefs to the sturdy, buckled mules.

“The nice thing is that we know that our audience is extremely varied, very diverse,” Snoeren noted.

Column-like strapless dresses featuring ruffled over-gowns mingled with A-line multitiered organza concoctions and jumpsuits layered under billowing nightgowns trimmed in organza flowers. Meanwhile, androgynous looks including a silk column complemented by a cape asymmetrically knotted on one shoulder, and a ’60s short dress covered in flower embellishments made for the breeziest part of the lineup.

Their signature sculptural silhouettes were translated into more wearable pieces, albeit whimsical, as the duo noted wearability is a constraint they embrace with gusto.

“I think our design shows a certain rigor and purity, which does feel modern in this world that is so very romantic and feminine. We love it to be romantic, but we also want it to have a sharper edge, so that there’s some modern friction,” Snoeren observed.

“Our customers would tell us that what we do is different and for us it feels natural…but to them it feels different, and I think this has to do with the rigor and boldness in our pieces,” he noted.