Designer Cynthia Vincent didn't invent the cool style that is the signature of the California girl, but she has become a leading resource, season to season. 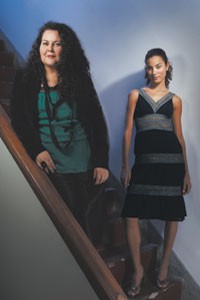 LOS ANGELES — Designer Cynthia Vincent didn’t invent the cool style that is the signature of the California girl, but she has become a leading resource, season to season.

Vincent has collected quite a following, including Scarlett Johannson, Rachel Bilson, Gwyneth Paltrow and Cameron Diaz, along with retailers such as Barneys New York, Holt Renfrew, Madison, American Rag and Neiman Marcus.

“The fits are fantastic, and the prices are right,” said retailer Tracey Ross. “They’re fun and you can buy it and wear it that night, which is exactly what girls like Nicole [Richie] and Lindsay [Lohan] eat up.”

Vincent, whose collection is on view this week at her Cooper Building showroom here, said, “Everyone talks about doing a mix of elements, references. But to me, I’m most successful when a woman picks some pieces and makes them her own. And they become her favorite because she feels most feminine, most sensual — and comfortable in them.”

Her vision and mettle has prevailed through three incarnations. The latest — Twelfth Street by Cynthia Vincent — may finally be the charm.

The two-year-old brand is projected to hit $12 million in wholesale volume this year and is poised for growth into a multicategory brand. This month the first holiday flats and heels in snake-printed leathers and African print fabrics from her first footwear line ship to retail.

A capsule denim collection of jackets, skirts and trousers, along with chambray dresses and shirts, will break later in the season. And Vincent is considering an eyewear line, executed in-house instead of through a licensee. A signature “grocery bag” in soft suedes and leather, some nail studded, launched in the spring to positive results. And an expanded bag line, produced in Italy, is slated for fall 2006.

“Each delivery is double and a half the last one,” she said. The collection — from specialty tops to cashmere sweaters, silk dresses to wool brocade coats — wholesales from $98 to $450.

She sold more than 6,000 — and coped with imitators — of a signature short-sleeved jacket cut in velvet, cracked leather or tarnished gold sequins.

This story first appeared in the October 18, 2005 issue of WWD. Subscribe Today.

With a distributor for France and England starting with spring deliveries, finding an Asian distributor is next on the list. She already sells to Barneys Japan and Joyce Hong Kong.

So what’s different now? There is a business partner, Armen Gregorian, who jibes with Vincent’s ideas. Gregorian is a business whiz who parlayed his interest in a board sports line (called Shok Clothing) into the dot-com arena before getting back into fashion with Vincent.

Experience, however, has also played an integral role: working for others and starting her first two companies.

In the last year, the loss of both her father and brother shook up her close-knit family and led her to take stock. Her older sister, Gisel Vincent, heads production. “Production is beautiful now, it’s on par with the design,” the designer said. “As bad as things are personally, there are a lot reasons to enjoy what’s happening here.”

The El Paso, Tex., native moved to Los Angeles as an infant. Vincent graduated in 1988 from Otis Parsons School of Design, having won the Silver Thimble Award from Ann Cole. She left for London, where she quickly rose through the ranks to become head designer at Jane Ong & Co. Ltd.

Back in California in 1991, she designed for several companies before founding St. Vincent in 1998. At the time, a new wave of Los Angeles designers was redefining both the industry and the look of fashion here. Along with Alicia Lawhon, Magda Berliner and others, Vincent helmed the creation of the Coalition of Los Angeles Designers, a support group that would pitch in with each others’ presentations.

She folded St. Vincent into Vince, a knitwear firm, two years later. Although the line was successful, Vincent grew disappointed with the culture her associates created and she broke off in early 2003, deciding to go to India for an extended stay.

But then came 7th on Sixth, which had decided to stage a formal program in Los Angeles. “I worked too hard with the [fashion] community here not to be a part of it,” recalled Vincent, who has continued to mentor fledgling designers and students although she’s no longer involved in the coalition. She limited her India getaway to two weeks and launched a new business.

Twelfth Street by Cynthia Vincent is named after the street she grew up on in greater Los Angeles. And Vincent has taken great care to ensure this venture operates as something wholly her own, down to the mission of always doing exactly what she wants to wear, which appears to have resonated with her fans.

“After working with and for others, I wasn’t going to go into this without doing it my way,” she said. The 3,000-square-foot downtown studio loft, where all design and administrative and sample-making duties take place, is a pristine white space filled with natural light. The warehouse is a couple of floors down.

Vincent and her partner had seriously considered investing in cultivating other young designers as a way of diversifying and growing the company.

“But instead of backing other people, I decided to build my business, to diversify into other categories. That’s where the shoes came in. Do I have shoe experience? No. Can I learn? I’ve been learning about all the elements, and we have the expertise of our Italian manufacturer.”

“There’s still a lot of potential in building this brand,” said Vincent, who has an eye on showing in New York in February. “I have enough creative ideas to keep going and going.”