There is only so much quality vintage fashion to go around, and American dealers are beginning to feel the bite of their own success.

The springtime opening of Hudson Yards was a study in things new and shiny. But inside the Neiman Marcus store there, a rack of vintage clothes stood out among a sea of box-fresh Balenciaga sneakers, straight from the runway Loewe handbags and floors of buffed marble and steel.

The archival bomber jackets and cocktail dresses, curated by Los Angeles-based Resurrection Vintage, were the latest sign that vintage clothes have become part of mainstream shopping culture. Once considered fashion fringe, vintage has now permeated all ranks of the retail chain — spotted on the racks of luxury retailers like Neiman’s, Harrods and Isetan; the subject of weekend destination shopping fairs, and even the basis for an eco-friendly line at Urban Outfitters.

But this frenzy for old clothes has created something of a catch-22 for the vintage industry: Business is booming, but there are only so many desirable old clothes in the U.S. to go around. “The only way to cope with supply and demand is to make more, and you can’t go back in time and make more things that are old,” said Veronica Norris, creative director of the Brooklyn, N.Y.-based boutique Amarcord. 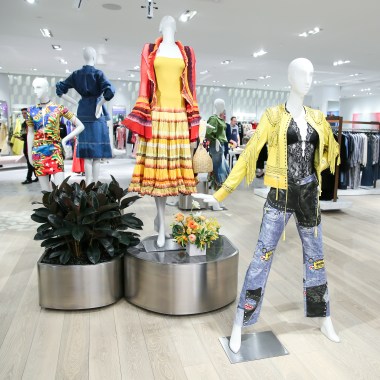 In recent years, dealers across the U.S. have begun seeing their supply chains dry up, requiring more effort and resources to unearth fewer clothes. According to industry sources, the price of high-quality vintage fashion (clothes that are in near-pristine condition, well-constructed, uniquely detailed and emblematic of their respective era) has skyrocketed by 50 to 300 percent in the last five years, now often matching or exceeding the price of new clothes.

“Everyone wants to be an individual, everyone wants to have a special standout piece, and they want to be green — they’re going thrifting and being more aware of the cycle of clothing,” Roberto Cowan, cofounder of Tucson, Ariz.’s Desert Vintage, said of the perfect storm of social trends that have created a vintage craze.

“There are more people buying and more dealers selling, and the product is not abundant anymore, so it’s becoming a challenge to find the level of vintage we are looking for,” Patti Bordoni, Amarcord’s cofounder, said of the rat race that’s been initiated in vintage dealing spheres, where clothes pre-dating fashion’s mass industrial era — the Fifties and earlier — are especially accumulating value.

“Things that were more common we could have let go for $65 in the past, and you can’t do that when you are paying $50 [wholesale] now,” Bordoni added. “We are talking about a 1970s beautiful dress in perfect condition,” she said, noting that the same dress would now sell for $175, factoring in all overhead costs and the travel required to source it. Amarcord says that 30 percent of its sources have disappeared in the last five years and its remaining wholesale partners are not as bountiful as they once were. 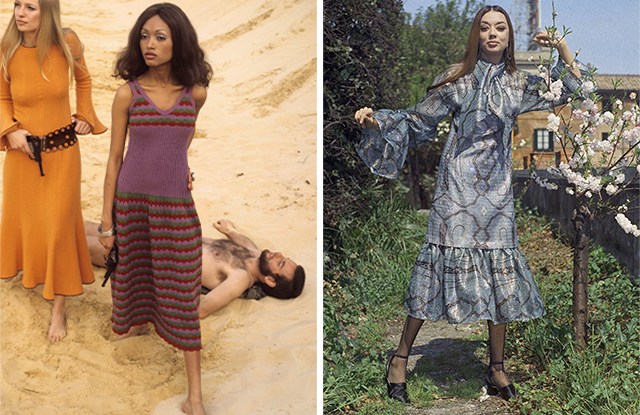 The word “vintage” has cultivated a heady brand awareness and its one-of-a-kind nature summons a see-now, buy-now immediacy from consumers. At the luxury vintage show A Current Affair, women have been seen buying entire racks of vintage clothes without inspecting their contents — like a mystery grab bag, arcade prize for the wealthy.

The larger retail community is catching on. Some better-known thrift stores in New York, long the stomping grounds for NYU students on a budget, have been seen to double the prices of their vintage clothes in recent months. Goodwill has even capitalized on the vintage moment — merchandising designer and premium vintage racks in its stores.

Trading vintage has now also become a sport for the young and entrepreneurial — with online vintage dealing portals like Depop, Etsy and eBay relying on a community of sellers who are gig-economy fluent and consider clothes as one of their many money-making pastimes.

In squeezing opportunity out of vintage’s moment, some Depop and Etsy dealers have taken liberties with the definition of vintage (traditionally meaning garments hailing from the Forties through the Eighties) to offer garments from the late Nineties and early 2000s with labels that reflect these eras. “There are people who just thrift and get a Champion sweatshirt and sell it for $100; that’s a stretch. I’ve seen a Polo sweatshirt for $400,” griped the Brooklyn-based, Instagram-famous dealer Gabriel Held. 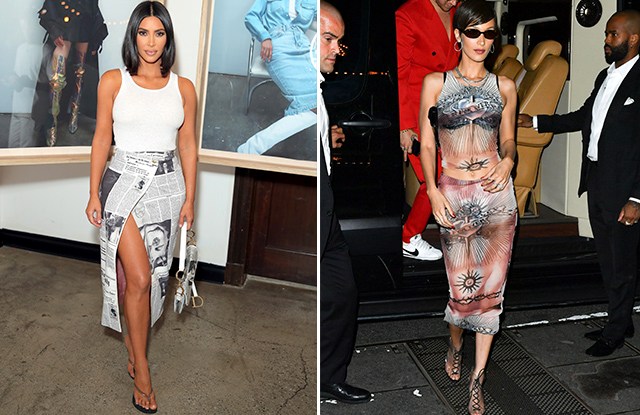 “The Internet and social media have made things much more competitive — anyone who wants to, at this point, can start an Instagram page and say they are a dealer. A lot of people start to deal and mess up the prices, which are not realistic and make the market screwy,” added Resurrection Vintage founder Katy Rodriguez — she of the vintage assortment at Neiman Marcus.

In previous decades, vintage dealers would buy clothes directly from estates of the wealthy — diving into closets that beheld a lifetime of treasures. Estate descendants did not hold the same reverence for their relatives’ clothes as they did their precious artworks and furniture — but now, they’ve wised up.

“When I go to estates now, the majority of those closets are coming from the Eighties, and the prices people charge are higher. You used to be able to buy a trash bag of clothes for a couple hundred dollars and now you go and the family is selling a 1950s prom dress for $250. They price it at the retail value,” said Jamie Viano, owner of Antique Wardrobe based in Southbridge, Mass. Looking for the biggest return on their material inheritance, some estates are also selling used clothes and accessories through newly established departments at Christie’s, Heritage Auctions and 1stdibs. 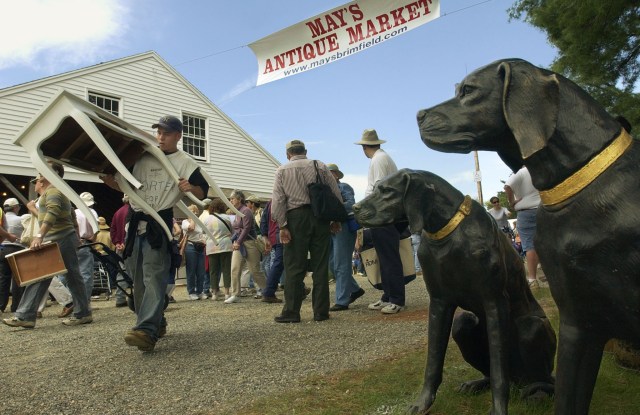 The scene at the Brimfield Antique Fair in Massachusetts, formerly a main supplier of vintage that is experiencing depleting resources.  Elise Amendola/Courtesy

Instagram has given way to a new generation of influencer-like vintage dealers who alter their assortments to reflect current fashion trends with old clothes. Mining their stock from more recent decades (the Eighties through early 2000s), sellers like Procell, James Veloria, and Gabriel Held have spurred renewed interest in forgotten brands. Held is responsible for renting archival Dior bikinis and Chanel sailor outfits to Kim Kardashian and Lil’ Kim, further proliferating vintage’s resonance within social circles that would have never before considered wearing old clothes.

Read More: These Are the Resale Web Sites Gaining Ground

James Veloria — a New York City vintage shop hidden within a Chinatown mall — helped contribute to demand for old Jean Paul Gaultier and Prada Sport, the latter of which was so successful that Prada reissued the brand last year to widespread fanfare. “It’s conflicting,” cofounder Brandon Veloria said of vintage’s current state. “It’s great because it’s pushing sustainability and ethical shopping to people who normally wouldn’t be caught dead in something old. But it’s a funny feeling that vintage has turned into a weird status thing.”

The store has recently helped revive interest for Vivienne Westwood designs — to a cannibalizing effect. Three years ago, the shop would sell the designer’s Brit-punk corsets for $150 to limited fanfare, and now — priced at $750 — they cannot keep them in stock. 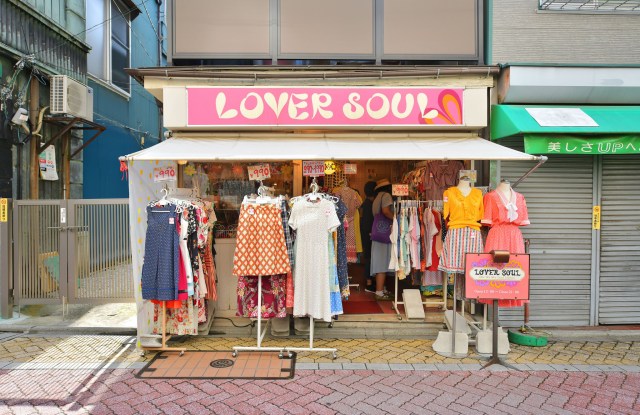 A vintage shop in Shimokitazawa — a shopping district of Tokyo.  Yukie Miyazaki/Courtesy

“When we started collecting Prada Sport we would buy 50, 80 handbags at a time because we could find them at such a reasonable price. Now it’s about preserving our profit margin while trying to keep our prices low — instead of tripling, we are doubling,” said Veloria. Just then, an Alexander Wang intern arrived at the shop to pick up an archival Longchamp bag that had been purchased for design inspiration — a brand that the James Veloria buyers have recently turned their attention to. And so vintage’s wheels will continue to turn.

“The U.S., and the East Coast in particular, was always a major source of clothing for everyone in Europe, Japan, everyone would come to buy at the Brimfield Antique Fair and leave with large amounts. This year my friends came from Barcelona and left with two bags, whereas before they would leave with 12,” said Viano.

France and the U.K. are now seen as more plentiful sourcing grounds for antique and vintage. Cowan and his business partner Salima Boufelfel are heading to France later this month in the hopes of discovering new resources. “It’s like using a water well — you don’t want your source to die out, so you always have to be thinking of a new spot to go next,” he said.