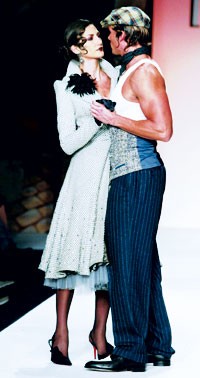 Corey Lynn Calter: Expectations ran high for Corey Lynn Calter, whose previous L.A. shows were among the strongest and most cohesive the Left Coast has ever seen. And she proved herself worthy of all the attention, sending out a stunning collection that suggested a cocktail of chic items found in a Paris flea market. The uncontrived outfits struck a balance between eclectic and easygoing, as in a vintage-looking lace capelet tied over a blouson-sleeved sweater and a floral silk skirt. While Calter deftly plucked details from across the decades, there was nary a whiff of retro posturing. There were ribbon-tied pearl collars, oversized houndstooth jackets and khaki-green coats belted in satin and worn over bias-cut velvet dresses. Signature shoes and bags were introduced, and the peep-toed pumps tied in nicely, although the kitten heels with upturned toes lacked the same sophistication. But it didn’t matter, since Calter continued to work her charms in printed fabrics featuring cars, eagles, acorns and even chickens. Her clever and intoxicating line proved she’s developed from a popular regional designer to one worthy of wider recognition.

Louis Verdad: Virtually unknown a year ago, he’s now an A-list favorite, and many wondered whether Louis Verdad could deliver on his advance billing. He did, with a beautiful and entertaining presentation that closed fashion week with a bang. (Michael Kors even showed up unannounced and made a beeline backstage after the show.) The Mexican-born designer didn’t stray from the Thirties- and Forties-tinged looks he does so well, showing tailored suits, hourglass dresses and dramatic, torch-singer gowns. In a Paris-influenced tableau, two hunks, clad in ribbed undershirts, tweed corsets and pinstriped pants, sat at a cafe table on the runway, ogling the parade of femme fatales, occasionally taking one of the ladies in their arms to tango. Verdad’s sirens, meanwhile, were shrink-wrapped in sharp, pinstriped suits, some trimmed in wide swaths of vintage fox. A standout tweed poncho had constructed shoulders suggesting sleeves, while a sultry strapless wool plaid dress that skimmed the ground with several layers of ruffles purred Rita Hayworth. Sure, there were a few looks that looked as if they could have come right off the Paramount Studios back lot, but that’s why Verdad’s modern-day divas — who include Madonna and Cate Blanchett — call on him.

Tyler: Departing from the downtown look of previous seasons, Richard Tyler took his secondary line, Tyler, uptown for fall with a polished collection perfect for the daughters of customers of his signature line (or those aspirational fans). Fifties-flavored coats and jackets that were knee-length or cropped high above the waist came in a marvelously magnified pink-and-black houndstooth. Slim wool plaid pants were the perfect alternative to pencil skirts, while a group of short dresses color-blocked in antique pink and gunmetal gray were cocktail ready. Rounding out the retro looks were high-waisted trousers with wide cuffs paired with tailored men’s shirts and short-sleeved jackets. Just how Tyler managed to transfer the tailoring and detailing of his pricier collections into pieces that cost 10 times less is a matter for his production manager to figure out — and his younger customers to stock up on.

Frankie B.: In designer Daniella Clarke’s California dreams, Laurel Canyon princesses combine denim with diamonds to create that perfect hybrid of boho and rock-girl sex appeal. For fall, she shrunk velvet blazers and paired them with sensual creamy charmeuse shirts unbuttoned to the navel. And there were loads of the low-waisted jeans and trousers that Frankie B. customers have come to expect, much the way that hard-rock fans look for T. Rex’s “Slider” in any decent rock compilation (which, appropriately, was part of the show’s soundtrack). She also introduced denim in a finish somewhere between faded and almost new that she christened the “California wash,” and which she cut into tiny A-line minis and jeans. But among the biggest hits were the loose-fitting tube tops and the barely legal microdress of tissue-thin, shimmery Indian paisley.

Shay Todd: Shay Todd took full advantage of the fact she had the lone swimwear show of the week, and presented a strong, tightly edited collection that inspired many guests to hit the beach — and the gym. The sleek, sophisticated bikinis channeled Ursula Andress of “Dr. No,” with alternate splashes of preppy chic and showgirl glam. The expertly cut, low-rise bottoms in shades of neutral and sherbet hit that elusive mark between sexy and flattering, and were complemented by simple triangle tops, halters and bandeaus. Todd’s swimsuits have been held in high regard over the past two years, but it was her debut resortwear that was the biggest hit. Sleek terry cloth separates such as a motorcycle jacket, cargo short-shorts and tunic dresses captured the hip-hugging silhouettes of the Sixties, evoking images of Jackie O cruising the Riviera. More elaborate pieces like an open-weave tunic and ombré chiffon blouses proved that a smart bikini and coverup are all a modern glamour girl needs to rock a resort.

Joe’s Jeans: Joe Dahan’s three-year-old jeans line has earned its rightful place among California’s fashion-forward denim elite, and his first runway presentation cemented his position as one of the most imaginative in that category. The designer’s ode to futuristic Gotham architecture — as seen in films like “Blade Runner” and “The Fifth Element” — manifested itself in bright, draped cotton knit tops paired with sleek, minimalist denim jeans and jackets cut with subtle asymmetrical lines. The neutral-hued sportswear separates took a slightly more feminine form in nubby tweed jackets with fur collars, delicate yet deliberately ripped sweaters and dressier trousers. And the pieces retained their edge with supersleek tailoring and creative styling. While showing 21 jeans and sportswear looks could have easily bored a runway crowd, an innovative, well-choreographed presentation by the Japanese dancer Oguri, complete with robot steps and symbolic dance moves, complemented the collection. Once the audience looked past the engrossing theatrics, the great clothes came into clear focus.

Eduardo Lucero: Eduardo Lucero decided to take Twenties’ speakeasy glamour for a whirl this season, and while it was a promising notion, the collection was inconsistent overall. Gangster-tailored blazers and pinstriped suits looked costumey, and dresses slit sky-high or draped to reveal naked hipbones were too revealing and not sexy. There were a few standouts, such as the striking black femme fatale gowns and the color-drenched halter dresses in various shades of fuchsia that had a wonderful liquid quality. But in the future, Lucero would do well to temper his over-the-top silhouettes, and stay away from retro shtick.