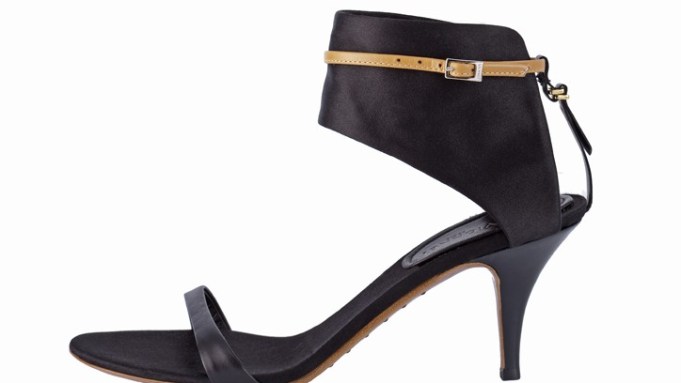 As he continues to remake French fashion house Vionnet into a modern — and Italian-based — brand, Matteo Marzotto has enlisted a countryman to speed the process along: Milan shoe designer Giuseppe Zanotti.

“The value of having [Zanotti’s] experience at our disposal is to work on different shapes, to work in the best way with different materials,” explained Marzotto of the spring pre-collection which will be launched today in Milan. Previously, Marzotto said, the company had worked with a smaller Italian factory.

Marzotto, the former chief operating officer of Valentino SpA, teamed up with Marni chief executive officer Gianni Castiglioni in February 2009 to acquire Vionnet. The co-owners swiftly handed Rodolfo Paglialunga, a longtime Prada designer, the creative reins of the company. Paglialunga will work closely with Zanotti on the shoes, which will be available in every door selling Vionnet (about 100 retailers, according to Marzotto). The 25-piece pre-collection will retail for between 450 and 600 euros (about $555 to $740).

A mix of leather and silk fabrics comprise the lineup, some strappy with color-blocked patterns and others with wrap ankles and flat soles. These are not replicas of the fashion house’s storied designs, however. “I made no references to the Madeleine Vionnet shoe archive,” Paglialunga noted.

That said, delivering a restrained elegance was important to Zanotti. “These are the opposite of the trendy shoes,” he said. “Nothing heavy, nothing out of proportion, elements from the Thirties and Forties to the present.” Zanotti, who has worked with Christophe Decarnin of Balmain, Proenza Schouler, and Thakoon on shoe collections, said he welcomes a young perspective on the design process (Paglialunga is 43). “I’m 53 years old, absolutely an old shoemaker,” Zanotti said. “But we are absolutely partners. We want to make the woman feel wonderful, but stable with the heel.”

The shoe collection is an integral, yet only partial, component of the growing Vionnet brand. Licensing other categories, Marzotto noted, is very much on his mind. “Madeleine Vionnet [was] one of the first designers to do perfume,” he said. “In the Twenties, she started with four different scents. So there’s a strong history there. We’d like to restart these things, but not too much at one time.”