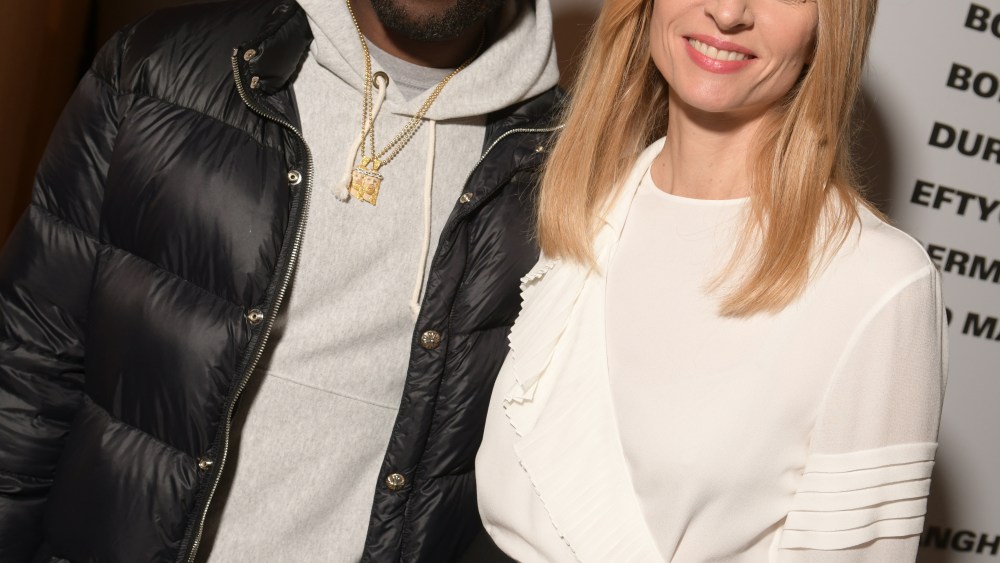 PARIS – Upcycling, experimenting with new fabrications and melding cultural references emerged as key themes at the cocktail held for the 20 semifinalists of the LVMH Prize for Young Designers at the headquarters of luxury conglomerate LVMH Moët Hennessy Louis Vuitton.

“Designers this year are all very concerned with sustainability, which is really inspiring to watch. A lot of them are also gender fluid, which I like a lot,” said Ferragni, who is part of this year’s committee of international experts tasked with choosing the 10 finalists.

“It’s great for me to be able to use my voice and my platform to support emerging designers,” added Ferragni, who was the official ambassador for Friday’s event.

Among the nominees was London-based Bethany Williams, who received the Queen Elizabeth II award during London Fashion Week, in the presence of the Duchess of Cornwall.

She is best known for incorporating a social purpose to her work: For her fall 2019 men’s wear collection, Williams partnered with the women’s shelter Adelaide House, creating illustrations of the women who live in the shelter on her roomy tailoring pieces and donating 20 percent of profits to the charity.

“Everything is either organic or recycled, and I also work with different social projects on the manufacturing. I use Downview Prison on the jersey manufacturing, and a drug rehabilitation center to develop handwoven fabrics from waste,” said Williams, pointing to a blazer with 3D embroidery made of recycled newspapers.

“My sell-through has been really strong, so it’s a promising sign that customers are responding. It’s about who is making the garments and the garments themselves. It should be a 50-50 approach,” she added.

Preston, who is also keen to incorporate upcycling into his own work, listened attentively to Williams’ pitch and said he was impressed by her approach. “I love the fact that there are all kind of sustainable initiatives, and it was inspiring to just hear that. Everyone’s brain is there now,” he said. “The culture shifting is great.”

Abloh agreed. “It shows that the world is changing. Young people – that’s kind of the ticket we rode on. We’re literally standing here because we won the youth vote, but that’s awesome that, if you take people below a certain age, they already have instilled in them a responsibility towards people and Mother Earth,” he said.

Paris-based Kevin Germanier is another participating designer who committed to upcyling from the get-go, creating glamorous dresses using beads or sequins found in Hong Kong landfills.

“It’s all still made out of waste. These sequins are transparent because they were left in the sun,” said the designer, pointing to a structured minidress with sequin appliqués. Since launching his label and being picked up by retailers like Matchesfashion.com, he has tried to broaden his product range to include upcycled denim embellished with rubberized glitter, T-shirts and more dramatic gowns.

“The idea is that sustainability can be fun and glamorous,” he told Campbell, another committee member who roamed around the venue interviewing designers and taking notes. “This is insane. What a wonderful way to approach it,” the model said, holding a lilac Louboutin pump customized by Germanier in upcycled beads.

Emily Bode has also adapted her production methods as she grows her New York-based men’s brand Bode, which is carried by 45 retailers worldwide, including Matchesfashion.com, Browns, Bergdorf Goodman’s B shop, and Galeries Lafayette’s new flagship, opening in March on the Avenue des Champs-Elysées.

“It began as one-of-a-kind and now, what we bring to market is not necessarily one-of-a-kind. Some of our stores prefer it, and then some of our stores would rather have the reproduced textiles that we do: intricate hand embroideries in India, patchworking in our New York studio,” she explained.

“Someone like Ssense sells all of the one-of-a-kind still, but Matches has bought both the one-of-a-kind and the reproduced garments,” added the designer, showing off a shirt made from a needlepoint fabric inspired by a 1950s curtain. As a result, Bode is hiring more senior staffers and expanding in-house manufacturing.

Caroline Hu, one of the breakout stars of New York Fashion Week, where she presented her first collection last month, still makes all of her ethereal ruched dresses by hand, working with a patchwork of materials including velvet, silk organza and a paper-like waterproof fabrics.

“It’s all handmade, but if I need to produce, I need to have a budget to build up my handmade studio, so maybe this is an opportunity for me here to explore my production power,” she said. “I want to go step by step to know more about the business part.”

She said that meant not being tied to a single technique. “I will not be using smocking forever. Romanticism is my keyword, so around that keyword, I can make different things. I don’t want to do just one thing,” she remarked.

Amsterdam-based Duran Lantink sources vintage or off-season designer garments, pulls them apart and mixes them together to create new one-off pieces. “This is upcycling taken to the next level,” he said. Think multicolored jersey midi dresses created using cut-up vintage Dolce & Gabanna, Marni and Kenzo pieces, or a trench consisting of a mash-up of two Burberry coats with a printed Dior back panel.

“I even try to mix the groups, which is a little dangerous here: We have Gucci with Louis Vuitton, Chanel and Dior,” said the designer. “It’s a really healthy relationship of working with stores too. We don’t make collections, we treat each piece individually.”

Bergdorf Goodman’s Linda Fargo, who also sits on the committee of experts, said it was hard to narrow down the finalists.

“I only get to pick eight designers and I’m having a hard time with that. A lot of these young designers are very concerned about the backstory and everything in their work is very thoughtful – we asked someone for their business card and they said that they’d love to connect but digitally, so we don’t waste paper,” she said.

“Fashion is a reflection of broader concerns and it’s great to see that younger people will help improve our world. There is also some strong commercial potential here,” Fargo added.

For Chiuri, what stood out was that while all designers are concerned about the same issues, they are approaching them in different ways.

“I’m impressed to see that each designer has their own language and the aim here is for us to give them a bigger voice,” said the Dior designer, who had her eye on Greek-born designer Eftychia Karamolegkou and her collection of loose, mannish tailoring for women.

Bernard Arnault was paying close attention, picking up a handwoven suit by Nigerian designer Kenneth Ize to feel the fabric, inspired by the aso oke cloth woven by the Yoruba people. While the fabric is made locally, the designer outsources the tailoring to Hungary and Bulgaria and the samples to Vienna, where he studied at the University of Applied Arts under Hussein Chalayan and Bernhard Willhelm.

“It’s very difficult to produce in Nigeria because we don’t really have a production company,” Ize explained. Though fans of his brand include Campbell and Iman, being selected for the prize felt like a breakthrough for Ize, who plans to launch a women’s wear label at Arise Fashion Week in Lagos in April.

“It means a lot to me. This is my dream. I went to school because I never saw any African designers. Eight years ago, there was Duro Olowu and a few other fashion designers, but there were no designers my age or anything like that, and it was very sad for me,” he said.

The transgender actress, part of the all-star cast of Louis Vuitton’s pre-fall look book, said it was a positive time for minorities in fashion. “I’m doing the best that I can,” she said. “I appreciate the intentions of Louis Vuitton to utilize me to represent their brand and to represent myself and all the intersectional identities that I hold.”

Magugu said he hoped to use the opportunity to represent South Africa. “I love the fact that I get to showcase what’s actually happening in the country through my clothing,” he said, showing off a magazine he produced as a platform for other designers, stylists and fashion photographers.

“I feel like it’s been largely overlooked as a country that adds anything to fashion, but I think there’s something quite exciting and bubbling happening right now. Hopefully I won’t be the first and the last,” Magugu added.