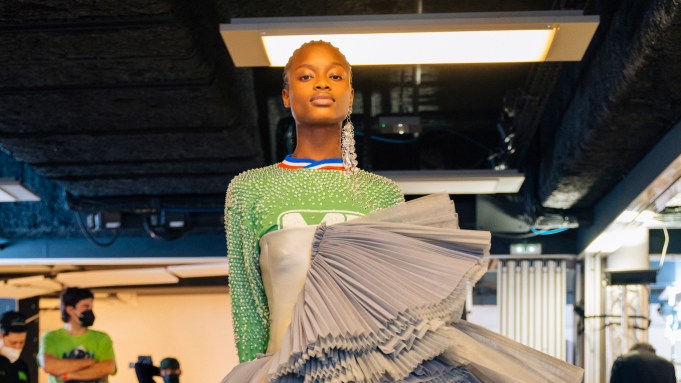 PARIS — Off-White’s tribute show to its founder and creative director Virgil Abloh on the first day of Paris Fashion Week was a multidisciplinary affair livestreamed from dozens of local storefronts, including the Galeries Lafayette department store. It also marked the brand’s arrival on TikTok, with the platform’s first interactive live show.

On the runway, the big news was the launch of the brand’s “High Fashion” line, a lineup of 28 looks conceived and finalized by Abloh before his death in November from a rare form of cancer.

This was haute couture for the Gen-Z set: think a technical jacket paired with an organza plissé skirt, and reimagined archetypes like a sequined “Little Black Dress” featuring Abloh’s signature text in quotation marks.

Also making their debut as part of the “Spaceship Earth: an Imaginary Experience” show: a skiwear capsule for women and men, featuring oversize skate-influenced shapes in performance textiles, and shoe collaborations with Church’s and Nike. Models wore makeup from the brand’s first beauty collection, Off-White Paperwork, set to launch this spring.

To cap it all off, Off-White is debuting a two-week Paris Fashion Week takeover of Caviar Kaspia, one of Abloh’s favorite eateries, with an on-site experience that reimagines the restaurant’s entrance, decor and tableware, with an exclusive homeware and ready-to-wear capsule collection launching online on March 8.

If during his lifetime, Abloh was a ubiquitous presence during the Paris shows, this season proves his spirit lives on in the French capital.

Year in Review: ‘Virgil Was Here’: A Look at the Life and Death of Virgil Abloh