The designer presented a blend of Eastern European constructivism and Nineties streetwear for spring 2017. 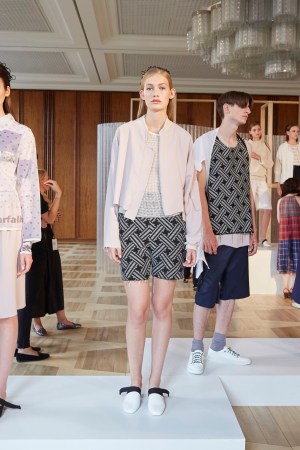 “Don’t go chasing waterfalls, please stick to the rivers and the lakes that you’re used to,” the band TLC urged in their 1994 song “Waterfalls.” That’s exactly what Vladimir Karaleev did in his latest collection.

Set against a corrugated iron-like plastic “waterfall,” the 15 women’s and men’s wear looks advanced Karaleev’s characteristic interpretation of East European constructivism with a blend of Nineties streetwear. Once again dismembering conventional construction, he reworked collars, arms and plackets into sophisticated drapery and style elements in tops and dresses. The word “waterfalls,” along with floral tattoos and light blue polka dots, subtly appeared as prints on organza muscle shirts and blouses. Light polyester and cotton-macramé were juxtaposed with heavy cotton plaids reminiscent of plastic Chinese carry-all bags, and a geometric black-and-white jacquard also provided graphic impact. Open seams and slits meandered along the garments, while piping worked to stabilize the sculpturelike silhouettes.

He did venture off the familiar waterways in one way, enlivening his traditional light beige and dark blue color palette with nuances of white. “The brightness of white always scared me, but I felt like it was time to open up this season,” said Karaleev. Perhaps the move mirrored the further opening-up of his label’s retail distribution channels, especially in Japan, the U.S.and the Middle East.