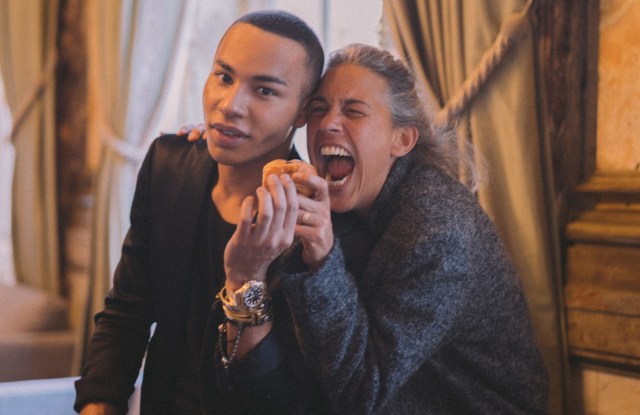 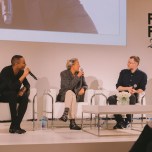 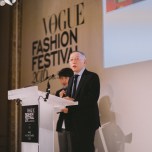 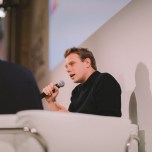 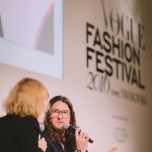 PARIS — Some 400 attendees took in the inaugural Paris edition of the Vogue Fashion Festival that ended its two-day run at the Hôtel Potocki on Saturday. Highlights of the event aimed at the fashion industry and the public included the opening speech of Tadashi Yanai, chairman president and chief executive officer of Fast Retailing, the Japanese company that owns Uniqlo and several other brands; a Q&A session with Jonathan Anderson, and a talk with e-commerce honcho Vente-privée.com founder, president and ceo Jacques-Antoine Granjon. A conversation with Olivier Rousteing and Isabel Marant on life as a designer today brought out a capacity crowd.

“Bonjour” read the first slide of the presentation of Fast Retailing’s Yanai, whose presence in Europe felt like an event. In his soft-spoken way, his wife dressed in a kimono sitting in the front row of the room, he addressed the audience in Japanese with a translator talking about the evolution of clothing through the ages and stressing the importance of local communities for the group that counts 3,160 stores worldwide. “Global is local. Local is global,” he said. “You have to pay respect to the culture. In Paris, New York, Shanghai and Tokyo we have R&D centers. Uniqlo Paris’ R&D center is led by artistic director Christophe Lemaire and he’s working on the Uniqlo’s U line. It’s a coincidence that we’re opening a new store in Paris at Marché Saint-Germain,” he concluded, hastening to add: “I invite you to visit the store after the conference.” He cited the tie-up with the new Tate Modern building in London and Uniqlo Free Friday Nights at New York’s MoMA in which the group sponsors free admissions on Friday evenings from 4 p.m. to 8 p.m., as one of the examples of how the group pays respect to the communities. “Going forward we want to organize similar events and opportunities in Paris as well,” he said.

Sitting down with Vogue Hommes editor in chief Olivier Lalanne, Anderson said he keeps a close eye on numbers yet reinvents himself each time. “Each collection has to be a new type of reinvention or you would become foreseeable,” he said.

He created his J.W. Anderson brand in 2008, and took the reins of the artistic direction of LVMH Moët Hennessy Louis Vuitton-owned brand Loewe in 2013, and stressed that brands should have a viewpoint.

“I always say I am a creative director, not a fashion designer,” Anderson said. “The reason being that over the last ten years, brands have become multifaceted. I feel it’s about directing. As much I would like to say I do everything from start to finish myself, if I did that I probably wouldn’t get much done. Being a creative director is about directing your team and how you get the best result from them.”

How does the creative process work? “The way I work is very research-based, from books, art, vintage fashion — I can be inspired by almost anything. For both brands I do 12 collections. Every month or two, we put everything into a room and decide in one day what is going to go into each one, draping and pinning on a model to produce the template of a lineup from a massive amount of research. I’m very clear on who the customers are for both brands. For me, there’s one eye, which is my eye and I have to kind of make quick decisions so that it keeps the process going,” he said.

On balancing the two brands, he said: “I oversee my label in London and I work in Paris for Loewe, which is a Spanish brand. I spend a lot of time in the Eurostar. In a weird way, Eurostar is a great thing because it ultimately gives you two-and-a-half hours where you have very poor signal and you are stuck on your own. By the time I get through the channel, my mind is already on Loewe and on my way back, it’s on my own brand. I am very commercially driven. For me, the most important thing is to grow because if you grow, you can employ more people, it means that more things can be done.”

Does he keep an eye on figures? “Every morning,” replied Anderson without hesitation, adding that he receives the Loewe numbers at 7:30 a.m. daily and his label’s in the evening. “For me, it’s the most rewarding thing. It’s a barometer to tell you where you’re at.”

Asked about his viewpoint on luxury, he said: “I don’t believe in luxury anymore,” he said noting that today you can find “luxury sausages” at the supermarket. “Luxury became this go-to word in marketing. Luxury is about craftsmanship, skills…How do you turn Loewe — certainly a luxury brand — into a cultural brand, which ultimately represents the craft?”

When asked about the next revolution in fashion, he said that it’s to face up to “the reality of the cost of fashion and evaluating the human cost against financial gain.” On the see-now-buy-now strategy, he said: “If the product is good enough, you will wait,” recalling having “waited and waited” for a Hedi Slimane Dior T-shirt he was obsessed with as a student at university. “There’s nothing better than desire.”

Time is also key for Jacques-Antoine Granjon, founder, president and ceo of French flash sale pioneer Vente-Privée.com that partners with more than 9,500 brands in sectors including ready-to-wear and accessories. “The relationship with the brands is something that you build over time,” he said

“Tech and logistics is at the center of the minimum you have to do when you want to do e-commerce,” he said, noting that Vente-Privée.com delivers 100,000 orders per day. Vente-Privée.com went from being a one-million-euro company in 2004 when new developments on ADSL were made to 100 millions two years later and 1 billion in 2009. (The company logged a turnover of 2 billion euros, or $2.29 billion, in 2015.)

“The fascination of digital comes from the infinitely small — one click — to the infinitely big — if it works, you can reach the planet. It all boils down to the execution of volumes,” he said. “I like the idea that we’re at day one of the adventure,” he also said, noting that Vente-Privée.com has succeeded in its home market but has failed in the U.S. and “it’s quite a challenge to succeed in Europe.” (On Nov. 2, Vente-privée.com announced it bought a majority stake in Polish online player Zlotewyprzedaze.pl as part of its ongoing expansion through acquisitions in Europe. In the last year, it took a majority stake in Danish e-commerce web site Designers & Friends and has bought its competitors Vente-Exclusive.com in Belgium, Privalia in Spain and Eboutic.ch in Switzerland.)

Rousteing and Marant have more in common that what you think. Both do six collections per year, work out (swimming for Marant and boxing for Rousteing), did collections for H&M and cast Gigi Hadid for their spring shows. Journalist Loïc Prigent led the discussion.

On his relationship with fast fashion, Rousteing said: “It’s very important to be copied. The day a trend doesn’t come to the streets, it will mean there’s a problem.”

Marant touched on the label’s expansion : “Today, I create six collections per year: two Etoiles, two pre-collections and two runway shows. I won’t do more. If I did a men’s collection, there would not be a show, it would be more intimate. I’d love to work on a capsule, but I don’t want to launch a new collection,” she said.

The house just tapped Anouck Duranteau-Loeper, previously Paco Rabanne executive, as general manager joining Nathalie Chemouny and Sophie Duruflé, Marant’s two original partners and general managers. “Anouck is coming to help out on our new developments. She’ll focus on our new projects,” Marant told WWD after the panel. She was speaking in the garden of the Hôtel Potocki, where she had stepped out for a quick cigarette (followed by a throng of fans seeking an internship and a selfie opportunity with the designer). “The idea is to grow the brand, through fragrance, accessories, bags and eyewear and a little bit of men’s wear. It’s something that I have always felt strongly about and I don’t want to do it within shows. What’s so interesting with the Internet is that it allows us to launch new projects in new ways and to experiment. The timeline isn’t set yet. We’re launching the bag collection first and we’ll go step by step.” On the session with Rousteing, she said: “Our styles are diametrically opposed, yet we are facing the same issues and we have the same way of thinking.”