By Rosemary Feitelberg and Marc Karimzadeh on July 18, 2006
View Slideshow 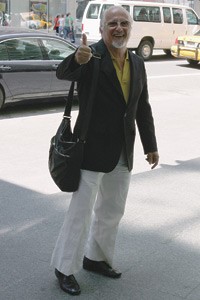 NEW YORK — Diane von Furstenberg, the newly minted president of the Council of Fashion Designers of America, hopes to create an organization “so that people who are members of the CFDA are proud to be members.”

Minutes after a secret ballot vote at a CFDA board meeting Monday that determined her win over Joseph Abboud, the 59-year-old von Furstenberg outlined her vision for the two-year term she will start in October when Stan Herman steps down after 15 years in that role. Last year, the bylaws changed, restricting CFDA presidents to two two-year terms.

“I want to really work on all the benefits this membership gives,” she said. “The most important thing — and I would like this to be my legacy — is to really create an incredible network service system.”

Von Furstenberg spoke at CFDA’s Broadway headquarters, to which she was whisked in her green Bentley. It’s an indication of the sense of glamour and grandeur — and power — that she could bring to the organization.

“I would like to go to the mayor and see what he can do for us,” she said. “Our mayor appreciates that the fashion business is a huge business, and I would like to see what we can do together. We will have to talk about the endowment, and overall, create more of a brand for the CFDA, which is something I know how to do.”

Von Furstenberg also hopes to increase the rapport with the CFDA’s international counterparts, France’s Chambre Syndicale and Italy’s Camera Nazionale Della Moda. “I know both Didier Grumbach and Mario Boselli, and I want them to respect us, and I think we will be the best of all the organizations and they will look up to us.”

As president, von Fursten­berg will serve as the public face of the organization, but she also has a mandate to galvanize the fashion community and respond to the members’ needs. In addition, she will work closely with executive director Steven Kolb, who joined the organization last December, to raise funds.

For von Furstenberg, the presidency was as much about her vision for the organization as her personal goal of giving back to the fashion community.

This story first appeared in the July 18, 2006 issue of WWD. Subscribe Today.

“It appeals to me that I think I can add something. It’s the challenge,” she conceded. “I am at a moment of my life in which I have become, whether I like it or not, a senior person. And when you become a senior person, you give back and you teach, and you use your experience. It’s nice. I was a little girl from Belgium. I became the designer, and I am now the head of all the designers of America. It’s a big honor.”

There has been much ink devoted to the showdown between von Fursten­berg and Abboud, who were each given 10 minutes to address the CFDA board.

The candidates’ remarks to the crowd reportedly tipped the scales in favor of von Furstenberg. Abboud opted for notecards — not the type of finesse the image-conscious crowd is accustomed to — and his speech was “stilted,” according to one insider. His presentation speech was also interrupted by a fire alarm within the Condé Nast Times Square headquarters, where the meeting was held.

Von Furstenberg, on the other hand, preferred to be more off-the-cuff, speaking without notes and mentioning how she could get senators and other politicians on the telephone without batting a perfectly mascaraed eyelash. With no Q&A to speak of, a secret vote followed. “There was not a lot of discussion. It was sort of anti-climactic,” one attendee said.

“I wasn’t going to prepare anything because I wanted to speak from the heart,” von Furstenberg recalled afterwards. “Five minutes before I left, I panicked so I sat at my computer and wrote down points to have a roadmap.”

Her speech to the board members seemed heartfelt, raising issues of what the presidency means to her personally, as well as the vision she has for the organization.

“I said first that seven years ago, Stan asked me to join the board, and it was only one year after I had started my business again,” von Furstenberg said. “At the time, I was very insecure about whether my business would pick up and I felt a little bit like an outsider. The idea that I was invited to the board was actually a very warming thing and it made me feel good.”

In the seven years on the board, von Furstenberg became actively involved in the organization, and was a part of the process of hiring two executive directors — Kolb and before him, Peter Arnold.

When it became time to find a president to succeed Herman, von Furstenberg took an active role in the process.

“I wanted Kenneth [Cole] to get the job but he felt he was really busy with AmFAR. I even called Calvin,” she recalled. “Then Joseph came and said he wanted to do it and I thought it was a good idea. A couple of board members suggested to me that I should do it, but I said I really didn’t have the time. Then, the more I was trying to sell the job to other people, and tried to make it [sound] nice, I sold it to myself. It’s like when you raise money and you can’t raise enough, you say “OK, I will write you the check.”‘

She got her final kick, so to speak, from Vogue editor in chief Anna Wintour, who asked her to lunch one day and explained how important the CFDA, as well as the CFDA/Vogue Fashion Fund, had become to her. “I said I can’t, I don’t have the time,” von Furstenberg recalled. “I can’t campaign, and she laughed and said, ‘I will do that for you.'” Wintour’s was the first call von Furstenberg received after winning.

“I would not have been a candidate if it wasn’t for knowing that Steven is there as a director,” she said. “Two weeks ago, I called him and said, ‘you have to promise this to me, otherwise I am not doing this.’ I have an insurance policy on him.”

Herman, 75, the outgoing president of the CFDA, said: “I am confident about the future of the CFDA in Diane’s hands. It seems that with her enthusiasm, energy and ability to build, we will have a very productive two years ahead of us. She came out of the shadows seven years ago, I put her on the board, and she has primed herself for this position. This is a woman who has matured and has produced a fashion legacy, and how wonderful is it that this presidency will be a part of that legacy.”

Abboud said he was driven to get involved by having “a passion for what designers go through and the battles they fight.”

He said he will continue to serve the CFDA through his affiliation with its executive committee, board of directors and scholarship committee. Last year Abboud donated $250,000 for design student scholarships. “I wanted to support the next generation of designers. That’s where our future is,” he said. Fashion Targets Breast Cancer is another CFDA-backed initiative that he will remain committed to.

Abboud said he did not spend last weekend making last-minute phone calls to try to sway voters. “I tried not to do that. My belief is perhaps they already had their minds made up. I just thought, ‘This is a smart board. They know what they want to do.'”

Following the meeting, several CFDA board members and designers commented on the final vote, the break-down of which couldn’t be learned.

Oscar de la Renta readily admitted, “I am biased because Diane is a friend and I love her.” A former CFDA president, de la Renta noted that the organization has changed considerably since he was in charge, namely, the group has an infrastructure.

“Diane has been extremely successful in her business. She is very well-known, and she is the kind of person who, as she said, if a call needs to be made, everyone will know who Diane von Furstenberg is. At this stage, that is very important for the CFDA.”

Michael Kors added, “Diane has really spent a lifetime in fashion. She has an idea a minute, and an amazing network, inside and out of fashion. Plus, she has great legs.”

According to Vera Wang, “We had two really incredible candidates because to be perfectly frank, both brought so much experience, energy and desire to the table. The decision had to be a very impersonal one in some way, because they are both loved by everyone on the board.

“Diane is planning to dedicate a great amount of time to this effort,” Wang added. “She certainly has connections far and wide. She will lend such glamour alone and international importance to America and that cannot be underestimated.”

Nicole Miller noted that both had their strong suits. “Joseph was good. He had more time on his hands. Diane is so well-connected.”

Coach president and executive creative director Reed Krakoff noted, “At this point in her career, Diane has so much to give. She has the dynamism to help the CFDA get to the next place. I’m a big fan of Joseph as well. Maybe he will be the next president.”

Gerard Yosca added, “I think both of the candidates were fantastic….[Diane] brings a polished, lucid voice, and a real international presence to the organization. She speaks many languages and knows people around the world that she can pick up and call at the drop of a hat, whether they be politicians or people who run European fashion organizations. She’s also dealt with laws against copying, so she’s wonderfully positioned to help the organization continue to fight that as she is somebody who knows about this firsthand.”

Until von Furstenberg assumes the post in October, she will spend time with Herman, Kolb and CFDA members on formulating a program. Von Furstenberg will also be instrumental in drumming up funds to support the organization itself. This year, the CFDA is receiving its last payment of $540,000 from IMG, which bought the rights for the fashion shows in Bryant Park from the organization in 2001. The Council needs to recoup the loss of that income somehow next year.

“Right now, I have a few months to talk to a lot of people, put a program together, then everyone has to approve it,” she said. “I like plans because then I can execute them. I have a very short term, and I want to make the difference quickly.”

During the meeting, three new board members were confirmed: Francisco Costa, Isabel Toledo and Leigh Bantivoglio. Mary Ann Restivo and Carolina Herrera have completed their terms as board members and will step down.

— With contributions from Jennifer Hirshlag, Sophia Chabbott and Whitney Beckett