The Bush ladies presented a softer family portrait this week in their style and speeches, with critics on both sides finding the effect, well, “Bushie.” 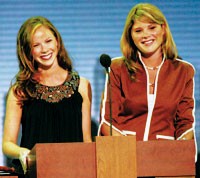 NEW YORK — The ladies of the Bush dynasty presented a softer family portrait this week in their personal style and personable speeches, with critics on both sides of the partisan fence finding the effect, well, “Bushie.”

As 22-year-old Barbara Bush, wearing a black dress with a beaded neckline from Catherine Malandrino, explained in the Bush twins’ appearance at the Republican National Convention on Tuesday night, “Bushie” is a cutesy term of endearment her parents call each other. With her sister, Jenna, who wore an Oscar de la Renta brown satin jacket with jeans, the twins attempted to present President Bush more as hip dad than rash cowboy, much as First Lady Laura Bush portrayed her husband as having agonized over the decision to go to war, rather than rushing into it.

Their remarks, combined with the sophistication of Laura Bush’s turquoise de la Renta jacket and knee-length skirt or the playfulness of the twins’ appearances around the city in frilly Rebecca Taylor tops, may have endeared the Bushes to those who most wanted to peer inside a family life that has largely been kept private during the past four years. Yet the idea of Jenna Bush pronouncing, “Our parents are actually pretty cool,” had the opposite effect on their detractors, the word “Bushie” giving many Democratic-leaning designers a case of the shivers.

The overall reaction on the convention floor that night to the First Lady’s speech and the style of the Bush women was much as it was in the fashion industry on Wednesday. Republicans loved them and Democrats either bitched or bit their tongues.

Taylor, who hosted Jenna and Barbara on a shopping spree at her Mott Street store on Aug. 3 as the First Lady approved their selections, was surprised to see the twins turn up in her designs at a Republican party on Sunday night and then again on “Good Morning America” Wednesday.

“The girls looked really cute and fresh, but I’m biased, of course,” said Taylor. “It’s nice for the Republicans to have a couple of cute, fresh, young and energetic girls representing them.”

De la Renta, naturally, was beaming from the Bushes’ family box at Madison Square Garden on Tuesday night as he watched Jenna and Laura Bush speak wearing his designs. He waved a “W Stands for Women” poster as the First Lady stood in her bright turquoise suit against a background of red and white flecks, a none-too-subtle salute to patriotism. Some found it contrived, others, perfectly appropriate.

On Wednesday, de la Renta said of his first political convention, “I’ve seen it on TV, but to be there on the floor is something quite different. It’s an American experience.”

The designer liked that many of his fellow guests in the family’s box were old friends of the Bushes from Texas.

“I think that says a lot for them that their friends then are their friends now,” de la Renta said. “Mrs. Bush even mentioned that in her speech.”

But the designer, who also outfitted Teresa Heinz Kerry for her speech at the Democratic National Convention, insisted he’s not playing party favorites.

“I just make clothes people identify with,” he said. “I’m not trying to make a political statement. My political beliefs are part of my private life, not part of my professional life.”

That said, the two sectors do cross from time to time. De la Renta said he has known Heinz Kerry for more than 25 years. His late first wife, Francoise, befriended Heinz Kerry in Switzerland before she wed John Heinz. New York Sen. Hillary Rodham Clinton is another friend and client.

Earlier this week, Judith Giuliani stopped by de la Renta’s showroom with husband Rudy to pick up a few suits for the conventions. Judith wore one of her finds Monday night when the former New York City mayor addressed the convention and a black bouclé number to a tea in her honor Tuesday at the National Women’s Republican Club.

De la Renta was pleased to see Jenna Bush pair one of his jackets with jeans at the convention Tuesday night. “I thought that was really quite wonderful,” he said. “That was sort of living proof of what we are trying to do — dress mothers and daughters.”

Neither Bush nor Heinz Kerry asks de la Renta about the other’s personal taste, nor would he disclose such things, he said. What he will say is that Bush has “extraordinary” eyes — a compliment he shared with the First Lady shortly after meeting her.

“I told her, ‘You’re going to think I’m extremely ungentleman-like, but you have the most unbelievable sapphire blue eyes,’” he said.

Whoever winds up in the White House, de la Renta naturally hopes to suit up either woman for the inauguration. “I do hope they would come to me, but this is a free world,” he said. “What they choose is up to them, but I hope they choose me.”

As for who the designer plans to choose on Nov. 2, he said, “In my voting, I have always voted not for the party but for the person. I voted for Clinton, but I voted for Reagan, too. I only vote for winners. But I’m not going to tell you who I’m voting for.”

Others in the fashion industry weren’t quite so politic in expressing their views of the Bush women.

“Laura turned out to be an absolutely stand-up, fantastic speaker,” said Mary McFadden. “She’s dressed conservatively, which is her style, and her face is beautiful. Those eyes she has twist upward. She was remarkable last night, even though she got less press than Arnold Schwarzenegger.”

“That color of blue is really pretty and she looked really nice,” added Alice Roi. “I’m not going to say I loved the suit, but I don’t think they’ll let her wear anything else. Her approval rating is quite high, so she’s probably doing the right thing.”

“She looked OK — she’s quite attractive, really,” said Daryl Kerrigan, who maintained a healthy skepticism. “I wonder if she’s had a lot of work done. She looked kind of sculpted.”

“I thought it was uninteresting and the two girls didn’t seem terribly prepared,” he said, then questioned the bracelet-length sleeve of Jenna’s jacket. “I didn’t get the sleeve on the jacket of the blonde chick.”

Dennis Basso said Bush wore a “jewelry suit” in that it needed a necklace or a pair of pins. She probably toned it down for the cameras so as not to distract viewers from the her speech, he said.

“It was beautifully tailored and suited her beautifully, but it could have used some jewelry,” Basso said. “You know whoever bought that same suit would load it up with jewelry.”

Nonetheless, the twins’ participation in their father’s reelection campaign is representative of the effort to increase Bush’s appeal to young voters. Of the younger members of the audience on Tuesday, several were enthusiastic supporters of Barbara and Jenna, many of them showing a sense of style that was contrary to the Republican stereotype. A group of college students representing the hotly contested state of Florida were firmly in the twins’ camp.

Delegate Sheri Valera, 21, a senior from the University of Florida who had just had a fashion makeover, care of Style Network’s “The Look for Less,” and was working a silky cream top with a red ribbon belt over a camel pencil skirt, said, “I loved the Bush girls. I think they’re so cool.”

Dana Roberts, 20, from Florida Atlantic University, added, “I think they’re so real about who they are.” She said, “The First Lady is always magnificent — so classy, so poised. She’s a really good role model for young women who want to be more conservative, who want to be kind of old-fashioned.”

Dan Chwalisz, 21, from the University of North Florida, said, “I think they have a very strong message and they use their charm to get it across. As a male, they strike that note and you want to listen to what they say. They’re very cute.”

From the fashion industry’s perspective, the twins have their detractors and enthusiasts, but there are few designers who would kick them out of their showroom.

“Barbara had a better dress on, but Jenna has the power,” McFadden said. “The blonde one could definitely be a politician. She took her sister out.”

— With contributions from Rosemary Feitelberg and Nandini D’Souza