Vuitton Doubles Up in Hong Kong

Louis Vuitton has opened its second Maison here, a mammoth 18,760-square-foot store on Canton Road that rivals the company's flagship on the Champs-Elysees in Paris in scope and size. 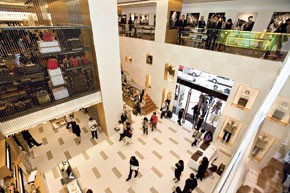 HONG KONG — Louis Vuitton has opened its second Maison here, a mammoth 18,760-square-foot store on Canton Road that rivals the company’s flagship on the Champs-Elysées in Paris in scope and size.

Hong Kong is now the only city in the world with two Louis Vuitton Maisons, one on each side of Victoria Harbour.

Yves Carcelle, chairman and chief executive of Louis Vuitton, said the city’s unique layout and the booming influx of tourists here merited the second Maison. “Hong Kong is really a unique case, where the two sides of the water really divide the place — kind of like Budapest. We wanted to celebrate the two sides of Hong Kong at the same time,” he said, acknowledging customers on either side of the harbor have different demographics and needs.

“In Central there is a sophisticated clientele but a lot of tourists, too. At Ocean Terminal, the flow of traffic is totally fantastic, it’s incredible — and we need to provide such a volume that meets the need of the crowd.”

Carcelle said the Tsim Sha Tsui neighborhood where the new store is located has been destined to change since the late Eighties, when the One Peking Road project came up for tender (Vuitton lost the bid to Hong Kong billionaire developer Li Ka-shing). “At that time retail was on Nathan Road and this was the first development there,” recalled Carcelle. “I remember standing in front of the Dior store and thinking it’s sad; but I said to my team, ‘We missed this one, but it doesn’t mean we should miss this area.'”

Vuitton opted for Canton Road, deciding to take a large space with a street-facing facade rather than a store inside the attached mall. “That transformed Canton Road,” said Carcelle, who added, “To be able to participate in the beautification of a city like that is very satisfying.”

The store represents numerous benchmarks for Vuitton. It has the longest “bag bar,” the largest watch and jewelry salon, and is the first with two private VIP rooms, one of which serves as “The Room of Marvels” to display some of the company’s “les extraodinaires” products. “Canton Road is really incredible because of its size,” said Carcelle. “We don’t have any other city where five of our stores have the whole line, including ready-to-wear, but Hong Kong deserves that because there is a local clientele and there are shoppers from around Asia,” he said.

The interior is devised around a “promenade” theme, with interconnecting platforms and levels, each a distinguished selling space. The ground floor is dominated by a wall of handbags and a giant LED screen featuring a video of melting gold called “Luxury is Slow” by Venetian artist Fabrizio Plessi. The ground floor and its mezzanine also feature salons dedicated to footwear, luggage, accessories and handbags.

On the second floor, the men’s area is divided into separate spaces for rtw, suits and shoes — each with its own sitting area and accessories displays. The steel fixtures and cooler colors of the men’s departments yield to bronze and cream in women’s rtw, which is located on the next level. The selling areas include separate salons for casualwear, more formal attire and footwear.

Up one more level resides the bookshop, watch and jewelry collections and the art gallery. For the opening, the company is displaying photographs by actor Chow Yun-Fat. “He’s an amateur photographer but what is interesting for us is that he took his first photograph at the opening of our store in Champs-Elysées,” said Carcelle, who is particularly fond of Chow’s photograph of actress Gong Li.

For the Canton Road opening the company has issued a number of limited edition designs based on the store’s gold color scheme. (The Central store is similarly decorated in silver for the festivities.) Marc Jacobs designed two ensembles consisting of a jacket, top and skirt made from metal mesh embroidered with mohair thread, rhinestones and crystals. Only one set in silver and one in gold (both size 36, about size 6 in the U.S.) exist. The company has also issued limited edition Bellevue Miroir handbags — silver for the Central store and gold for Canton Road — as well as patinated crocodile shoes for men and women.

And each of the Maisons has limited edition Ursula Strass sunglasses with Monogram medallions, as well as a very limited selection of Mahjong Charms (only 88 pieces have been made). Two Tambour watches, named for Canton Road, were made for the opening as well.

Although Carcelle declined to project revenues for the store, he did say the company intends to keep growing in Greater China. “No one can ignore the fact that you have 1.3 billion people in Asia who are changing their lifestyle very quickly,” he said, noting Vuitton will have 25 stores in Mainland China by the end of this year and “probably 35 by the end of next year.” He added, “The potential is unlimited when you consider there are 103 cities with more than one million people. At the same time, here [in Hong Kong] there is a very sophisticated local clientele. When you mix that with the amazing travel retail, I don’t see Hong Kong slowing down for the next five to 10 years.”

Similarly, the company is expanding in neighboring Macau, where it is preparing to open its fourth store, at the Four Seasons hotel complex.