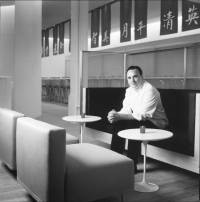 While 2002 delivered a glut of comfort food, The Strokes and their imitators, and turned the world into one giant yoga zone, 2003 promises pleasures of its own. Technology will embolden a new school of film heroes. Exercise fanatics will take heart rates as low as they can go. And Jean-Georges Vongerichten will turn the fortune cookie haute.

More New York than any French bistro are the city’s Chinese restaurants, which day in and day out provide an urbanite’s true comfort food. Recently, however, foodies have been taking a fresh look at Chinese cooking, making their way down to Chinatown’s low-key favorite Yeah Shanghi Deluxe or heading to Grand Sichuan International to sample traditional fare.

And the opening of Jean-Georges Vongerichten’s Chinese spot 66 at the end of January makes it official: Chinese cooking is all the rage. Vongerichten will serve everything from dim sum to Peking duck to sesame noodles in the sleek TriBeCa restaurant, designed by Richard Meier with a glowing wall of saltwater aquariums and flapping red flags.

For Vongerichten, who has long championed fusion cuisine, eating Chinese food in New York is only natural, after all. “Once you have the palate, there’s no going back,” says Vongerichten. “You’re seduced and you want it every day.”

The next generation of video artists practically grew up with digital cameras in their hands. They know their film editing software inside out, and they’re much more subversive than their predecessors. Early 2003 will see shows by emerging video artists everywhere, including Chloe Piene’s edgy, fearsome video work at Klemens Gasser & Tanja Grunert in New York and an exhibition of Dutch artist Aernout Mik’s eerie hyper-real imagery at The Project in Los Angeles.

At the Studio Museum in Harlem, assistant curator Christine Kim will launch “Veni Vidi Video,” a video exhibition that will run 24-7 in the museum’s lobby and will include work by 11 artists, such as rising stars Iona Brown, Rico Gatson and Kevin Everson. “The next generation takes advantage of the familiarity a contemporary audience has with television and film and are able to integrate that with high art,” Kim says. “Appeal isn’t their objective, but their work does communicate so well.”

It’s not a miracle pill. But the Power-of-10 — a once-a-week, 20-minute resistance training workout that promises to get you into “the best shape of your life” — might be the closest thing to it. Who has time for daily 90-minute yoga classes, anyway?

According to Adam Zickerman’s new book, “Power-of-10” (Harper Collins), the weekly regimen is five to eight repetitions of six basic exercises. Each rep lasts 20 seconds: 10 seconds to lift the weight, and 10 to lower it. “It takes the muscle to a very deep level of fatigue,” explains Zickerman, between training sessions at InForm Fitness, his New York center. One follower claims he went from “buffalo to buff in just two weeks!” A former aerobics instructor reports, “My butt is higher.” Other devotees include time-starved execs like ceo’s and publishers. What are you waiting for?

Farewell to the fair-haired yummy-mummies with the blown straight locks. This year’s “It” girls are younger, sexier and single to boot. Curvy with cleavage to spare, and — gasp! — brunette at that, they know how to have a good time.

Emerging from the pack are Fabiola Beracasa, the daughter of Veronica Hearst who burst onto the scene last fall after sowing her European oats, and Serra Kirdar, an exotic beauty who’s every bit as glamorous as her big sis, Rena Kirdar Sindi, who paved the way.

Call it the Saint-Tropez influence or a by-product of fashion’s S&M streak: The sexy socialite is back. After all, girls just want to have fun, don’t they?