Wacoal America pulled out all the stops to celebrate its 20th anniversary in the U.S., which has reached annual sales of $117 million. 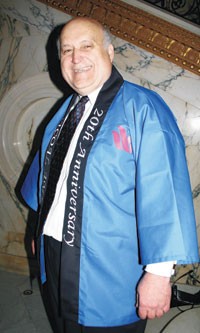 NEW YORK — Wacoal America, the U.S. unit of the $1.5 billion intimate apparel giant Wacoal Corp. of Japan, pulled out all the stops to celebrate its 20th anniversary of business in the U.S.

More than 300 retailers and suppliers turned out May 3 at The Metropolitan Club here, joining Wacoal executives from the Kyoto-based parent and the Wacoal France and American divisions. Festivities kicked off with a champagne cocktail reception, followed by nonstop sushi, sashimi and sake, as traditional Japanese drummers entertained guests.

Yoshikata Tsukamoto, president of Wacoal Corp. and chairman of Wacoal America, said he was “extremely honored” by the strong turnout, noting the U.S. operation is “very healthy.” Tsukamoto is the son of the company’s late founder, Koichi Tsukamoto, who started the business in 1949.

At Wacoal’s 10th anniversary festivities — also at The Metropolitan Club — the elder Tsukamoto told WWD the company had invested $120 million in the U.S. operation in the first decade. But in the early years of the U.S. venture, he said, “we did very seriously consider packing up.”

Today, the U.S. unit has been molded into a highly profitable lingerie business with the distribution of upscale Wacoal-branded bras and panties to major specialty stores such as Nordstrom, Saks Fifth Avenue and Neiman Marcus, and a successful designer business with the licensed Donna Karan Intimates and DKNY Underwear collections.

“Wacoal America’s business has tripled over the past 10 years,” said Richard Murray, president and chief operating officer of Wacoal America. “The first 10 years was all hard work and the next 10 years reaped the benefits for Wacoal. Sales right now are probably about $117 million annually, compared to $110 million the same time a year ago.

“We have built a very loyal base of Wacoal customers through our ability to successfully anticipate and respond to the changing tastes, preferences and physical needs of the American consumer,” he continued.

Murray estimated that Wacoal’s trained specialists at stores have provided more than 1.3 million free bra fittings to Americans since 1985.

Meanwhile, Gwen Widell, vice president of merchandising and design for Wacoal America, said reaction has been “tremendous” to the company’s newest bra introduction for fall 2005: the iBra by Wacoal, a feather-light style of Tactel nylon and Lycra spandex that has “no stitches, no seams and no tags.”

The iBra was introduced to the media in April at a cocktail party at the Wacoal showrooms here. Colors are black, nude, suntan and milk chocolate. Cup sizes are 32B to 38D. Suggested retail is $50.