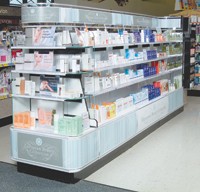 SAN DIEGO — Walgreen Co., the nation’s largest drugstore chain by sales volume, is rebranding its image by showcasing European prestige beauty brands in the most extensive effort the drugstore industry has ever seen.

The initiative is one that will plunge the 5,251-unit chain deep into the competitive fray with rivals like CVS and Brooks-Eckerd, which already operate their own exclusive beauty and wellness sections. The Walgreens effort could generate as much as $35 million to $45 million in sales its first year, according to estimates by industry sources. Chain executives assert that much of this revenue will be an incremental gain over existing beauty sales.

Walgreens, a $42 billion chain, is widely regarded as the nation’s second largest beauty retailer, behind Wal-Mart, with beauty sales accounting for as much as 12 percent of overall sales, a much higher share than the industry average.

In an off-site meeting at the start of the National Association of Chain Drug Stores Marketplace here earlier this week, WWD learned about Walgreens’ two-year journey to bringing premium skin care in a simple, affordable way to the mass market. While Walgreens’ move had much to do with a desire to outmaneuver its competitors, Michelle Hobson, Walgreens manager, strategic business development and beauty, said what ultimately drove the decision to carve out a masstige skin care destination is based on what the retailer is not doing well now.

“We need to be a better partner with our customers and deliver better concepts, and we need to be top of mind with her when she thinks of skin care,” Hobson said, adding that the effort will be a halo on the store. “It’s not just about building skin or beauty. It will brand us for the future.”

Hobson, along with several Walgreens vice presidents, including Kathy Steirly, divisional vice president and general merchandise manager for beauty and fashion, visited Europe three times, including a weeklong trip last fall, when the team met with as many as 40 European retailers, such as Boots and Carrefour. The visit solidified Walgreens’ decision to transform existing store displays, which currently merchandise promotional packs and new beauty items at the front of the store, into upscale-looking islands with brushed steel and metallic accents, glass shelves and curved fixtures in about one-fifth of the retail base.

Hobson’s main concern with the beauty endeavor was not just finding the right brands, but delivering them in a special way.

Enter Nick Hudson and Alain Torcat, founders of Excelsior Beauty, a beauty marketing company that works with brands and retailers in building masstige beauty offerings. The duo, former Boots The Chemist executives, partnered with Walgreens to develop European Beauty Collection, seven lines from five countries — France, Spain, Greece, Germany and Switzerland — representing some of the most popular lines in Europe. Excelsior Beauty is based in both New York and Paris, with a team of 10 people working on different accounts.

Most of the brands within EBC are privately held, with sales ranging between $400 million and $500 million. Hudson said many had put off entering the U.S. since both the mass and prestige arenas can appear daunting. In the mass market, just a small number of brands dominate sales, driven by very expensive national advertising. In department stores, the competition is fierce and has limited distribution.

Normally competitors, the seven brands will collectively offer more than 130 products, which will be sold exclusively at Walgreens until at least 2007.

About 20 items from each brand were chosen to best represent each line and to make selection easy. There’s Institut Arnaud Paris, a hi-tech face and body care line that has been widely used in French spas for more than 60 years.

Art Deco is a brand hailing from Germany and is the number-one selling skin care and cosmetic brand in department stores and perfumeries there, Hudson said.

Skincode Switzerland is a range of herb, plant, vitamin, and oil-rich items which are developed in conjunction with The University Hospital in Zurich.

Spa Aquatique is another French spa brand in the collection and uses marine-based formulas.

Oli, a Spanish brand, focuses on antiaging for the face, hair and body and uses olive oil as its base ingredient.

The EBC will roll out to stores in October and will be located on a 9-foot display adjacent to the skin care area. One side — a 2.5-foot endcap — will stock Art Deco, what is perceived to be the collection’s most exclusive brand, in an effort to stop customer traffic. Curved shelving and overhead signage is designed to lead customers to the collection’s six other brands on one side of the display, where every 18 inches another brand will be vertically merchandised. The display’s other two sides will stock promotional and new cosmetics items.

“We are making it look like a department store so that the customer shopping basic skin care can’t help but notice it. But what we are also trying to do with this front endcap is to get her to stop and say, ‘Where am I?'” Hobson said.

Some of the items sell for upward of $100 in Europe, Hobson said, but she aimed to find the right price for her customer in the mass world. Prices in the collection will range from $13 to $60 with the average price at $27, which is in line with items by Procter & Gamble’s Olay or Johnson & Johnson’s Roc.

“Our number-one item is a $29.99 one in our entire skin care wall and we have 500 items so our customers are really ready for this,” Hobson said.

While enticing its traditional beauty shopper, who may “trade up from Neutrogena to Skin Code,” Hobson believes EBC has the potential to attract and even convert a prestige and specialty shopper.

“Of course with anything there is going to be cannibalization, but I think ours will be very minimal because we are going to be pulling that customer who is outside of our world today.”

Walgreens’ employs anywhere from two to four beauty advisers in each of its stores across the country, each of whom will be key to the launch’s success. Their supervisors, about 80 strong, are being brought into Chicago, Walgreens’ headquarters, in August for a two-day training course talking about the brands, how to sell masstige beauty and how to select which brand makes the best sense for any given customer.

Testers — a new territory for Walgreens — as well as millions of samples, will allow shoppers to browse and educate themselves, too.

“Part of what will make this work as we try to mimic department store theater is sampling and testers. Each brand will have testers, brand cards and a self-serve manual, which will help those who want to shop in a self-service mode. The adviser will have samples behind the counter, too. That is a critical component and the vendors have invested in this,” Hobson said.

Consumers will learn of the new beauty offerings through Walgreens’ weekly print and direct mail initiatives, as well as an “e-vite” program and in-store radio messages.

The 12-month test will be evaluated closely and often, particularly at the six and nine months points, when alternate brands may be considered, based on performance. If successful, new brands will be considered for inclusion, as will items for the cosmetics, bath and aromatherapy categories.

What may give Walgreens’ EBC initiative an edge up from competitors is that it is a collection of different brands offering different end benefits. CVS, on the other hand, offers six of Boots The Chemists’ most popular homegrown cosmetics and skin care lines, which are now available in some 150 CVS stores. Industry sources said Target is planning to roll out the brands to all of its doors, and CVS plans to roll them out to 1,100 stores. About 10 Brooks-Eckerd stores feature Dermo Skin Care centers, offering European dermatological skin care brands Vichy and Avene. These store-in-stores look to differentiate it from competitors and generate store traffic from shoppers who weren’t purchasing skin care in drugstores.

Walgreens had actually tested one of these centers in their stores, but the EBC rollout will put a halt to further Dermo Skin Care experiments.

Wendy Leibmann, president of WSL Strategic Research of New York, said Walgreens’ move is about differentiation and in this consolidating retail world, creating a difference between “X” and “Y” can mean success or failure. The breadth of stores EBC will affect is a broad stroke for the retailer, she added.

“That is very different for Walgreens. They see they need to make a difference now,” Leibmann said.

Hudson views the masstige world as one that is only beginning to break ground in the U.S. and predicts that eventually drugstores will resemble their Canadian and European counterparts by offering even prestige brands.

“It might take 20 to 30 years but I think it will happen,” Hudson said. “I can’t see why the U.S. is the only market in the world where there isn’t a middle ground.”

— With contributions from Michelle Edgar and Faye Brookman