Walk This Way: A Runway Lesson

WWD gets a hands-on lesson on what goes into the perfect strut. 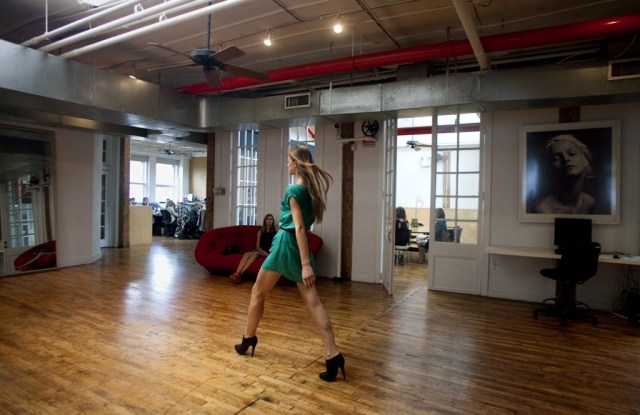 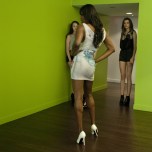 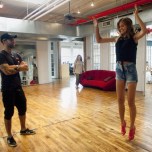 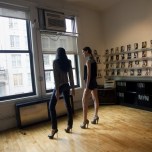 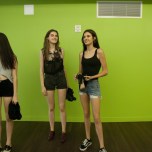 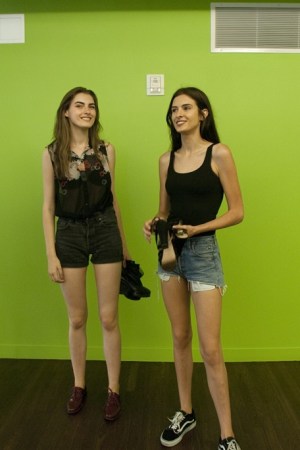 My runway career would have been short-lived.

Aesthetic requisites aside (I’m neither 5’11” nor a string bean), I am an acutely uncoordinated individual. I can’t imagine the pressure of taking to the runway. These days, not only do models have to sell the clothes to the press and buyers sitting front row, they also have to wow consumers watching — and critiquing — on their various devices. In short, a killer walk is more critical now than ever.

At WWD, we have seen many a catwalk jaunt but never considered what exactly goes into the perfect strut. The artful science of the runway walk is a meticulous one. A girl must give acute attention to the most miniscule of details, developing awareness of every body part down to her fingertips. This is no easy feat. (Take it from this reporter, whose editor coerced her into taking a hands-on approach to this story.) Most top agencies try to leave as little to chance as possible, enrolling their newest faces in walking classes — instructional sessions held at their offices in the days before the pre-castings begin in New York.

For gangly-limbed newcomers, the learning curve can be steep. “I’d never worn heels before this,” says one of New York Models freshest faces, an 18-year-old Dutch import who goes simply by Steffi. “I was always the tallest in my class, so I stood like this all the time,” she continues, hunching her lengthy spine.

So how does one go from Quasimodo amble to commanding Karlie Kloss saunter? As they say about the trek to Carnegie Hall: practice, practice, practice. “I worked with one girl every day for two months, for three hours a day before,” says Connie Fleming, the walking expert enlisted by Trump Model Management. “The girl had never put on a pair of heels before, so it took six weeks just to get her sea legs under her.”

The girls in my sessions agreed the footwear issue was daunting. “Oh, my God, yes,” says Trump’s Sasha Valarino, who arrived in sneakers, which she traded in quickly for a pair of Zara strappy sandals. “When you first put the huge heels on, you see everything from a whole new point of view. You almost feel perched. It feels crazy.”

Fleming, on the other hand, is no stranger when it comes to a staggering shoe. On this particular August afternoon, she’s wearing a pair of white six-inch stilettos that make my feet hurt just looking at them. “You can’t wear these for long because your toes go numb,” she says. Ostensible health risks aside, Fleming swears they’re the best style to train in. “They hurt but they really allow you to get to know the balls of your feet, which is everything,” she says. “Once you learn how to walk in these babies, you can step on a quarter and be like, ‘Oh, that’s tails.’”

Something of a fashion personality herself, the transgendered Fleming entered the industry in the mid-Eighties, via the downtown performance art party circuit. She was introduced to Patricia Field at Area nightclub, and the two became fast friends. “I just thought she was this very cool, creative person and I loved her hair,” Fleming recalls. “She was doing a group show at the time and asked me if I wanted to be in it.” Soon Fleming was walking on Field’s runways and later did turns for Thierry Mugler and Vivienne Westwood. “Those were the days,” she says. While helping Field with casting for a few seasons, Fleming discovered her knack for prepping models for the show. Others took notice. “I guess word got out that I was teaching girls how to walk because a friend at Supreme asked me if I wanted to show his new girls how to do it,” Fleming says. “That’s how it all started.” Now, she grooms the new batch of rising stars for Trump.

Fleming’s coaching style is distinct. Not one for tough love, she peppers her sessions with words of encouragement. The word “gorge,” short for gorgeous, is said 59 times in the 43-minute session. When criticism is given, Fleming is gentle, often starting the sentence with “That was almost perfect but…” When I do a lap for her, she makes me feel like I’m a hair away from supermodel-status. Her buoyant bent is deliberate. “I remember when I was that young; you’re insecure and awkward,” Fleming explains. “The smallest thing can reel around in your head for hours.”

Also, it works. Fleming says she’s found that incessant critique produces the adverse effect: a stiffening up of the girl. “The most common mistake is when girls let their nerves get the best of them,” she says. “Some people carry their nerves in their shoulders, in their arms, in their face and if you’re like a deer in the headlights, that’s not a very attractive look, darling.”

This is one school of thought. Others, such as Meandra Nel, who works with New York Models, think a little prodding can go a long way. “When I start tweaking, I can be quite annoying. While they’re walking, I’ll just call them out, ‘Fix your left hand, fix your left hand,’” Nel says. A model herself with NYM, Nel is tasked with showing the runway ropes to the agency’s new faces. “I have a lot more experience than these girls who are aspiring models,” she explains. “So I just decided I wanted to teach them how to do runway.”

In the 30-minute session, Nel is far from harsh but doesn’t hesitate to pipe up with a suggestion or two. “You’ve got to work on your stop; it’s a bit too abrupt,” she tells one model. “Your chin isn’t parallel to the floor,” she tells another. She schools the girls down the nuance, such as how much cross over they should give each stride. “For New York, it’s one foot in front of the other, perfectly straight,” Nel says. “You don’t want too much overstepping, more natural.” Steffi, who is being taught by Nel, later confides in me that she’s been envisioning a tightrope on the sidewalks so she can practice everywhere she goes. “I tell them after, ‘I’m not trying to be mean,’” Nel says of her teaching method. “I’m really not. I just want them to be so perfect when they walk that they just kill it.”

Perhaps it was this approach that worked for Nel when she started out. After winning the Ford Supermodel South Africa contest in 2005, the then 19-year-old pursued modeling while balancing school (she was in her first year at University of Pretoria studying veterinary biology). It’s clear Nel’s tenure in academia informs her technique, with her most important piece of advice for aspiring catwalkers being, “do your homework. Watch all the shows online, go do some research on your favorite model and look at her walk. Ask yourself why you think her walk is so good,” Nel offers. “When I see an improvement, I know they’ve been studying.”

Carlos Ojeda and Paulo Santos, top bookers for Supreme who lead the agency’s walking sessions, agree; emulation can be a powerful tool. “We’ll get a show up on YouTube and say, ‘Look, come here, sit down. See what she’s doing?’” Santos says. The two aim to establish what they term a “base” walk through their training seminars, urging the importance of tailoring the walk to meet the clients’ requests. “We want them to be confident in their base so when the client says, ‘Make it sexier or do it faster,’ they won’t be thrown off. They’ll know how to alter it from there,” Ojeda says.

The two even keep their girls informed on what the big clients’ specifications are season after season. “For Marc Jacobs, it’s the run-for-the-bus walk. At the casting, that’s what they tell girls: ‘Act like you’re running for the bus,’” Ojeda says. “With Prada, they don’t like sexy. They like zombie, sort of straight on.”

“If a girl goes in for a Balenciaga casting and starts swinging her arms a lot in front of Nicolas [Ghesquière], that’s going to turn him off,” Santos adds. “He wants more soldier, not to do like a cha-cha-cha thing.” “I call it ‘the new face walk,’” Ojeda chimes in. “Nicolas loves a brand spanking new girl, so a good portion of the girls in the show have an awkward walk. Now it’s sort of part of the look of his shows. We want our girls to know that and to feel prepared.”

As for my own walking instruction, the preferred posture — shoulders way back, hips way forward, arms loose but not swingy — couldn’t have felt more awkward. Knowing I was a fashion failure after my first class with Fleming (despite her kind adulation to the contrary), I practiced covertly at home. Now at Supreme, I brace myself to walk for Ojeda and Santos, knowing I should be ripped to shreds. You know what? I feel better — not good, not comfortable, but a little less klutzy than my first time out. “Oh, you got this!” Santos says. It’s a lie, but one I welcome.

NEXT: Casting a Spell >>

With a mere minute or two of face time with a casting director, making a good impression at this week’s castings is crucial. Here’s what the experts tell their girls.

DO
• Prep by wearing heels, all the time. Santos: “Even before the new girls come to New York, we tell them to start walking in heels. Wear them to school. Wear them out. Wear them watching TV and doing the dishes.”

• Dress the part. Ojeda: “We dress our girls before they go on show castings and some will be like, ‘I don’t like that; that’s not my style’. I tell them, ‘everyone dresses differently for work. These are your work clothes.’”

• Play hard to get. Ojeda: “Clients don’t like desperate girls. Play it cool.”

• Relax your shoulders. Fleming: “Not only do they need to be back, but open. A lot of girls forget about that. Open shoulders convey confidence and ease, and it elongates your neck.”

• Be cognizant of your arms. Ojeda: “When they’re swinging all over the place, I call it ‘the drunken sailor.’”

• Finish strong. Nel: “Your walk back needs to be just as good as your walk there.”

DON’T
• Be rude. Santos: “Wearing too much perfume on a casting can be rude. Chewing gum can be very rude. Not wearing heels when you walk in is the worst.”

• Zone out when you walk. Fleming: “To be engaging, you need to be engaged yourself.”

• Trip! Ojeda: “But if you do, laugh it off, brush yourself off and get back up before the next girl walks all over you.”