By banning gun sales in all of its stores, Walmart could send the powerful message that lives matter more than profits. How much money is enough? How many deaths are too many?

By Bridget Foley
with contributions from Sharon Edelson
on August 6, 2019

The memorial along the street after the mass shooting that happened at a Walmart in El Paso, Texas

A thin marigold banner atop the homepage bears a somber message: Our hearts go out to everyone affected by the events in El Paso. See our statement.

One click on walmart.com takes you there. We are in shock over the tragic events at the Cielo Vista Mall in El Paso, where Walmart store #2201 and Sam’s Club #6502 are located. We’re praying for the victims, the community and our associates, as well as the first responders who are on the scene. We’re working closely with law enforcement and will update as appropriate.

Following the shootings in El Paso, Tex., and Dayton, Ohio — and let’s not forget the Gilroy Garlic Festival in Gilroy, Calif., where “only” three people were murdered — anyone who believes in God has surely said a prayer for the dead; the injured; their loved ones; their communities — specifically, the Hispanic community that was so perversely targeted in El Paso; the first responders, and maybe even for the villains and potential future villains who, for whatever reason, are filled with the hate and rage that leads them to commit such atrocities. But prayers without action are at best hollow and at worst hypocritical.

Today, you can walk into about half of Walmart’s 4,756 stores across the U.S. and buy a gun. The El Paso massacre has not prompted a change in that position. “There’s been no change in our decision to sell firearms,” a Walmart spokesman told WWD on Monday. “Our focus has remained on being a responsible gun retailer and adhering to our procedures and policies. Will we stop selling guns? Not at this time.”

How sad! Wouldn’t it be something if, while praying for the victims, the community, the retail associates and first responders, Walmart paid swift and concrete tribute to all of them by pulling all guns and gun accessories from its shelves? Period, basta, gone. Of course, that wouldn’t eradicate the threat of gun violence in our gun-obsessed culture; would that a solution could be so easily procured. But it would send a powerful message of corporate leadership and bravery focused on one of the most alarming issues now facing our sadly fractured society. 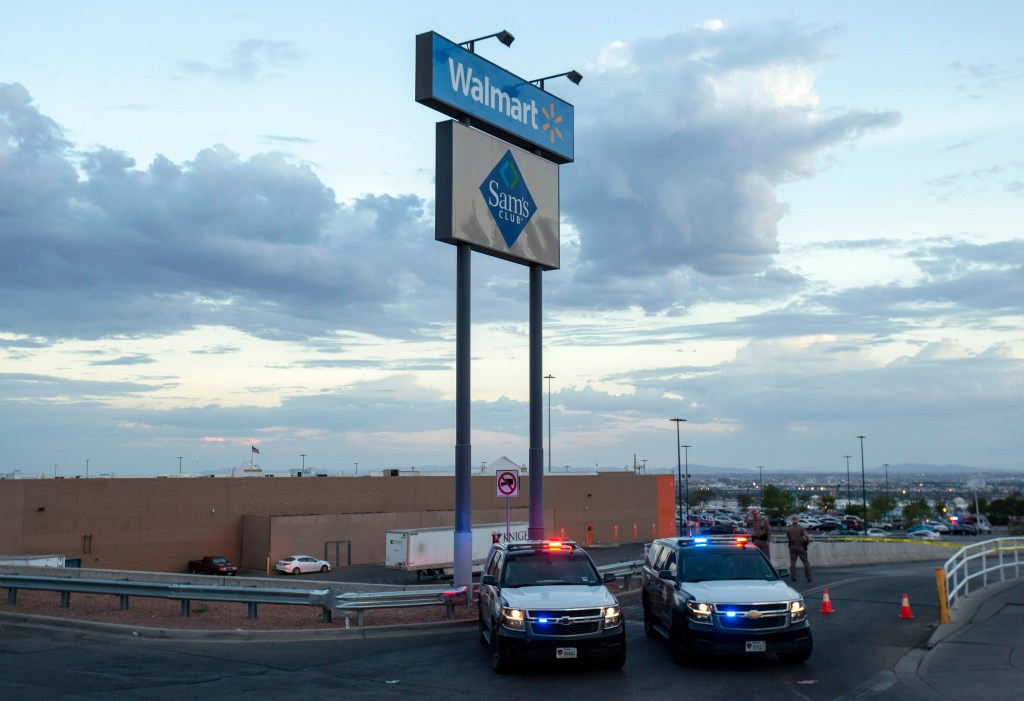 Texas state police cars block the access to the Walmart store in the aftermath of a mass shooting in El Paso, Tex.  Andres Leighton/AP/Shutterstock

Over the years, Walmart has tempered its policies on gun sales. Last year, in response to the Marjory Stoneman Douglas High School shooting in Parkland, Fla., it issued a statement announcing a new age requirement and restating past initiatives. “In light of recent events, we’ve taken an opportunity to review our policy on firearm sales,” it read. “Going forward, we are raising the age restriction for purchase of firearms and ammunition to 21 years of age. We will update our processes as quickly as possible to implement this change.”

The statement went on to remind that Walmart ceased selling “modern sporting rifles, including the AR-15” (read: semi-automatic) in 2015, and that it doesn’t sell handguns “except in Alaska where we feel we should continue to offer them to our customers,” though the reason for the one-state exception is not spelled out.

Apparently, the pulling of the AR-15 means that guns currently sold at Walmart can’t kill nine people in one minute, as happened in Dayton — for those into chilling symbolism, that’s about 6.66 seconds for each life — and that’s a good thing. But for whatever reasons Walmart’s gun shoppers buy guns, they’re buying guns at a giant, all-purpose global retailer right along with toothpaste, a school backpack, green beans. The purchase may not be as casual — it definitely is not, as the 2018 statement spells out — but the store setting is, one-stop shopping for products addressing all consumer needs from dental hygiene to killing ducks.

Whatever one thinks of the Second Amendment (what will it take for there to be serious consideration of its repeal?), what sane person thinks there should be anything casual about buying a gun, including the retail venue?

We all have a vote, we all have a voice. Thank God, on this matter, unified outrage is growing, and most Americans agree on greater restrictions on gun purchases, including universal background checks. Still, for most of us, our voices resonate only so far; even across social media, most opinionated people preach to the same choirs in which they sing. Not so, the rich and powerful. Walmart is a behemoth. An economic and cultural behemoth that services customers across demographics. All kinds of people shop at Walmart — all ages, ethnicities, political persuasions, income levels — perhaps not with equal frequency or in search of the same merch, but a huge range of consumers shop at Walmart for something. Most would likely pay attention to a major outward-facing initiative such as pulling guns from its shelves. Most customers would likely applaud the move, including the sane gun shoppers who use guns for legitimate purposes, and would be willing to go and buy their wares elsewhere.

As for the offended lunatic fringe, they’d likely do their staple shopping at Walmart anyway. Or on Amazon, which doesn’t sell firearms but registers on the hypocrisy scale with plenty of air guns and gun accessories. Where else offers so much to so many at such good prices?

But even if the lunatic fringe abandoned Walmart in droves, it is a huge, rich organization that can afford that kind of hit. How much money is enough, and how many lives are too many, to keep catering to what is essentially — by the retailer’s own admission — a relatively small contingent of gun buyers? 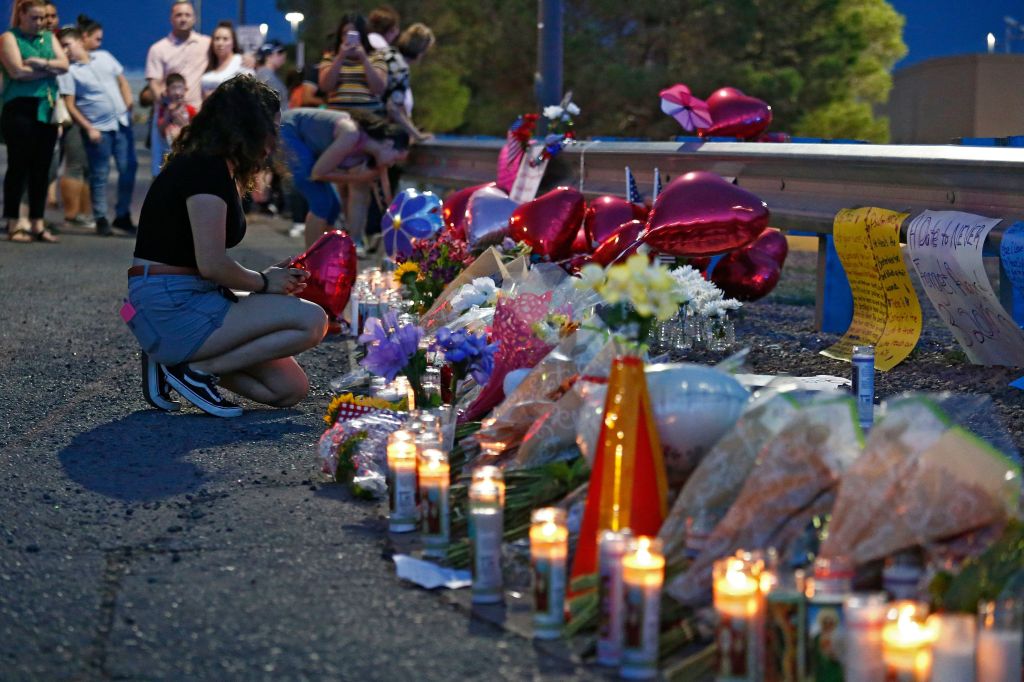 A woman kneels at a make shift memorial at the site of a mass shooting at a Walmart in El Paso, Tex.  LARRY W SMITH/EPA-EFE/Shutterstock

Taking a stand when there’s something to lose — isn’t that what true leadership is about? In June, Walmart announced what it called “a new approach to community engagement,” the first step a $24 million fund to be distributed across all of its U.S. stores with the goal of engaging  “associates and customers in supporting their communities with philanthropic endeavors of their choosing.

See Also: Girl Power in the Canyon of Heroes

“We believe it’s a competitive advantage for us to support our communities while we provide convenient access to affordable, healthier food, good jobs, disaster relief and support for local causes our customers and associates care about,” the statement read.

In El Paso and across the country, customers, retail associates and other decent human beings care passionately about freedom from fear of hate-fueled, murderous assault, just as they care about respecting and celebrating the multicultural diversity many of us were taught as children is a bedrock of American society. Could there be a stronger, braver expression of support for one of its own local communities — the Hispanic employees and shoppers who make the El Paso store succeed — and by extension, the ideal of melting-pot American culture, than for Walmart to walk away from guns, right now, today?

As for the Senate, their posteriors should be in their chamber seats today, voting on the H.R. 8, the Bipartisan Background Checks Act of 2019, passed by the House of Representatives earlier this year. Every senator should be forced immediately, with these horrific events raw and real in everyone’s individual psyche and in the national psyche, to stand up and say “Yes” or “No.” If Mitch McConnell is too fearful to call an emergency session, the news media with access should stalk every senator for an answer: “If the vote were today, which way would I go?” A hedge means “No.” A “No” is a vote for lunacy.