For Elizabeth Kiester, the decision to abandon her posh New York life for the dusty streets of Southeast Asia began with that classic dilemma: nothing to wear. 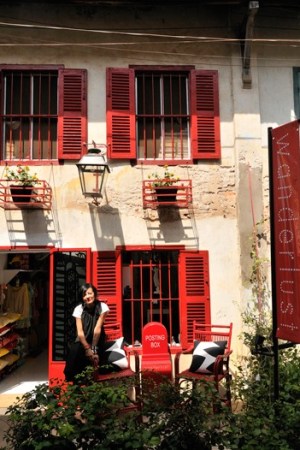 For Elizabeth Kiester, the decision to abandon her posh New York life for the dusty streets of Southeast Asia began with that classic dilemma — nothing to wear. In April 2008, the 43-year-old Kiester found herself in Siem Reap, Cambodia, on the eve of the Khmer New Year. Because she was on a volunteer trip, she had only jeans and T-shirts in her suitcase — nothing that would cut it for the party to which she’d been invited. “I couldn’t find anything [on the streets],” recalls Kiester, then the global creative director at LeSportsac. “But in the same breath, looking around and seeing that there were a lot of girls that looked just like me, both Westerners and the women working for NGOs [nongovernmental organizations] or in the hospitality sector, I thought, ‘Where the hell do they buy anything?’” The idea for Wanderlust, Kiester’s five-month-old boutique in Siem Reap, was born.

This story first appeared in the March 12, 2009 issue of WWD. Subscribe Today.

“I thought, I could be the first to do this here,” says Kiester, who spent last summer renovating the 1929 French Colonial building that is now home to Wanderlust, and one flight up, to Kiester herself. While opening a shop right outside a major tourist attraction (UNESCO World Heritage site Angkor Wat is in Siem Reap) might seem a bizarre move for a dyed-in-the-wool fashion person, Kiester says it was precisely her time in the industry that sped her decision. After 10 years as a fashion editor at glossies including Mademoiselle, Marie Claire, Jane and YM (as the fashion director) — Kiester went corporate in 2004, first as the global concept director at Abercrombie & Fitch Co. and then as the chief creative at LeSportsac, where she introduced the ongoing Artist-in-Residence line and the successful Stella McCartney for LeSportsac collection. At that point in her career, she needed a new challenge.

The other factor was her immediate fondness for Siem Reap, once the artistic hub of Southeast Asia and a region whose devastation by the Khmer Rouge ended only 10 years ago. “It sounds hokey, but it’s sort of a magical place in that it’s rooted in this creative history,” Kiester notes. “I thought, ‘There is still that undercurrent here, and it’s just about to take off and I want to be a part of that parade.’” That there were already five-star hotels like the Raffles Grand Hotel d’Angkor, world-class restaurants and even a burgeoning gallery scene made for perfect timing. Wanderlust opened its bright red doors in October 2008 with a garden party and a blessing ceremony officiated by Buddhist monks.

With her store, Kiester’s aim is twofold: first, to provide buy-now, wear-now fashion that “speaks a global design language,” and second, to support the Khmer people and stimulate local economic and industrial growth. And so, instead of stocking her shelves with imported Western, or even Asian, goods, Kiester designs everything herself and employs six local seamstresses to produce her $50 cotton djellaba-style dresses in bright colors and prints, racer-back camisoles, and other artisans to make leather flip-flops and chunky jewelry. Children from a nearby orphanage create her $1 “Wanderlust”-embroidered bracelets and hand-painted postcards (and receive all proceeds), and several other nonprofits provide her with T-shirts, beaded necklaces and recycled-newspaper shopping bags. Out of everything, though, Kiester admits, “the majority of my business is on dresses, because you throw it on, you put on a pair of flip-flops and you’re done.”

Kiester has also connected with local aid organizations like the Coalition for Financial Independence, an NGO that works with communities to build sustainable, globally relevant businesses. In doing so, Kiester has become an important piece of a larger puzzle — how to get Khmer products like handicrafts to “the people with a deeper pocket,” according to Pierre H. Mainguy, CFI’s executive director. “Elizabeth was fortunate to travel the world, experience different things and tastes and truly fathom the Western markets because she was working for corporations,” explains Mainguy. “She can bring tremendous value added and help different communities [here] better communicate their products to Westerners.”

So far, Kiester, who is completely self-financed, has managed to keep her expenses low and the sourcing and production of her products entirely local. Moving forward, she hopes her global fashion savvy and the store’s philanthropic bent will translate into success with her tricky customer base — a mix of ex-pats, backpackers, adventure-seekers and locals — and allow her to weather the bad economy, and perhaps even expand to other cities. “I am in a good position to test things, to try something new and cut it in a few different fabrics and see how it sells,” she says, noting she’s begun to cut her dresses “on the long side” and sell matching leggings for the women who work in Siem Reap’s clinics and schools.

Though she often has “Lost in Translation” moments — her part-time gig teaching English to a group of monks furnishes her with plenty of these — Kiester thinks she made the right decision to leave New York and her fashionable life there. “Of course, do I miss sitting front-row at Marc Jacobs? Yes!” says Kiester, adding bagels and “sometimes the snow” to the list. However, she tries to look only at the pluses. “I have luxuries here, too, but just in a different context,” she says, offering, as befits a Manhattanite, a real estate analogy. “I live in a French Colonial house! Something you would admire and go crazy for if you saw it on Bleecker Street. But mine is on an alley in Siem Reap, Cambodia.”