Sobriety and the threat of war may be consuming the world, but not the fashion fantasyland inhabited by some designers. Both John Galliano and Christian Lacroix, who thrive on over-the-top exuberance, delivered plenty of it in their fall... 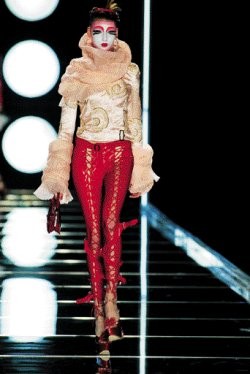 Sobriety and the threat of war may be consuming the world, but not the fashion fantasyland inhabited by some designers. Both John Galliano and Christian Lacroix, who thrive on over-the-top exuberance, delivered plenty of it in their fall collections.

For the Christian Dior collection he showed on Thursday, John Galliano turned up in madcap, masterful form, drawing from his recent haute couture, but scaling back the volume without losing a bit of the thrill.

Unlike Milan, where designers steered clear of politics on the runway, Paris is breaking up into camps — the sober sorts, and the live-large-you-never-know set. Guess where Galliano falls? But then, his stance isn’t all about the big picture of finding joy in an uncertain world, because chez Dior, there is bona fide reason to celebrate. The house’s just-released numbers speak for themselves. And the clothes, well, Galliano’s clothes shout with glee.

Think “Matrix” on the world’s most delightful uppers, and you’ve got the idea. Galliano had Pat McGrath reprise her Leigh Bowery-cum-kabuki-cum-Pierrot makeup, while Orlando Pita used rows of giant clips to fasten the hair tight to the head. Galliano then unleashed his legions in a bounty of flamboyant, sexy, girly-girl clothes — vibrant, voluptuous, fluffy — perfect for the vamp on patrol. She will go ga-ga over gorgeous frilled jackets, Asiatic prints, micro here, languid there, abundance over sleek, and a lilac fur coat that puts this worst of New York winters in a happy new light.

Now about that rubber — and Galliano showed more than a Firestone catalog — why not? Who ever said a chi-chi type and her tough-girl sister can’t do the old collegiate swap once in a while? Especially when they’re both skinny enough to pour into pants with open-air lacing down the front? And why shouldn’t a pair of platforms do double duty with bondage ’n’ bows? Talk about practicality — it’s almost two for the price of one!

Of course, rubber won’t fuel this year’s numbers, and no one knows that better than Galliano. You can bet that the Dior showroom and stores will have all of the requisite trimmings to make this collection work for the customer. Still, few pieces in this collection were pointless beyond the runway. Sure, there were biker pants and a see-through condom skirt, but Galliano also made a daring statement with gorgeous, immaculately cut and draped clothes — the white Betty Grable pinup dress, for example — that just happened to be in rubber. The message from John: “I can take anything and make it chic. Just watch me.” We do, and we’re mesmerized.

Christian Lacroix: Although he presented only 17 looks at his couture salon on Wednesday, Christian Lacroix made every one count. And what an action-packed jubilee it was. Lacroix’s are good-time clothes, created via some very serious workmanship. Decorated jackets, some made with miniskirts to match, were exuberant and then some, covered with sequins, paillettes, leather dots, strips of lace and cloth corsages bigger than bouquets. A faded black denim jacket came with lace-covered silver buttons marching down the sleeves, for example, and a magenta blazer bursting at the lapels with stiff ruffles.

If inspiration came from anywhere, save Lacroix’s own kooky imagination, it was the swinging Twenties. In fact, a layered flapper dress in gold was one part Lacroix and one part vintage, while other looks culled from his ready-to-wear, jeans line and Bazar merely mimicked the spirit of the times. But then Lacroix knows better than almost anyone how to whip up clothes that exude a little joie de vivre. This collection was stitched-up Prozac.