Warming Up to CFDA Awards

NEW YORK — "For the ones who don't win, use the frustration as fuel. There's no success without frustration," Diane von Furstenberg said at Wednesday's Swarovski luncheon to celebrate the Council of Fashion Designers of America's Fashion Award... 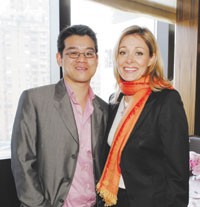 NEW YORK — “For the ones who don’t win, use the frustration as fuel. There’s no success without frustration,” Diane von Furstenberg said at Wednesday’s Swarovski luncheon to celebrate the Council of Fashion Designers of America’s Fashion Award nominees and honorees.

Von Furstenberg should know — she has been a fashion fixture for three decades and is to receive the CFDA Lifetime Achievement Award. The event, to be held at the New York Public Library on June 6, is underwritten by Swarovski, and the luncheon at Per Se, a warm-up of sorts, was hosted by Nadja Swarovski, a vice president of the crystal maker, and Peter Arnold, CFDA’s executive director.

“This is the fun part when you get to come out. I have never been to this building,” Derek Lam said, referring to the Time Warner AOL Center.

Lam, Som, and Behnaz Sarafpour have been nominated for Swarovski’s Perry Ellis Award for ready-to-wear. The winner in each category will receive financial support and product from Swarovski.

“The great thing this year is that Derek, Behnaz and Peter have all been nominated before, which just proves that they’re not flashes in the pan,” Arnold said. “That’s encouraging. There used to be a time the Perry Ellis Award was the kiss of death because you got all this instant attention that many young designers weren’t ready for. But this new guard is on a different path.”

Jack McCollough and Lazaro Hernandez of Proenza Schouler sneaked away from their showroom, where they are busy getting their spring collection off the ground. “It’s nice to take a break, and to have some good food,” McCollough gushed.

Before guests lunched on Belgian endive cuite sous vide topped by a poached quail egg, a Nova Scotia lobster pancake with peas and carrots and chocolate brownies and sorbet for dessert, von Furstenberg went on in her brief speech to recall a poem she studied in school about a squirrel and a nut that ended with the word experience. She didn’t know what the word meant, but according to her teacher, it was something a mother had, and that one acquired at 30. “But my mother’s 27,” she remembered retorting.