The Warnaco Group Inc. is on the prowl for new acquisitions and is said to be eyeing two West Coast firms: Ocean Pacific and Apparel Ventures. 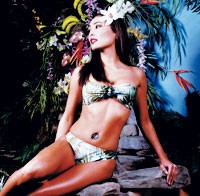 NEW YORK — The Warnaco Group Inc. is on the prowl for acquisitions and is eyeing a handful of firms, including Ocean Pacific and Apparel Ventures.

Warnaco said it intends to make acquisitions in the swimwear category, and deals with the two West Coast firms might not happen. However, financial sources on both coasts said discussions with Op and Apparel Ventures seem to be in a more advanced stage. Other competing swimwear firms looking for a buyer have contacted Warnaco, as well, but those talks were classified as either “feelers” or “preliminary negotiations.”

As reported, Warnaco executives said at a Piper Jaffray conference in New York in early June that it was kicking into gear a growth strategy that includes acquisitions.

Warnaco spokeswoman Deborah Abraham said, “We do not comment on rumors and speculation.”

Richard Baker, chief executive officer of Op, and other executives at the company, could not be reached for comment.

For Warnaco, opportunities such as Op and Apparel Ventures would be welcomed by Wall Street. “Firms in the apparel industry need to make their stock move and the only way, since the sector is not growing rapidly, that they can increase market share is through acquisitions. It is a quick way to grow, and speed definitely counts,” one investment banker said.

A financial adviser specializing in mergers and acquisitions observed, “It makes sense for Warnaco to do an acquisition now. The company has a new management team and a new balance sheet. Wall Street will encourage Warnaco to make acquisitions so long as it doesn’t go too far afield. Because swimwear is one area where it has a presence, these are deals Wall Street will tolerate.”

Op has been marketed a number of times over the years, but this latest try might be the charm. Unlike in the past when the business was struggling, the company is hitting its stride on all fronts.

Gilbert Harrison, chairman of Financo Inc., said, “Dick [Baker] is an extremely talented merchant and has done an extensive and great job in developing Op and taking it back from bankruptcy.”

Baker and his partners at the San Francisco-based investment group Doyle & Boissiere acquired Op from Berkeley International Capital Corp. in 1998. It is now a thriving force with 35 licenses in 83 countries. The company’s annual wholesale volume is in the $250 million range and it has annual licensing royalty of around $18 million.

One East Coast financial contact said, “Op’s responsibility is in promoting the brand. Whatever royalties it takes in is pure profit. With its wholesale and licensing figures, the purchase price should be in the $45 million to $65 million range.”

The contact said Warnaco could decide Op was worth the price because the “brand would be owned in total” by the apparel giant. That ownership would give Warnaco many options on how to expand the brand, whether through line extensions or even just by taking some of the licenses in-house to reap all of the profits.

Warnaco said several industry observers could easily take the brand and extend it to the intimates category.

Op is considered a lifestyle brand and works closely with its licensees. One area, Op juniors’, grew 40 percent in 2002. Distribution is at midtier channels such as Kohl’s, May Co. and Federated stores.

Op Classic, the company’s retro fashion brand, spawned the birth of Seven2, a take on 1972, the year when three surfer friends founded the brand. Seven2 is also a lifestyle concept launched last year, but is more fashion-driven, and that seems so far to be a hit among cool specialty shop consumers from Japan to London. First-year sales are expected to be in the $15 million range.

The swimwear market is about $3.1 billion at retail, and one of the bigger players is Apparel Ventures.

The Los Angeles-based firm has most of its production in China, but keeps the manufacture of its trendier lines local. An industry executive in L.A. observed, “The La Blanca line, which Apparel Ventures does, is a leading name brand out here. It is a big seller.”

She added, “Swimwear is such a special category that the only deals that can be done are with big firms, and there is only a handful of names that qualify. Warnaco is one of them.”

Apparel Ventures does about $90 million in annual sales, but sales were much higher only about two to three years ago. Financial sources said earnings before interest, taxes, depreciation and amortization were more than $10 million in 2000, but slid to far less than that last year.

He added that Apparel Ventures has good name brands under its umbrella, and one key attraction is the Ralph Lauren swimwear lines.