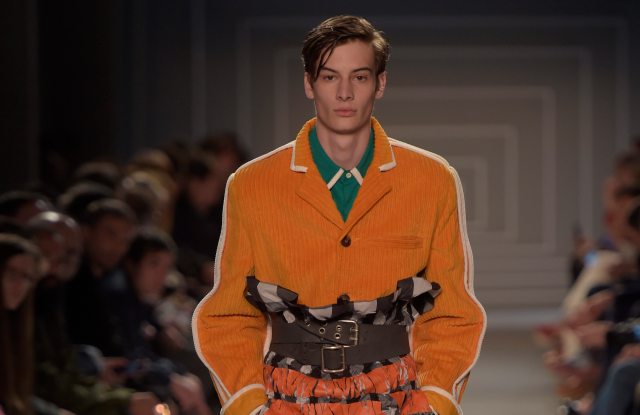 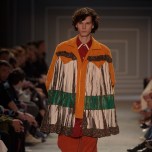 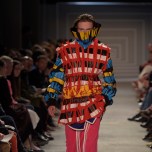 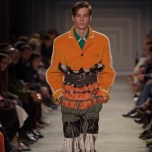 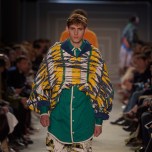 HYÈRES, France — Wataru Tominaga has won the Première Vision Grand Prize at the 31th edition of the Hyères International Festival of Fashion and Photography.

“He’s my favorite,” said designer Jean-Paul Lespagnard, a winner of the 2008 Hyères competition. “The choice of materials and colors is bold and ambitious. I was very impressed by the ‘wow’ effect of his clothes at the show. It’s pure joy.”

“I want to have a bit more fantasy in clothes, especially in men’s wear,” Tominaga explained, adding he’s inspired by designers ranging from Madame Grès to the German brand Bless.

The Hyères festival has been a springboard for designers such as Viktor & Rolf and Anthony Vaccarello. “It’s a great opportunity to meet many people. I want to find a job in men’s wear, something playful. I like Bernhard Willhelm, Walter Van Beirendonck and Craig Green,” Tominaga said.

He was one of 10 international designers competing for the prize, valued at 15,000 euros, or $16,829 at current exchange, a list that was whittled down from around 300 applicants. He is also awarded the chance to work with the specialty ateliers that Chanel controls through its Paraffection subsidiary, a prize also valued at 15,000 euros.

Chloé, a major partner of the festival for the past five years, awarded 15,000 euros to Finnish duo Hanne Jurmu and Anton Vartiainen.

Jurmu and Vartiainen, respectively 26 and 23, who are students at Helsinki’s Aalto University, also received a jury’s special mention.

Vendula Knopova from Czech Republic won the Grand Prize of Photography, whose jury was presided over by William Klein. Jean-Paul Goude was also on jury duty.

Highlights of the four-day festival included a master class with Dossena; a round table on digital and one on sustainability with speakers included Carlo Capasa, president of the Italian Chamber of Fashion, and Marie-Claire Daveu, Kering’s chief sustainability officer; dinners hosted by Chanel, Petit Bateau and French fashion’s governing body, and a bash at Hyères’ racetrack cohosted by Paco Rabanne, i-D magazine and Cicciolina.