Weak Dollar a Worry for Europe

NEW YORK — While bright colors and florals were the rage at European Preview, there was a lot of talk about green, specifically the weakened position of the U.S. greenback.

Mill executives said they were handling the weak dollar —... 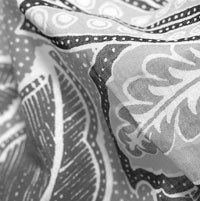 NEW YORK — While bright colors and florals were the rage at European Preview, there was a lot of talk about green, specifically the weakened position of the U.S. greenback.

Mill executives said they were handling the weak dollar — which has the effect of making their products seem comparatively more expensive in the U.S. — by lowering their margins and raising prices, or in many cases both. Many mills aimed to offset the problems caused by the weak dollar by stepping up their focus on innovation and creativity.

European Preview, which offers a first look at some of the fabrics that will be shown at the influential Première Vision show in Paris, ran Jan. 21-22 at the Metropolitan Pavilion, 125 West 18th Street, here.

According to the show’s organizers, about half of the people who attend the show also go to Première Vision. This year’s event featured 123 European weavers and nearly 2,600 attendees.

Among the exhibitors, Monica Belardinelli, sales manager for the Italian mill Crespi, said, “The weak dollar, of course, is a great concern for us.”

The firm is still considering what to do with its price list, but is planning on finding some sort of compromise, she said.

Belardinelli was selling yarn-dyed linen and cotton as well as fabrics made from some natural fibers new to the firm such as bamboo and hemp.

Jorge Martinez, a sales representative for Tavex USA, Inc. —part of Tavex Algodonera, which has mills in Europe and Mexico — said the combination of the weak dollar and high cotton prices is making for a double hit.

“We’re absorbing the market conditions as well as we can,” he said, adding there was really no other choice.

“It would be very difficult and complicated to try to grow and raise prices,” he said. “We are investing in the future.”

Tavex is also investing in research and development as a way of competing with low-priced goods from China. One development is gray denim, as well as special treatments.

Being ahead of fashion trends is key, said Martinez: “Eventually, being ahead will allow you to do larger volumes when it becomes big. You need to believe in something, you need to invest in it.”

Despite the dark cloud of the weak dollar, Gera Gallico, president of Billon USA Inc., a division of Billon Freres, which is based in Lyon, France, said sales and traffic were almost as good as they had been a year ago.

The currency issue, which has caused the firm to raise its prices by 7 to 10 percent, “Is a problem we all need to face,” she said. “This is where the relationship a salesperson develops with buyers becomes an absolute must.”

Gilles Amsallem, sales director for Marc Rozier, a Lyon-based mill, asserted business was strong at the show despite the weak dollar because of the firm’s creative product.

“Our prints are always unusual, our fabric is always unusual,” he said, adding that creativity was the firm’s best weapon against goods from China that have been improving technically.

“Every season we are being more creative,” he said. “That’s the only way [the mills] can survive.”

Daniel Faure, president of Premiére Vision, asserted, “Creativity is much more important than price and I think exhibitors know that. It’s important for them to create interesting things for the buyers, things that are neither too basic nor too classic.”

A major trend at the show was pretty and feminine looks that included an abundance of floral prints, many on floaty chiffon, and spring tweeds in cotton blends. In addition, color was a key topic: bright shades of pink, orange, yellow, blue, red and green dominated at many booths.

“Strong color will continue for the spring season,” said Rozier’s Amsallem. “It makes sense after such a colorful fall.”

The mill showed a range of both jacquard and printed looks in bright orange and red, two of the key colors at the show.

The overall feeling was also more polished than in past seasons.

“There’s a move away from the casual cargo look, which is great to see,” said Sarah Hough, senior vice president of women’s at Club Monaco. “The season is more about a cleaner, ladylike look, which I find refreshing.”

“There is a welcome lightness and brightness to the season, which feels trend right,” said Oona McSweeney, fashion director of women’s ready-to-wear at Federated Merchandising Group. “Fresh color is a strong message, particularly anything in yellow.”

“There was a lot more color than I expected,” added Jerry Delova, design director at Barry Bricken, “and customers are clamoring for it, so it was great to see…What struck me the most were that mills that usually don’t show color had lots of it.”

He also said he was interested by looks that fit into his “dirty preppy” theme for the season.

“It’s preppy but it’s a little off,” he explained. A group of Hawaiian prints that were Lilly Pulitzer-inspired, for instance, were featured on nontraditional sheer cloths such as cotton lawn, voile and batiste. “The florals looked new on these different grounds,” he said.

“In terms of color, contrast is key, whether it’s a lighter color against a darker tone or a bright color on a white ground,” said Patrick Szczepkowski, head of North American operations for Bianchini Férier.

At Komar, the vintage selection of florals garnered a lot of attention. A group of feminine rose prints were recently recolored by the mill. “It’s good to go back, but you have to keep with the current trends,” said Fredda Bates, who works in sales at the mill.

For Susanna Moyer, head designer at Liz Lange, the selection of prints at the show was “upbeat and happy.” Many of the Pucci- and Lilly Pulitzer-inspired prints were well-suited, she said, for setting the mood for the season. “The colors are so bright and happy — we loved all the bright oranges, pinks, turquoises, yellows and especially Kelly green, it’s a great color that hasn’t been around in a while so we’re excited to use it.”

Also on tap for the spring season were an array of tweed looks, mostly featured in chunky cotton blends. Weisbrod Zürrer showed a white cotton and acetate blend accented with colorful threads, and Jules Tournier offered cotton and silk, as well as rayon and linen blends. Clarenson showed a bright-hued selection of tweeds, some of which included touches of silver metallic.

Luigi Boggio Casero’s tweeds were more discreet, but featured stronger colors. “We were inspired by an island feel,” said Marco Melchisedecco, sales director. Looks there included a frosty pink and beige combination with a high-low effect, as well as a bright apple green tweed in silk, rayon and cotton.

In knits, jerseys were exceptionally soft, thanks to new washes and finishes. Marioboselli showed rayon blends and cotton blends. “Everything is very soft and comfortable but not so casual,” said Stefano Cima Vivarelli, export manager for the U.S. and U.K. for Marioboselli.

Also among those shopping at the show was Kristinn Sigridarson, a designer at Anne Klein.

“It’s extraordinarily colorful, which is probably good,” she said. However, he added, “I like them a little bit creamier, dustier than what I’ve seen.

“This is a good starting point,” said Sigridarson, referring to European Preview. “When I go to Paris, that, to me, tells me what the season will look like more than anything else.”

He added: “We’ve been in such a casual cycle that we feel we want to be a little more dressed up, refined, chicer.”

Christine Standal, manager of textile research and development at Liz Claiborne Inc., also pointed out the importance of bright and bold colors.

“Color is very important for spring 2005,” she said. “I would say we’re at the peak of bright, bold colors.” All the color, she said, has also helped give the show “a lot of buzz and excitement.”

So does she have a favorite? “I’m partial to pink. It’s one of the hottest colors right now.”

It wasn’t just colors that are trending toward the bold, though. She cited the importance of bold floral prints, multicolor stripes and Madras plaid.

Standal was also seeing “cleaner fabrics, not as distressed or as washed as last year” as well as natural fibers that have a homespun look.