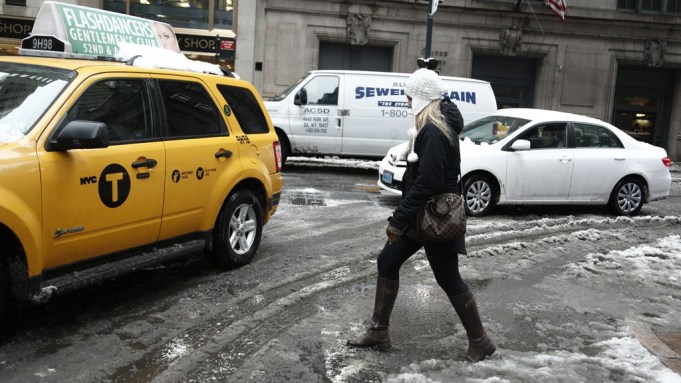 NEW YORK — New York City appears to have averted a major winter snowstorm that was threatening to hit the East Coast Sunday. Instead, the weather forecast for the weekend calls for a partly cloudy day Saturday, snow showers on Sunday and a sunny day Monday.

The changed forecast caused designers and others to breathe a sigh of relief. On Wednesday, show organizers said they were keeping a close eye on the weather situation, as New York Fashion Week got under way.

“The safety of all attending and participating in Mercedes-Benz Fashion Week is our top priority, and after careful review of weather conditions with city officials and the CFDA, we plan to move forward with all shows as scheduled. We will continue to evaluate new developments in partnership with city officials and the CFDA,” said a spokesman for IMG Fashion, which owns MBFW.

“All shows and presentations will go on as planned. If the weather report changes and a catastrophic storm is imminent, then Made will reevaluate,” said a Made spokesman.

Steven Kolb, chief executive officer of the Council of Fashion Designers of America, said contingency plans are up to the individual venues, Milk — organizer of Made — and IMG Fashion. “It’s up to Milk, IMG and each individual designer to call it. We’ll track the weather and we’ll communicate anything we know about the storm. We’ll put any messaging on cfda.com,” said Kolb. He said the CFDA will also use its Twitter and Facebook page to communicate any weather and show information. “We’ll track it and monitor it and we’ll be in touch with the city, as well as get recommendations from them,” said Kolb.

On Wednesday, a snowy, icy, slushy, rainy mess descended on the region, causing the cancellation of numerous flights into the area and a few sparsely attended shows early in the day. Later in the afternoon, however, things returned to relative normality, with the city mainly getting rain and the major hassle simply jumping the pond-size puddles that had formed at street corners.

Heather Shimokawa of Vanity Fair was one of the few editors to make it to the DKNY Men’s presentation Wednesday morning. She said she was going to try her best to attend the shows on Wednesday, but she has a young child and many subway lines were down, so “brands need to manage their expectations.”

Also at DKNY, Nick Sullivan from Esquire said the snow is a challenge, but it pales in comparison to the far-flung locations of all the shows. “But part of our job is to know what gear to wear to fight the elements.”
At DKNY, men’s designer Garry Martin was unable to fly to New York from London, leaving p.r. people to walk editors through the men’s collection.

The pace of traffic at this week’s fall-holiday innerwear market was sporadic, but the majority of out-of-town retailers either showed up at appointments or moved up times and dates. Innerwear manufacturers said a number of retailers arrived on Sunday and dodged transportation issues on Monday and Wednesday due to the snowstorms. Appointments with major stores based in the Northeast such as Bloomingdale’s had to be switched around, said vendors.

“Some executives like Ron Frasch couldn’t make the show because he was stuck in his driveway with the snow,” said Natori. “But Bill Dillard [3rd] was there for my show and it was his very first fashion show.”
Dillard, who was later seen at the Natori showroom, said his flight Monday from Little Rock, Ark., was scheduled at 10:30 a.m., but he only arrived in New York at 10 p.m. that evening due to cancellations. Regarding market appointments, Dillard said: “I’m kind of squishing them all up, shortening the times, telling people you all will have to come to Little Rock, or rescheduling next week…. I’m sure the weather is impacting retailers.”

Deborah Hughes, owner of Deborah Hughes Inc., which is doing front of the house for five shows during fashion week, was busy reshuffling seating arrangements on Wednesday. “People’s flights are being canceled, and we get the seating charts done and we have to change them,” she said Wednesday. She added that she’s hearing from editors from Europe and across the country. “A lot of people are stuck down in the South too, and I have staff stuck in California,” she said. Those that are in New York will make it there. “We’re all so hard-core,” she said.