With her on-again-off-again engagements, Jennifer Lopez has been the bride to watch since she married dancer Cris Judd three years ago. After the couple split, she dated actor Ben Affleck, who gave her a 6.1-carat pink diamond engagement ring from... 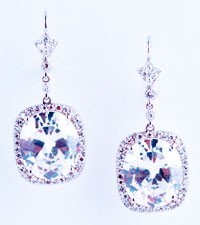 With her on-again-off-again engagements, Jennifer Lopez has been the bride to watch since she married dancer Cris Judd three years ago. After the couple split, she dated actor Ben Affleck, who gave her a 6.1-carat pink diamond engagement ring from Harry Winston in 2002. Every paparazzi shot of her that appeared in magazines thereafter included a close-up of the ring, sparking a trend in the jewelry market for pink diamonds that lasted longer than the engagement. Lopez and Affleck broke up in December and early last summer, Lopez wed Latin singer Marc Anthony in a decidedly undercover ceremony.

But it didn’t take long for details to leak out, such as the fact that Lopez wore approximately $7 million worth of jewelry from designer Neil Lane. “Jennifer’s jewelry was probably the most spectacular, most jeweled, most glamorous I’ve ever done for a wedding,” said Lane, who’s worked with his fair share of Hollywood stars.

Her necklace alone, he said, was “a couple hundred carats” of diamonds, 50 of which were in the major collar piece that featured a 10-carat stone placed in the center and five-carat stones on each side graduating down in size. Lopez was fully loaded, wearing diamond bracelets, drop earrings and hairpins. “It didn’t look over the top,” Lane insisted. “It was gorgeous and it suited her style.”

Considering just four years ago, Lopez’s position as a fashion fixture was established by a plunging Versace jungle-print dress and her skills with double-sided tape, Lane’s observation of her relatively classic style choices represents a departure from daring diva to a subtler fashion icon.

As it turns out, the bridal jewelry preferences of bling queens in the hip-hop and urban community are not so different from ladies in every walk of life. They want to look beautiful, foremost, and to achieve that, they opt for more classic designs. Heart-shaped diamonds are popular for engagement rings and pink stones pop up every now and again, but that’s as far into fashion as the trends go, jewelers said.

The bridal jewelry industry rakes in $9 billion annually, and bridal collections account for 35 percent of jewelers’ businesses, according to the Fairchild Bridal InfoBank which, like WWD, is owned by Fairchild Publications Inc.

The category’s success is perhaps due to a greater visibility into the nuptials of the rich and famous who more often are willfully gracing covers of wedding magazines or not-so-willfully landing on the pages of supermarket tabloids.

A number of jewelers said celebrities are well aware of the differences between dressing for their professional lives as opposed to their personal ones. How a woman wants to look in a music video meant to be seen by millions of fans is much different than how she wants to look for a private ceremony in front of a few hundred people, and most importantly, the man she’s about to marry.

Jewelers who have catered to the hip-hop fabulous said women are opting for more conservative pieces, even if they are layering them. Jacob Arabo (universally referred to as Jacob the Jeweler) said his clients certainly buy heavy into carat weight — his average wedding ring has four to 12 carats of diamonds and can cost upwards of $2 million — but they’re not as concerned with looking fashionable or flashy. Tennis bracelets and necklaces are popular choices, he said, as well as small drop earrings. “They want to look strictly traditional,” Arabo noted, “yet beautiful.”

Russell Zelenetz, of Stephen Russell, outfitted singer Mary J. Blige for her low-key nuptials to music industry insider Kendu Isaacs last December. Zelenetz and his partner, Stephen Feuerman, specialize in lacy Thirties vintage looks mostly done in platinum that retail from $3,000 to $350,000. Blige chose lacy chandelier earrings and a bracelet for the ceremony, resulting in a look that was “large but not heavy,” Zelenetz said. “She was a little more reserved than when she entertains and wears bigger and louder things. A wedding is a little quieter.”

Still, there will always be the brides who want to be loud. And for that, jewelers, while still favoring the classic designs, increase the carat weight to as heavy as one’s bank account will allow.

“We sell eternity bands phenomenally, with big stones all the way around with a total of 12 carats,” said Sol Rafael, who counts rappers Eve and Lil’ Kim among his clients. His pieces range from $25,000 to $2 million. “Certain necklaces we have are simple and not very complicated, but we only do them with large stones, no small stones.”

A number of jewelers recommended a large pendant necklace for singer Beyoncé Knowles should she decide to marry her boyfriend Jay-Z.

“I’d love to see a heart shape on Beyoncé,” said Susan Rosen, who uses heart-shaped diamonds, often pink, and incorporates tendrils of platinum vines in her work. Her pieces range from $3,500 to more than $1 million. “I’d like to see a healthy heart shape with fat peaks,” she continued, “that full heart like a woman, not the supermodel heart-shape.”

Jeweler Chris Aire’s customers are in the bigger is better camp, too, he said. For the wife of rapper Dr. Dre, Aire designed a single, radiant-cut 10.43-carat diamond with a woven platinum double band.

“Among my clients,” he said, who include celebs like Will Smith and Jada Pinkett Smith and dozens of NBA players, “one of the things they’re buying are large center stones. Five carats is almost on the small side.”

The price tag, however, is not — some of Aire’s pieces can run from $6,000 to $500,000. So he and other jewelers are creating designs that give the dazzle, if not the carat weight, of bling.

“People who don’t want to spend that kind of money but want a lot of bling are buying wide bands [to create a similar statement],” he said.

Rudy “Freeze” Athouriste, who designs the Daed jewelry collection, approached the issue by creating large pendants and rings shaped like diamonds. Instead of one large cut stone, the pieces are encrusted with small stones. One bride chose the ring and pendant in platinum for her big day. Offered in rose or yellow gold and platinum, the pieces range from $1,000 to $3,200 retail; custom work can reach upwards of $54,000.

But leave it to Kimora Lee Simmons to turn the concept of bridal jewelry on its head and back into the realm of bling. As creative director of the Simmons Jewelry Co., she is planning to introduce a bridal collection featuring a new setting and diamond cut in 2005.

“I think a lot of bridal jewelry is so boring and too traditional for a lot of women today,” she said. “Why shouldn’t brides have wedding rings and bands that are fashionable and make a statement?”