Betsey Johnson moves to Betseyville…Limited Too is turning Sweet 16 and sponsoring a reality show airing Friday on ABC Family. 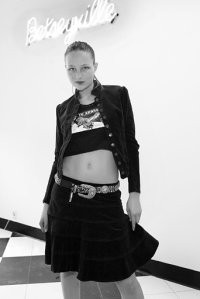 NEW YORK — With a new sportswear line and a home in Mexico to match, Betsey Johnson is getting used to a casual lifestyle.

After 40 years in the dress business, the designer is delving into a fresh way of dressing with Betseyville, a casual sportswear collection that includes jeans, T-shirts, skirts, jackets and other more casual pieces not seen from Johnson before. Highly influenced by rock ’n’ roll, Johnson said she has wanted to do a line like this for a long time, but chose to go ahead with it now, after lining up the right production team and factories to manufacture a collection of this size.

“This is the type of clothing that people are wearing these days,” she said by phone from a store in the small Mexican town of Zihuatanejo on the Pacific Coast, where she just bought a new home, which she has also named Betseyville. “My dress business is established and has become very occasion-based, so it was time to do something a little different.”

Johnson said when the samples came in she felt so confident in the Betseyville collection that she decided to dedicate her runway show last month to the new line, while mixing in a few pieces from her signature collection.

“What I loved about the last show was that the clothes were so real and wearable,” she said. “But they were also very creative and worthy of a show.”

The company plans to launch the first collection for fall retailing, but that will be a small line. The full launch is planned for spring.

Chantal Bacon, Johnson’s partner in the business, said retailers had been asking for a collection like this. The line’s wholesale range is between $17 for a T-shirt to $105 for a jacket. Bacon said she expects to reach between $5 million and $7 million in sales after the first year at retail and said that the Betseyville line is just another step in creating a lifestyle brand. Now, she is looking for licensing partners.

“We were always interested in licensing, but now we are really aggressively looking for partners so that we can launch items like lingerie and shoes,” she said.

The company tested a few key pieces of Betseyville (although not under that label) in the 42 signature freestanding stores. The collection will open to buyers at the end of this month.

Meanwhile, Johnson said she is taking a month off for the first time in her life. She is relaxing while gaining inspiration for her next line at Betseyville, where she said there are no Americans in sight. But she’s not relaxing too much because that’s not her style.

“I’m shopping for pillows, towels and pineapple,” she said. “This store is amazing. They sell everything here and no one speaks a word of English. They are all so friendly, though. I’m a long way from Seventh Avenue. It’s like a different planet. I can get really inspired here.”