The top-10 network television shows ranked by the number of product placements in 2006. 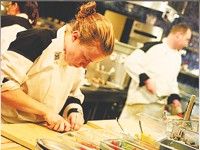 There isn’t a TV program or movie made these days without product placement. How effective is it? Nielsen Media Research found that this form of advertising boosts brand recognition by 20 percent when combined with a commercial. “Though product placement is common across all genres, reality shows in particular don’t have as much script writing, and producers have more control over how a product is integrated,” said Annie Touliatos, director of product development and marketing at Nielsen. One of the biggest product placers is Mark Burnett: TV Guide calls him “The godfather of American reality television and a pioneer of in-program product placement.” Burnett is the series creator and executive producer for seventh-ranked “The Apprentice,” and executive producer for “Rock Star: Supernova,” ranked number nine. Below, a look at Nielsen’s Top 10.

AMERICAN IDOL, FOX
Total number of product placement occurrences in 2006: 4,086
The judges sip their supersized Cokes, the contestants are driving around in Ford Mustangs, and the audience is text-messaging in its favorites of the week using Cingular cell phones. Past products have included Kellogg’s Pop-Tarts and Clairol hair care products. Despite the blatant use of product placement on the show, people just can’t stay away. In fact, an average of 42.9 million viewers tuned in to the final half-hour of the fifth season finale, when Taylor Hicks was announced as the 2006 American Idol this past spring. Yes, the spring: “American Idol” aired only between January and May of last year.

THE AMAZING RACE, CBS
Occurrences: 2,790
A test-drive challenge full of Mercedes-Benz cars, playing fields of Travelocity gnomes, flights on American Airlines, e-mails on AOL….These are just a few of the products that have been integrated into CBS’s Emmy-winning reality show. “The Amazing Race,” created in 2001, is literally a race around the world, where teams of two (or four, in the case of 2005’s Family Edition) compete in various challenges in a variety of locations. The series continues its run this spring, with an all-star version. According to Variety, expected racers returning to win the million dollars include: Rob and Amber — the reality-show addicts who fell in love when they met on “Survivor”; Kentucky coal miner David and his wife, Mary, a homemaker; and Joyce and Uchenna, winners of Season 7.

EXTREME MAKEOVER HOME EDITION, ABC
Occurrences: 2,701
The ABC show tugs at America’s heartstrings each week with its group of designers who build dream homes for needy families. And, naturally, the show oozes products for the home. For example, host Ty Pennington sends members of the design team (seen left are two of the members, Paige Dennis and Michael Moloney) to Sears each episode to shop for furniture, electronics and big-ticket items such as refrigerators and dishwashers. He also sends the needy family on vacation so the team can build the home (which is constructed by builders such as Howland Homes). Often, the family winds up at Walt Disney World following a flight on Southwest Airlines, as the product placement statistics show. Families will sometimes be given a Ford truck as a big surprise at the end of the episode.

THE BIGGEST LOSER, NBC
Occurrences: 2,405
It’s only fitting, so to speak, that the brands placed on this reality show, based on a group of people who spend the series losing weight and exercising, are fitness products. Starter Apparel, for example, is often featured, while Nautilus and Freemotion Fitness Exercise Equipment are shown at the “Losers'” gym. Contestants drink Penta Water and are trained by Bob Harper and Kim Lyons. Erik Chopin, the most recent winner (seen at left with Lyons and other contestants), began the competition weighing 407 pounds and weighed in at the finale at 193 pounds — a 52.6 percent drop. As Season 3’s “Biggest Loser,” Chopin won a $250,000 cash prize.

AMERICA’S NEXT TOP MODEL, UPN/CW
Occurrences: 2,309
Tyra Banks’ reality show really could be a season-long commercial for CoverGirl cosmetics. Airing Wednesdays on the new CW channel, this past season had plenty of products and brands on hand. Take, for instance, the winnings that are mentioned and seen each week during the show: a modeling contract with Elite Model Management, a cover and a six-page spread in Seventeen magazine and the $100,000 contract with CoverGirl. Standout contestants included the twins, Amanda and Michelle (who revealed she might be gay or bisexual), and Anchal, the voluptuous Indian model who lacked self-confidence and was knocked down at every possible moment by Melrose, the fierce competitor who made it to the number-two spot. But it was CariDee (seen left with Banks), the bubbly free spirit from North Dakota, who in the end became top model.

HELL’S KITCHEN, FOX
Occurrences: 1,909
This isn’t your ordinary cooking show. Just ask award-winning chef Gordon Ramsey, the surly, expletive-spewing host. The show features restaurateur hopefuls from different backgrounds competing in vigorous, pressure-filled food challenges to win top prize. This season, it was the coveted title of executive chef of a restaurant at the newly opened Red Rock Casino Resort and Spa in Las Vegas (a plug for Red Rock). Additional product placement for Season 2 included food-related names, such as Sysco Distributor and Freshpoint Food Distributor. But perhaps one of the biggest came from an apparel company, known as Chef Revival apparel (modeled at left by Season 2 winner Heather).

THE APPRENTICE, NBC
Occurrences: 1,831
With Donald Trump — the king of promotion (and self-promotion) — at its helm, it makes sense the show would find itself in the Top 10. Since its debut in 2004, several products have made their way into the hands of contestants. But 2006 specifically revealed brands such as Post Grape-Nuts Cereal (Trail Mix Crunch), Sam’s Club and Pontiac autos and trucks. The latest season of the show created by Mark Burnett (seen left with Trump) premiered Sunday and relocates it to L.A., where winning teams of each challenge stay in a luxurious mansion, while the losers sleep outside in tents. And Trump’s new sidekicks this season? His kids Ivanka and Donald Jr., who will be on-hand for several episodes as boardroom advisers.

THE KING OF QUEENS, CBS
Occurrences: 1,742
The only sitcom to break into the Top 10, the CBS half-hour show, starring Kevin James and Leah Remini, is currently in its ninth — and final — season. “This show has been consistent among the Top 10 for a while now,” said Annie Touliatos of Nielsen. “The set design allows for good product placement. They have many kitchen scenes and living-room scenes, which allow characters to wear casual clothing.” The show consistently has James’ character Doug lounging about the house wearing Nike apparel and shoes, as well as clothing from Under Armour apparel.

BIG BROTHER, CBS
Occurrences: 1,591
How hard can it be? The reality show centers around a house where contestants live and try to win by avoiding evictions at the hands of their housemates. The prize? $500,000. But winning the jackpot isn’t as easy as it seems. Residents are required to perform chores and tasks around the clock and be filmed by multiple Web cameras. Since the focus is on the house, apparel (such as Nike) is displayed among contestants’ clothing. And both Dolce Restaurant and Les Deux Hollywood Restaurant were featured this past season, along with NASCAR and Will Ferrell’s film “Talladega Nights.”