Many of today’s biggest fashion houses have been fiddling with price tags, but it’s stirring a sharp debate in the luxury market. 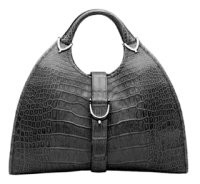 PARIS — If the designer fashion business were a game show, it would definitely be “The Price is Right.”

That’s because many of today’s biggest players have been fiddling with their tags, with some introducing accessibly priced items for so-called “aspirational” customers and others raising the bar with exclusive, hyper-expensive baubles.

This story first appeared in the March 27, 2003 issue of WWD. Subscribe Today.

All the changes are stirring sharp debate among retailers, manufacturers and industry consultants at a time when no one wants to confound already skittish consumers with sticker shock — or cheapen brands at a delicate time for luxury. The sector’s already trying situation has been made even more delicate by the war in Iraq, which has further eaten into global travel and caused many consumers to rein in their spending on anything but essentials.

Nonetheless, who would be the first contestant in fashion’s new game show? Tom Ford, come on down!

You might accuse the dashing Gucci Group creative director of a tendency to overbid — and you would be right. He took the Gucci brand into new price stratospheres last fall by introducing made-to-order handbags that run from $1,900 up to about $16,000.

The move was the wrong answer for the company at the time, and analysts even suggest the strategy dented Gucci’s leather goods sales.

Yet Ford defended the move up the price list. “We had planned something strategically, which I still believe was the right thing for the long-term value of the Gucci brand,” the designer argued. “But maybe given what’s happening in the short term, it was ill-timed. We were starting to lose the top-of-the-pyramid customer at Gucci and…we did something very calculated: We went back in with custom-made shoes, custom-made bags, things with more expensive skins, more expensive detailing, and we really lifted the price point of the collection.”

Gucci Group chief executive Domenico De Sole agreed. “Maintaining and growing this image is clearly the correct long-term strategy for our brand,” he said. “Unfortunately, we moved in this direction precisely when consumers’ disposable income and anxiety led them to cut back and focus on more economical and entry-level-priced products.”

Not that high prices are necessarily a bad thing. High-end retailers interviewed during the latest round of collections said price is rarely a deterrent for luxury customers — as long as the product is right. “Customers only get upset with us if we don’t have the right fashion,” said Ron Frasch, chairman and chief executive officer of Bergdorf Goodman. “It has to have innovation and distinctiveness.”

But complicating the picture for American retailers buying fall collections is the weak dollar versus the euro, which threatens to make European goods much more expensive. “Next season is not the time to see increases of 20 percent,” said Anne Stordahl, senior vice president and general merchandise manager at Neiman Marcus, referring to roughly how much value the dollar has lost over the past six months. “We’ve been pushing [suppliers] strongly [so] that we don’t see increases. If a customer doesn’t see the apparent reason why [the price] went up, there’s no motivation to buy. People are not in the mood for exorbitant and superfluous prices.”

Stordahl stressed that she doesn’t advocate cuts across the board, but added with a grin, “I’ve never seen a customer complain if we give them true value.”

But how low can luxury go in terms of price, before it starts to cheapen the brand image?

To be sure, many luxury boutiques have some surprisingly affordable items woven into the mix. Yes, Hermès has a crocodile handbag that retails for more than $100,000 at its Paris flagship, but there are also $37 coin dishes and fruit-shaped key rings for $75. Likewise, Christian Dior has $175 versions of its famous “Saddle” handbag and $55 silver earrings. Several luxury analysts noted the recent proliferation of affordable logo items at such stores as Fendi, Gucci and Prada.

Some luxury executives are defensive about the charge that they have gone downmarket with democratic prices. “Prada has never used the approach of offering lower-priced products to reach more customers,” a company spokesman said. “Even the high tech nylon items have been introduced and treated as luxury items.”

Christian Dior is probably the most democratic purveyor of luxury, given its recent emphasis on “J’Adore Dior” T-shirts, which retail for about $145, and low-cost accessories like denim pocket squares and wrist cuffs. But Dior president Sidney Toledano noted that the average price of a Dior handbag actually went up in 2002, to $600, and that the “average basket,” or the average amount spent by consumers in a single visit, also rose last year. He noted that customers even have the option of ordering handbags from its couture atelier.

Still, he defended the advent of opening-price items as crucial to attract and engage young customers who want a piece of its brand. “We’re preparing them to buy the real thing,” he said with a chuckle. “Hermès does it. Vuitton does it. The lower-price products don’t contribute a lot to the total business. It’s for aspirational customers, to bring them into the store and to convert the customers to the brand.” But Toledano stressed that even affordably priced items for the young set must have all the “quality and details” of more expensive items.

Rita Clifton, chairman of Interbrand Corp., said fattening the offer at either the top or the bottom of the price tier is not necessarily a hazardous policy. For example, she said, Giorgio Armani does a “very good” job in subtly signaling to customers that Emporio Armani and Armani Jeans are “a different type of Armani” from the top line, but still positioned at the upper end of the sector in which they compete. Likewise, affordable products at Dior are targeted at a “younger, racier” customer who is still spending more for a like product at Dior than she would elsewhere.

Of course, everything has its limits.

“If people are hearing more about your brand from the bottom end rather than the top end, that’s a recipe for taking a brand downstairs,” Clifton warned.

Ironically, could companies that energized their brands by reversing the freewheeling licensing of yore be heading down that same path themselves? Bergdorf’s Frasch called it a “huge mistake” for a luxury brand to sell and produce logo bags and other low-cost items. “Most [luxury houses] have to do it, because they’ve opened up so many stores around the world, and you have to sell something,” he conceded. “But I think at some point it will catch up to them. We won’t be buying those entry-level price points.”

Armando Branchini, vice president of consulting firm InterCorporate in Milan, agreed that fashion companies trying to generate as much revenue as possible in tough times may ultimately pay the price in terms of their image. “In the last 10 years, these companies have made their growth strategy out of increasing the size of their consumer base,” he explained. “But when there is an economic recovery, these companies will see a downgrade of their brand positioning. I think it is very negative.”

Even in Japan, battered by a decade-long recession, companies including Hermès, Bulgari and Louis Vuitton continue to raise prices. Yves Carcelle, chief executive of Louis Vuitton, noted that in Japan, Louis Vuitton items priced over $500 sell better than those priced less. “We believe the strategy of lowering prices in a crisis is the wrong solution,” he said.

But Chiara Tirloni, an analyst with UBS Warburg, cited Tiffany as one example of a brand that has managed to offer a vast price range of items without losing its luster. “Tiffany demonstrates that a low price point doesn’t necessarily mean losing luxury status,” Tirloni said. “It’s all in the execution. These brands have many stores all over the world. They have to adopt product strategies that keep attracting customers, increasing store traffic and generating sales.”

And Majed Al-Sabah, owner of the luxury emporium Villa Moda in Kuwait, said he spies great potential for selling low-ticket items — key chains, cell-phone straps and the like — even if many brands resist for fear of diminishing their snob appeal. His enthusiasm hasn’t been diminished by the war in Iraq; Al-Sabah all along has insisted that the war, in the end, will only be good for business because it will ease the region’s political uncertainty. He already has plans to open another Villa Moda in Kuwait and even talks of opening one in Baghdad one day.

“I think they [brands] are underestimating the category. My customers, they buy items like that in bulk,” he said. “One of the exceptions is Dior. To me, they are absolutely clever because they diversified [their price range].”

Andrea Ciccoli, vice president of Milan-based consultancy Bain & Co., warned that fashion houses that produce cheaper versions of hit items may devalue their integrity. However, he allowed that accessible items like T-shirts can work if they are fun, fashionable and grab the customer’s attention.

“It’s the impulse buy that is responding best in this market,” he said. “What the customer needs is fresh, exciting things, but not necessarily at high prices.” He believes the key is being innovative and fashionable with cheaper products, but staying “consistent with the brand image.”

De Sole agreed that consistency is the golden rule when it comes to pricing, recalling that during the Asian crisis in the late Nineties, the decision to hold firm on prices served the company well.

And even if the United States is in a prolonged economic downturn and a war, he noted, “I don’t think simply cutting prices is going to fix it. Tom feels very, very strongly that we have to have the highest quality. It’s not just an issue of pricing. At the end of the day, we want to offer a very good value.”