Betsey Johnson has always done things her own way and in her own time, and her first fragrance, due out this fall, is no exception. 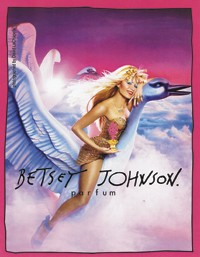 NEW YORK — Betsey Johnson has always done things her own way and in her own time — and her first fragrance, due out this fall, is no exception. While she’s aware that she’s launching her scent during a jam-packed season, the quirky designer seems unfazed by the maniacal market competition that awaits her.

“We have wanted and needed a fragrance for so long,” said Johnson during a recent interview at her Seventh Avenue showroom here recently. And she was definitely hands-on, helping to develop the fragrance, a fruity floriental, in cooperation with Mane USA, Colorful Licenses and the Karis Group. It has top notes of juicy pear, tangerine, grapefruit and black currant; a heart of freesia, lily of the valley and apple, and a drydown of cedarwood, sandalwood, praline, amber and musk. While the rose is a Johnson apparel design symbol, there’s no rose in the fragrance formula. “I figured, screw it, as long as it smelled good,” Johnson said. “There’s a good balance of flowers, food and fruit.”

So far, Johnson said her personal test group — her daughter, Lulu, and several male friends — has given it a stamp of approval. “And I love that Lulu loves it — she can be critical about these things!” (Lulu also produced another of the designer’s passions: her first granddaughter, Layla, born in March.)

Equally important to Johnson was the perfume’s bottle. “I’ve bought perfumes just for the bottle — even when I hate the smell!” she said, noting that she’s accumulated quite a collection of them over the years. The Betsey Johnson fragrance bottle is modeled after what she calls a “grandma-funky, musty-misty” bottle she found decades ago, but brought up to date with signature Betsey touches, including a flexible fuchsia fan-like top. “What I liked about this is that you can throw it in your purse, but when you put it on your dresser, it’s an absolute trip,” she said. Eaux de parfum in two sizes — $55 for 50 ml. and $75 for 100 ml. —will be offered, as will two ancillaries, a 200-ml. bath and shower gel for $28 and a 200-ml. body lotion for $28.

The outer carton is a lively mix of leopard-print and rose patterns, with each side of the carton slightly different. “That way you can do a modern display, or a funky display,” said Johnson. “Then one day, we can float glitter in it, or change the design. It’s a trip.”

However, noted Kristine Spurney, vice president of Karis Group Ltd., “It’s not going to fit in the normal case line,” she said. “We’re going to work with individual retailers to find the display situation that’s best for them.”

The collection will be launched in Bloomingdale’s in August for a monthlong exclusive, then will roll out to select Macy’s, Nordstrom and Betsey Johnson boutique doors in September, for a total of 400 department and specialty store doors by yearend. The distribution will continue to build next year, said Spurney. A global launch will also ensue — Japan this fall, as Johnson opens her first freestanding Betsey Johnson store in Tokyo, as well as in Russia and Dubai — followed next spring by the U.K., France, Italy and others, she said.

While none of the executives would comment on projected sales or advertising spending, industry sources estimated that the scent could do at least $15 million at retail in its first year on counter in the U.S.

While Johnson and her longtime business partner, Chantal Bacon, have run the Betsey Johnson label since 1978, the licensing blitz is something of a new development for the designer. Over the past three years, she has added licenses for shoes, lingerie, handbags, belts, eyewear, cold weather accessories, watches, jewelry, swimwear and home products. A perfume has been a goal for a long time, she said. “We’ve been approached a lot,” said Johnson. “But the distribution that other companies wanted to do was not consistent with the Betsey Johnson distribution, so we just held back.” Added Bacon, “That’s really what we’ve done with all of our licenses. Until we’ve seen the perfect partner, we’ve opted to wait.”

National print ads, which will begin running in September fashion, beauty and lifestyle magazines, are something of a departure for the Betsey Johnson franchise. “We always opened a new store, rather than advertising,” Johnson said. “It was always, ‘$100,000 there, or should we open a new store?’ So we always did our stores. Now, I’m in a different world because we are advertising.” She admits it was more critical for the fragrance: “If you don’t advertise, you don’t have a perfume,” she said.

David LaChappelle did the ad image, a stylized visual of Johnson draped on a swan. Unlike many other designers, Johnson is quick to point out the wonders of Photoshop and airbrushing. “It’s not really me, but I was really there,” said Johnson of the drop-dead bod depicted in the shot. Surveying her chest with a laugh, she added, “He gave me C-cups!”

Calling Lulu “my biggest adviser,” Johnson said she just decided to go for it with the ads. “Lulu said, ‘This is the time to be the fantasy, [the] most gorgeous.’ And I think that my customers will get the joke. It’s not high art — it is far-out art. All that money for a half-a-second flip,” she said of the advertising. “[Readers will] think, ‘She’s not Beyoncé — she doesn’t have tits like that!’ But they will say, ‘Far out — she’s looking good for old age! I like her spirit!'”

Johnson will continue to build the Betsey Johnson empire on a global basis this year. In addition to the fragrance and her first store in Japan this fall, she’s also contemplating doing a men’s wear line. “There’s a guy audience that keeps bugging me for men’s wear,” she said. How about a men’s fragrance? “We’ve already got one! The nose guy said something out of the blue about making men’s. There are two ingredients we’re adding to the women’s that twists it into the guys’ fragrance.” No word on when it will be launched, however.

Now that she’s finished her first fragrance and has a second nearly ready to go, Johnson has turned to designing another dream: a color cosmetics collection. She wouldn’t say with whom — “We haven’t signed the papers yet!” she said with a laugh — but she’s having a blast in the development process, she said. One thing is for sure, she promises: “We’re going to rock the counters!”

Not that she’s planning on abandoning fragrance. “I can’t wait to start designing the next [women’s] one — and it’s not going to be a little sister to this one,” she said. “It will be the difference between wearing a black sheath dress, very sophisticated, to a white, eyelet, ruffly dress. It’ll be going from Greta Garbo to Twiggy.”