Given his encyclopedic knowledge of costume history, the exhibition Christian Lacroix has mounted at the Museum of Fashion and Textiles here could have been a dense, academic exercise... 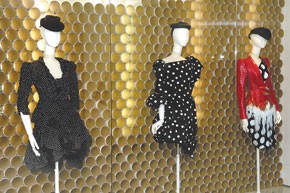 PARIS — Given his encyclopedic knowledge of costume history, the exhibition Christian Lacroix has mounted at the Museum of Fashion and Textiles here could have been a dense, academic exercise — especially since he meticulously inspected all 80,000 pieces in a collection spanning more than 400 years of design.

Far from it. “Christian Lacroix, Histories of Fashion” is a freewheeling and exhilarating survey of fashion’s infinite possibilities — vivid color, eye-popping patterns, transforming silhouettes — qualities exemplified in the couturier’s oeuvre for the past two decades.

The exhibit, which opened here Wednesday, caps a year packed with anniversary festivities for the 56-year-old Lacroix. But the designer didn’t want a retrospective.

“I wanted to show the richness of the museum,” he said during a brisk walk-through, stopping here and there to highlight a particular piece. “Without this kind of museum, I couldn’t be a designer.”

Lacroix selected some 500 items from the museum’s collection — the biggest fashion outing ever for the Paris institution — showcasing the pieces on hangers on plain metal racks, as if at some sample sale. Without period shoes, hairstyles or accoutrements, all the clothes assume a timeless, time-warp quality: a Comme des Garçons take on Victoriana is practically indistinguishable from the historical stuff.

The designer even mixed old treasures, some of unknown origins, with some of the 80 Lacroix couture creations displayed on mannequins. “The skirt is mine and the top is Paul’s — Paul Poiret,” Lacroix said, unleashing one of his gushes of laughter as he pointed at one ensemble. “I wanted to show all the periods mixed and matched.”

Indeed, many of the garments the designer selected are confounding. “I was so amazed,” Lacroix said, leading a visitor to a textured, green-and-gold knit cardigan laid flat on a sheet of glass. “This sweater is the most ancient thing they have, from 1610, and yet it looks like Missoni. It seems to be of the moment.”

Ditto for an look in flocked velvet for a doll dating back to 1750. “This leopard velvet is so Versace,” he joked.

Designs by many fashion greats are on display, including dresses by Jeanne Lanvin, Christian Dior, Elsa Schiaparelli and Madeleine Vionnet. And while the emphasis is on French fashion, Lacroix devotes an entire case to the work of American couturier Mainbocher, one of the revelations of his research. While familiar with the designer’s work, as famously worn by Wallis Simpson, Lacroix was astonished by the modernity and simplicity of the actual clothes, foreshadowing the Sixties by a good three decades.

“It’s glamour, but with a sense of everyday glamour,” he enthused about Mainbocher’s simple T-shirt dresses paved in delicate beading and embroidery. “It’s so pure, so new.”

Lacroix also put the spotlight on a suite of asymmetric capes by French designer Caroline Reboux that he described as “between a dress and a shawl.”

Clothes are arranged thematically — by color, pattern or inspiration — rather than chronologically, with Lacroix penning the text on the walls. “I’m not a teacher of fashion,” he stressed. “It’s something light and joyful.”

If Lacroix imparts any message, it’s the thrill of discovery he felt digging through the museum’s archives. “It was even beyond my expectations in terms of craftsmanship, inspiration and the combination of culture and elegance,” he said.

The designer left it to curator Olivier Saillard, the museum’s head of programming, to select the Lacroix dresses, which illustrate the couturier’s ability to mix various periods and references to create something new.

Lacroix designs from 1987 to 2000 — including his famous pouf skirts and baroque gowns — are displayed on the first level, while the upper floor shows the designer entering a more modern, abstract phase, when he swapped his sketch pads for computers.

While fashion has long drawn heavily on the past, it’s important to appreciate and anticipate the future, Lacroix said: “I think the exhibition is symbolic in my way of building tomorrow with something from yesterday.”

Lacroix also continues a dazzling pace of extracurricular projects. Next year will see him design costumes for “Romeo and Juliet” at the Opéra Comique in Paris, do garden furniture and other items for the La Redoute catalogue, plus head up two major events in his hometown of Arles, France: a solo exhibition at its Réattu museum and the photography fair Les Rencontres D’Arles.