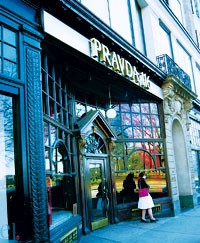 Before they even fully command the language, international students who flock to Boston master certain universal subjects: the shopping, the nightclubs and which cafes just might turn a blind eye to dogs and smoking.

“Prudential, Newbury, Copley,” recites one Boston University freshman from Korea when asked where she shops. Although she is too shy to give her name, she has no problem ticking off the city’s most upscale retail haunts, home to Dior, Louis Vuitton, Neiman Marcus, Saks and Chanel.

Chialan Koo, a junior at Boston University from Tonga, has discovered Miss Sixty, Miu Miu and Uggs during her college years, while burning through upward of $2,500 a month. Her friend Emi Tokunaga — a Japanese national who spent her precollege years at a London boarding school — finds Boston a relative bargain, fashion-wise, and hauls low-rise denim home to friends.

Manhattan may reign as the de facto global capital and certainly London, Paris and Tokyo pulse with jet-setters. But Boston cradles the international crowd when they’re young, during their halcyon school days.

It’s a crowd that’s sophisticated, stylish and, above all, moneyed. Since few colleges here dole out financial aid to foreign nationals and visas restrict student work opportunities, those who come are backed with full tuition (anywhere from $25,000 to nearly $40,000 annually) plus an estimated minimum of $2,000 in monthly living expenses.

“For me, it’s a dual existence, between my B.C. friends and the people I know from abroad,” says Alexandra “Sasha” Dizard, a Manhattan native attending Boston College after five years of schooling in Switzerland. “The social scene for international kids is very small. Everyone goes to the same places. You could go somewhere like Venu [nightclub] and you don’t hear English. It’s Spanish; it’s Turkish.”

As Dizard suggests, the international scene is a microcosm, with its own dress codes and its own hours (lunch at 3, dancing at midnight).

The crowd patronizes a limited set of joints that understand Continental leisure. “We used to be more restrictive but we’ve realized the American mentality didn’t have a basis with our customers,” said Matt Burns, a partner in the popular Armani Café, adjacent to the Armani store on Newbury Street. The cafe valets the Ferraris and Porsches and lets students push the patio tables together; in return the students tend to linger over drinks on weekday afternoons or Tuesday evenings after 10 p.m. (until the restaurant closes at 1 a.m.) when mainstream Boston is either in an Irish pub or in bed.

Manos Linos, promoter for club Pravda 116 on Boylston Street, uses a side entrance to the dance club-cum-lounge for the Middle Eastern oil princes and their retinues. D.J. Ghost, a Mykonos, Greece, native well-known in London and Amsterdam clubs, hosts Pravda’s packed, international Wednesday night, which has become an unofficial catwalk. If a woman shows up in a dynamite top, chances are the item will sell out at Intermix on Newbury the next day.

“The students are very social and if they like something the buzz comes up very quickly,” says Khajak Keledjian, Intermix’s owner, who estimates international students account for 60 percent of his sales. The retailer had to start a waiting list in October for a Chloé dress when fashionable students spotted it in online runway reviews. “These girls are on top of it. We end up selling more advanced product, more color in Boston than in New York,” he says.

Of course, there are some aspects of Boston that the global crowd finds irritatingly stodgy. Take, for instance, the city ordinance that shutters clubs and restaurants at 2 a.m. That makes for a mighty short night when the crowd has barely dressed and arrived at Caprice, Aria or Mantra by 11:30 p.m.

But all things change. “I can remember back in the early Nineties when no one here had cell phones except all the international students, which the average Bostonian found intensely irritating,” reminisces Armani Café’s Burns. “The attitude has changed since then. I think even the curmudgeons would say what the students bring to the city is pretty fascinating.”