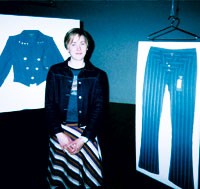 At Carnegie Mellon University, most visitors can answer that question simply by looking at what the students are wearing. In fact, even with the unlikely specialties encouraged by the school’s interdisciplinary curriculum, such as “architecture and biology,” there are signs of special interests. Most-Likely-to-Wear-Jeans-and-Muted-Sweatshirts? Engineering students. Most-Time-Efficient-Shoppers? Computer science-types, including fans of Geekwear.com. On the flip side, drama and art students are more inclined to wear vintage finds and trendier clothes.

Hard to imagine the campus in its early days nearly a century ago, when Andrew Carnegie founded the university to give blue collar kids a crack at an affordable education. These days, Leonardo da Vinci is CMU’s poster boy. The university pitches itself as “The da Vinci Effect,” a cheeky reference to its students’ ability to harness both their left and right brains. But this intellectual collaboration across all categories seldom carries over into personal style.

“In the elevators, you can tell by the way people are dressed which floors they are going to,” says fine arts senior Cay Yoon. “Art students wear colorful clothes, architecture students are pretty similar, music majors are very dressed up, and engineering students don’t wear anything too colorful.”

Esther Yu, a junior who is studying engineering and physics, says students aren’t overly into fashion. “It’s balanced; it’s not ditzy-ish. Sometimes you see people with purple hair and random clothes. But most of the students are academic-driven so comfort comes first.”

At the other end of the spectrum, junior Kate Marilley, a musical theater student, maintains that experimentation is the norm among her friends. “We experiment with different fashion statements, different hairstyles and different personalities,” she says.

But even business students are discouraged from being homogenous. Community service work is a mandatory part of their curriculum, as is taking golf lessons.

Former CMU students share that freewheeling individualism. Andy Warhol may be the most widely recognized former CMU student, but he never graduated. John Currin, Ted Danson and Holly Hunter actually picked up degrees. While Danson might not be winning any best-dressed awards, Warhol and Currin shared an avant-garde spirit and Hunter was seen front-and-center at a recent Vera Wang fashion show.

Today’s student body continues this tradition of forward thinking. Senior Courtney Chu has built a business designing and selling customized dresses and clothes made from T-shirts donated by corporate donors and recruiters. Then there’s Lillith Bailey-Kroll, an art student whose latest photography exhibition is definitely pushing fashion boundaries, in more ways than one.

Her exhibit at the Regina Gouger Miller Gallery on campus features photographs suspended from the ceiling. On one side of each placard is an image of an item of Vivienne Westwood clothing she purchased from various stores, and on the reverse sides are pictures of some nondesigner clothes to which she’d attached Vivienne Westwood tags and then returned to the store, passing them off as the real thing. Bailey-Kroll says she was exploring how value is created. “The thing I became really interested in was when I had the article in front of the salesperson [to be returned]. Then it was about authenticity and social morals,” Bailey-Kroll says. In total, she has purchased and returned 30 pieces, totaling $5,000 worth of designer merchandise, from discounters and other stores not familiar with the collection. She says that after much research on shoplifting, she couldn’t find anything illegal about her actions.

Such activities are the norm for CMU students. Consider graduate student Fereshteh Toosi, whose current exhibition is “Nomadic boudoir genie bottle canopy bed tent nest” — basically a gigantic genie bottle made of knitted yarn and suspended from the ceiling in the Regina Gouger Miller Gallery.

Even “Valerie,” the world’s first storytelling “roboceptionist,” has her own distinct style. From her computer screen in a booth in the Newell-Simon Building lobby, the animated receptionist greets visitors by batting her eyes, and is quick to share her disdain for dating vacuum cleaners. Her sensors pick up when people are nearby, and people can in turn communicate with her by using her keyboard. The result of a two-and-a-half-year collaboration between researchers and students in CMU’s Robotics Institute in the School of Computer Science and the School of Drama in the College of Fine Arts, Valerie is “The Da Vinci Effect” in action.

Another example of this interdisciplinary approach is a project that’s under way for New Balance in CMU’s Integrated Product Development course. A team of engineering, business and design students is developing athletic apparel for weekend athletes. Last year CMU students invented “smart shirts” for athletes with sensors that encouraged proper breathing. The prototypes were such a hit that New Balance divvied up what it would have spent to patent the project among the students and partnered with CMU again this year.

But IPD students aren’t winning any best-dressed awards. “Many of our students look like they slept in their clothes, and they often do,” says IPD professor Craig Vogel. “There’s a stereotypical statement about engineering students regarding style that probably has some validity.”

For a university that bucks so many other norms, it’s almost refreshing to see that at least style-wise, some traditions don’t change.